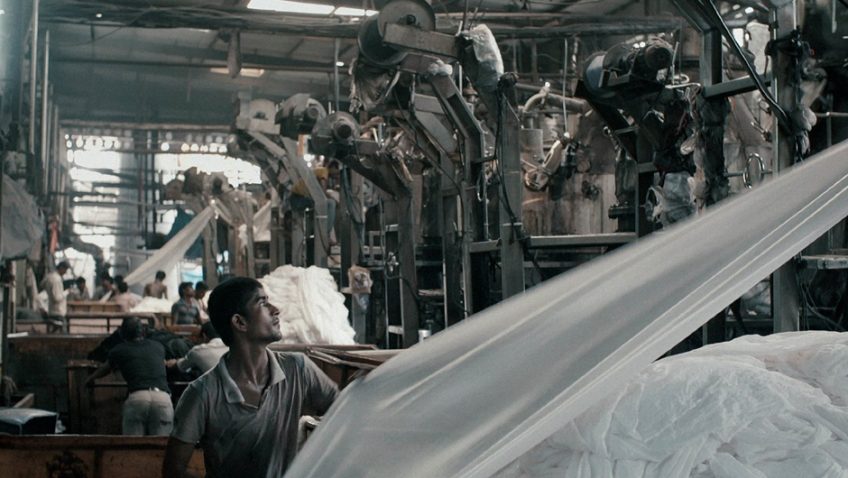 Before the first image appears, we hear the monotonous, relentless din of machines. The film is defined by this acousmatic orchestra clanking, rumbling, grinding, and banging like a mournful dirge that echoes in our minds long after the final image. The title, Machines, may describe the wood and metal orchestra producing these sounds, but the word also refer to the workers, meant to toil like machines in inhumane conditions.

The machines we hear and then see are in a vast, damp, dark factory in the state of Gujarat, India’s westernmost state. The factory is, however, one of many in the $US40 billion garment industry that employs some 45 million workers, roughly a quarter of whom are children. 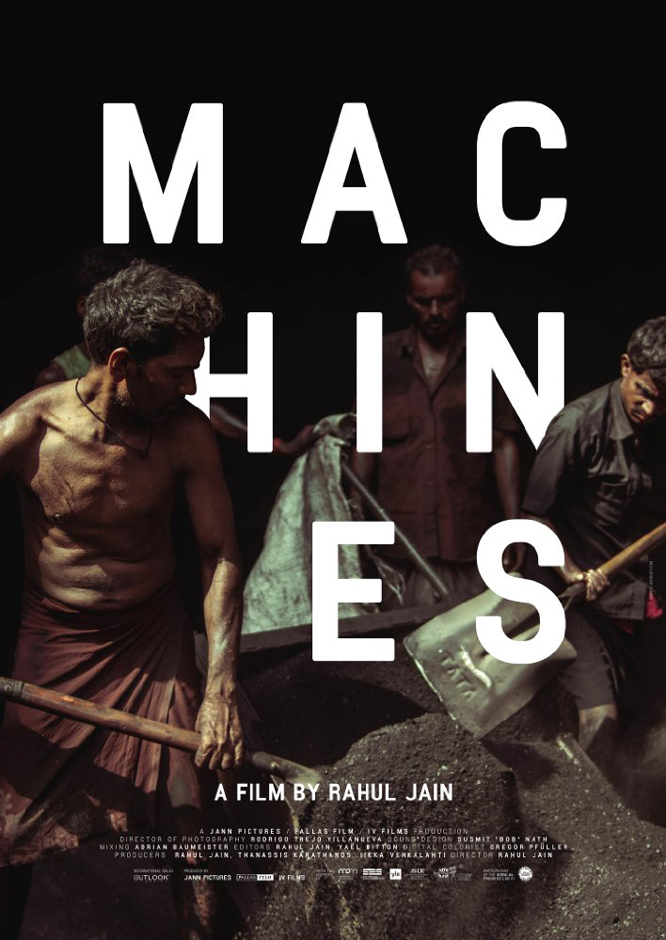 First-time filmmaker Rahul Jain immerses us in a vast Dickensian workshop that soon becomes unbearably stifling. He shoots roughly the first 20 minutes of his 71- minute film without dialogue, captions or music, the only sound being the sound effects from the environment. The monotony, the tedium, the isolation and the danger workers encounter in the factory come across louder than any narration.

It might be broad daylight outside, but our first glimpse of sunlight comes more than halfway through the film when we see workers go outside to dump filthy sludge into the surrounding landscape where little children forage. The factory’s harmful ecological footprint outside is just another by-product of the exploitation taking place within the factory.

Barefoot men walk down long corridors that are partly flooded with dirty water or some other liquid, while others are pushing or carrying heavy loads. Men stand at a hot, belching furnace without protective gear, while other men and boys stand beside the various machines hour after hour guiding the material through. One young man is struggling to stay awake, drifting in and out of consciousness.

When the interviews begin we learn from one employee that he works from 8am to 8pm, and then, after an hour’s break, begins a new shift. For a 12-hour shift, he earns about $3.00. He has to borrow 10% of his wages for a train ticket to the factory, but has to stand up during the 36 hour commute as the train is always crowded. ‘The only money I spend is on chewing tobacco,’ the man tells us. Cigarettes are more expensive and do not last all day.

The single interview with the factory boss tells us another story. He contends that the workers spend their money on alcohol and cigarettes. His opinion is that 50% of the workers, whom he describes as ‘illiterate,’ as though it is their fault when even primary school education costs money, don’t care about their families and do not send money home. He claims that they are too relaxed and well fed, as a result of which productivity is decreasing.

A large group of farmers, forced into the factory after a drought ruins their crops, do not feel well fed. Neither does a frustrated man who explains that if the workers united in a union they could achieve an 8-hour work day. As it is, ‘we get no holidays, no bonus or sick pay,’ he complains. But it won’t happen because, ‘if there are problems with union leaders, the bosses get together to finish him off.’ In addition to violence against would-be union reps, the unions struggle to compete with the contractors who will loan cash to desperate workmen. The unions cannot compete.

First time writer/directors are advised to make films about what they know, and although educated far away at the prestigious California Institute of the Arts, where tuition fees are $US 45,000 a year, Rahul Jain knows about these factories. The film originated as a school project at CalArts, but the images were formed in Jain’s youth, when, as a five-year-old, he wandered around his grandfather’s textile mill as though it were a forbidden Gothic fortress.

It is unfortunate that Jain’s connection with the factory is not made known in the documentary. In the production notes he explains that his connection to the factory is why people were so reluctant to talk to him, but this is kept from the audience. Jain’s decision to begin his career with this grim, but strong social message is also more meaningful if the viewer realises that Jain made a conscious effort to tell the expose the exploitation that sent him through university.

What is fortunate is that there is no narration and we never see Jain or hear his questions. The interviewees sit facing us (and only once do we catch a hint of an interviewee questioning Jain’s motives). Jain’s inconspicuousness leaves us on our own with only the invisible camera as our guide through this purgatory, until we are as eager to escape from the stifling heat as are the workers. We can almost appreciate how one boy feels as he describes the dread of a new day: ‘When I arrive at the front gate I feel like turning back. You have to work 12 hours. My gut tells me to turn back, but it’s not good to go back.’