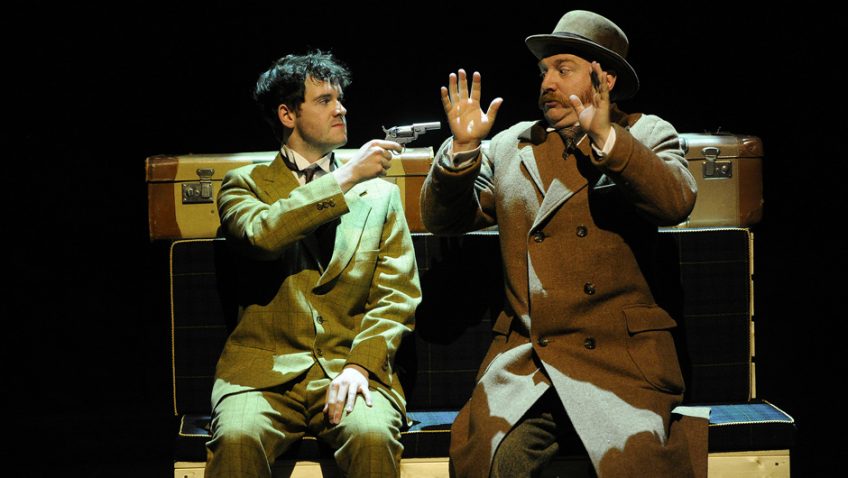 Conan Doyle, you will remember, got fed up writing about Sherlock Holmes and killed him off and he would have remained at the bottom of the Reichenbach Falls had it not been for American actor-playwright William Gillette deciding he wanted to act the most famous detective in the world on stage.

The play opened on Broadway in 1899 and such was its popularity (Gillette played Sherlock 1,330 times) Doyle was forced to bring the detective back to life. Shaun Chambers in The Hound of the Baskerville

It was the play, not the story, that popularised Holmes’s iconic deerstalker and it was the play that made Professor Moriarty a household name.

There have been well over 300 adaptations of the Sherlock Holmes stories in the theatre, cinema, television and radio. There has been a musical and even a ballet. Sherlock Holmes on ice is eagerly awaited.

There are those who rate The Hound of the Baskerville as one of the best ghost/crime stories ever written. The most famous film version remains the 1939 one with Basil Rathbone and Nigel Bruce as the definitive Holmes and Dr Watson, though Bruce was nothing like Doyle’s Watson.

The only actor to seriously rival Rathbone has been Jeremy Brett on television. Edward Hardwicke was his Watson.

Robert Downey Jr and Jude Law and Benedict Cumberbatch and Martin Freeman are a modern aberration.

The present stage adaptation by Steven Canny and John Nicholson is written for three versatile comic actors who have to play 14 characters and do all the costume changes and all the silly business at incredible speed.

The timing of Shaun Chambers, Max Hutchinson and Simon Kane, verbally, physically and facially, is spot on. They are hilarious in bathhouse, in bed and travelling by train.

Chambers, a natural farceur, has a spectacularly quick change when he walks behind a mantelpiece and comes out the other side without his trousers.

Kane raging about puzzles and jigsaws is splendid and he could easily be cast as Watson (in the Bruce mould) in any serious Sherlock Holmes production.

Lotte Wakeham’s production is very enjoyable and will appeal to audiences who have enjoyed the Alfred Hitchcock/John Buchan 39 Steps spoof and the productions of the National Theatre of Brent and The Play That Goes Wrong company. It deserves a transfer to the West End. It could easily have a cult following.