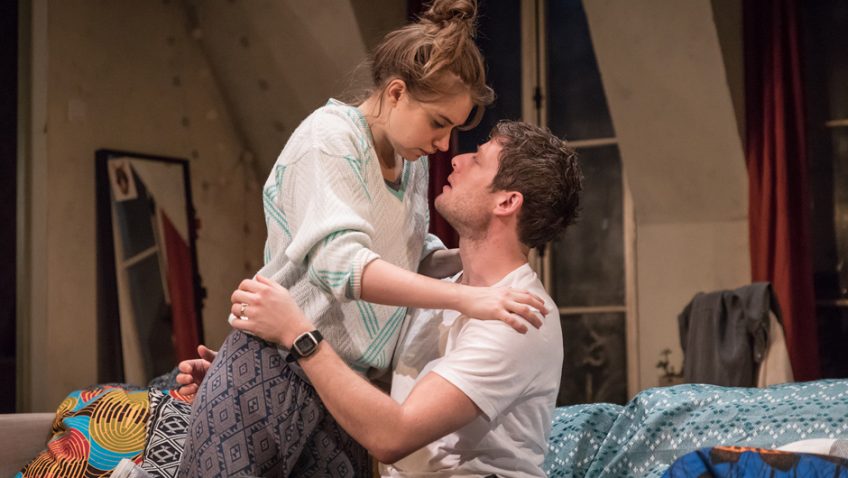 Two young Americans are having a bad time in Paris

American playwright Amy Herzog has won a number of prizes for her plays. Belleville premiered at Yale Repertory Theatre in New Haven, Connecticut, in 2011.

An American couple, recently married, are living in an apartment in Belleville, a bohemian Paris suburb. The marriage is already on the rocks. She’s neurotic. He’s a liar. They are both on drugs; she on medicinal, he on hard. He wishes she had never asked him to marry her. She wishes he had never said yes. He was only 22 and she was 25. A romantic dream has gone sour.

She is an actress who also teaches yoga; but the students don’t turn up. He’s a doctor combating infant disease; but he’s been fired from his job and he can’t pay the landlord the rent they owe him.

She misses her father, her dead mother, and her pregnant sister. She should have married a man with a much stronger character who could look after her.

There are various options such as eviction, separation, divorce, go home to daddy, commit suicide or murder. The audience gets worried when she starts cutting her toe nails with a large kitchen knife.

The acting’s very good. James Norton and Imogen Poots are cast as the self-obsessed, vulnerable couple, unable to cope with the pressure and succumbing.

The actors and Michael Longhurst, the director, went to Belleville to do research and they also talked with marriage counsellors, experts in co-dependence and experts on lying.

The play will probably appeal to marriage counsellors, experts on co-dependence and liars.

The final scene, which comes after the play is over and has two actors cleaning up the mess the couple have left behind, adds nothing and could be cut.