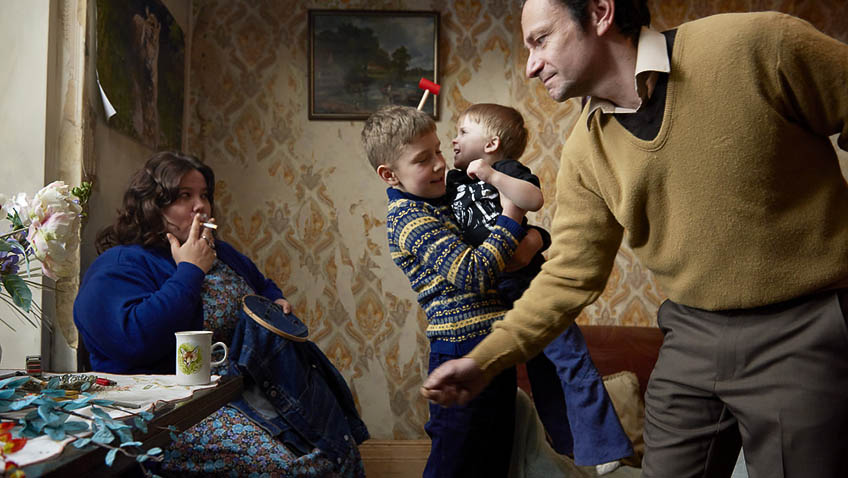 laid the foundations for what would be two short films, entitled Fish Tank and Ray respectively, and, 22 years later, his first feature film, Ray & Liz. But the inspiration for the book itself was Billingham’s childhood in Cradley Heath in the Midlands. The title Ray’s a Laugh

is deeply ironic as anyone subjected to the opening five minutes of the riveting, grotesque yet compassionate and subtly political Ray & Liz will realise. 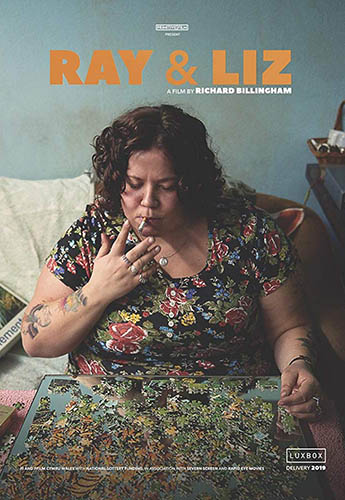 Shot on 16mm by cinematographer Daniel Landin, the gorgeous images belie the unpleasant and sometimes plain ugly subject matter. If anything, each shot is painstakingly staged to a fault, but Billingham frames with a photographer’s eye and the décor and costumes are extensions of the characters and expressive of their lives.

An unshaved, pale man, Ray, (Patrick Romer) who might be in his fifties, wakes up in a squalid bed room and immediately reaches for a fag and the first of many glasses of a dark liquid lined up in plastic litre bottles on a table. Billingham treats us to a stomach-turning close up of the man downing an entire glass of this home-made brew in one go before reaching for another.

The man with dead eyes then goes back to bed, only to be awoken by a neighbour: a hirsute 30-something man putting refills of the sickly liquid on a woman’s dressing table. He sees a photo – the only decoration in the room – and, mumbling a swear word, throws it out the window. It seems Ray is a prisoner in his room and the connection with his previous life is not yet apparent. This unprepossessing vignette has more of Samuel Beckett’s Malone Dies

in it than of Terence Davies’ Distant Voices, Still Lives.

The image of older Ray in his bedroom fades out with older Ray looking out the rainy window from an upper storey. It is linked in a kind of flashback with younger Ray (Justin Salinger) staring out the window of his neglected, seedy and dreary council house in the 1970s. 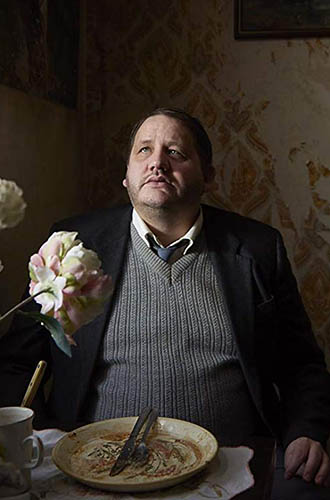 Liz (Ella Smith), an obese and chain smoking crossword puzzle fanatic, sits at a table arranging flowers, doing embroidery or putting together puzzles of jungle scenes. Somewhere under all that flesh and self-abuse is a pretty face and it is perhaps that Liz from happier times who is served endless cups (with fox heads painted on them) of tea by her doting, recently redundant husband.

Liz is surrounded by her own jungle, complete with a menagerie of animals including a dog, cat, hamster, birds and fish – just the germ-carrying accoutrements you do not need in a house that looks like it has never been cleaned.

Two-year-old Jason (Callum Slater) is banging away on a hand-eye coordination toy in the living room while his 10-year-old brother Richard (Jacob Tuton) is sent off to get Ray’s mentally-challenged brother Lol (Tony Way) to come over to child-mind. Liz, Ray and Richard buy new shoes with Ray’s redundancy money. Lol’s mother (who has a broken arm) does not want him to go, and Lol is weary, asking several times if Will (Sam Gittins), Ray and Liz’s lodger, is home.

Liz is intolerant of Lol’s disability – he repeats himself a lot – and swears at him. Just why Ray mentions the vodka and brandy Liz purchased with Ray’s redundancy money is anyone’s guess, but Liz, spreading her imposing body in front of a cowering Lol, threatens to ‘pummel’ him with her ringed-fist if he touches the booze. 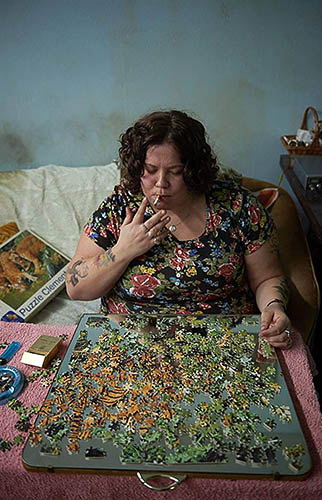 Naturally, Will takes advantage of the family’s absence to bully Lol, proving his fears were justified. Lol tries to distract or pander to Will by telling him about the booze. But the victim is the hapless Lol to whom Will shows no mercy, quietly disappearing before Liz and Ray return home to find little Jason soiled and holding a large knife in his hand. The long, increasingly tense scene is one of the most intense and horrific you will see all year. It has all the elements of a home invasion film, like Michael Haneke’s Funny Games, but more chilling in its authenticity.

The plot of Ray & Liz is the destruction of a working class family, surviving more like animals than human beings in a cycle of unemployment, neglect and hopelessness. It is structured around a series of vignettes in different time periods that, in the end, paint a picture in which little Jason becomes increasingly important.

We are fast forwarded in time when teenage Richard (Sam Plant), now with glasses, seems to be doing well in school while Jason (Joshua Millard-Lloyd), who has grown pudgy from feeding himself carbohydrates and sugar, is foundering and up to no good. Putting chilli power down his sleeping father’s open mouth might be an innocent practical joke, but Jason is heading nowhere fast.

There is great tenderness in how Billingham looks back at his dysfunctional family and on himself. When he is invited over by a friend’s kindly mother he tastes a normal, if modest, family’s warmth and comfort. After this experience Jason might, be prone, like the boy in the recent, Oscar nominated film Shoplifters, to commit an act that is a subconscious cry for help. On his way home in the dark, Jason gets lost and seeks shelter in a freezing shed where he is found and put into care.

The casting is superb, right down to the characters’ authentic Midland’s accent and the performances are so natural it is hard to believe we are watching actors. But Ray & Liz is far from a documentary and Billingham’s artistry is always evident, even, at times self-consciously so. It is not an easy film to sit through, but it is engrossing and will stick with you long after other films are forgotten.