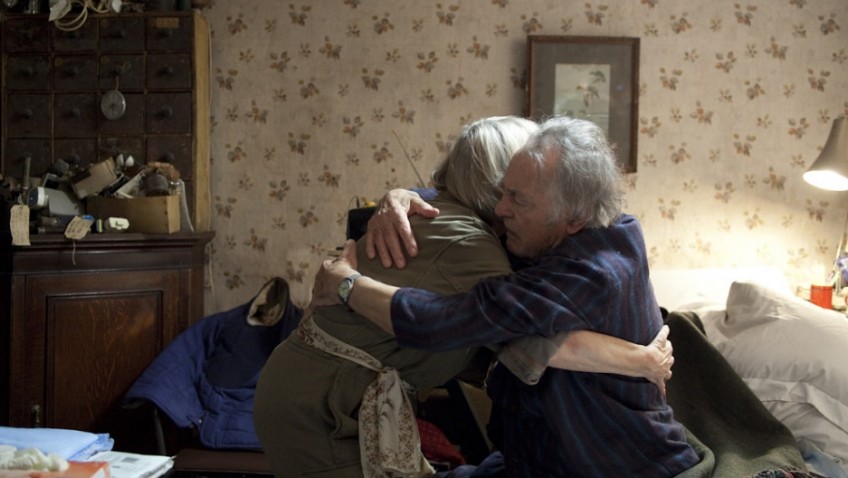 Actor and writer Tom Browne might not be in the same league as Michael Haneke, but his directorial debut, Radiator, is quietly powerful and darkly moving enough to be considered the UK’s answer to Haneke’s Academy Award winning film Amour.

Both films provide superb, challenging vehicles for elderly actors and increase our understanding of the final stage of a couple’s life together. Here, though, the elderly couple do not live in an elegant, immaculate Parisian flat but in a cluttered, rodent infested pile in Cumbria. And unlike Amour, where the self-sustaining elderly couple reject their only daughter’s intervention, here, the only child, Daniel (Daniel Cerqueira) is a godsend to his mother (Gemma Jones), selflessly tending to her irascible, selfish and bed-ridden husband (Richard Johnson). 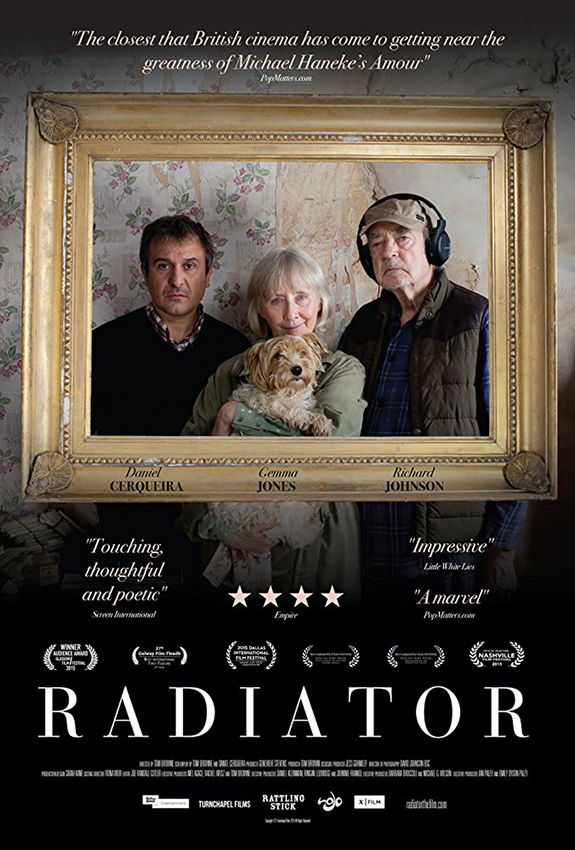 What Browne loses in production values and monumentality, he gains in the very personal nature of his script (co-written with actor, and co-star of the film, Daniel Cerqueira). Browne and Cerqueira wrote the script while Browne’s elderly parents were still alive and living in the very house in Cumbria where the film was shot. They continued writing it after death struck.

Browne experienced the same strained relationship with his father as Daniel does in the film. Maria, played by 72-year-old Jones and Leonard, played by 88-year-old Johnson, who died in June of this year, are replicas of Browne’s parents. A tragic event toward the end of the film might seem conveniently ironic after Leonard is finally persuaded to sign a will, but it really happened.

The story begins when Maria calls her son, Daniel. Leonard, lying in his own waste, will not move from the living room sofa. Daniel, not an actor, but a special needs teacher in London, travels to Cumbria for a few days to help out. The film contrasts Daniel’s uncomfortable stay with his parents in the beautiful Lake District with his simple life in London where he lives alone in a small, drab flat looking out at construction work. He seems to derive some satisfaction from helping children to read, a satisfaction that his father denies him. Daniel inherited his love of reading from his mother who read to him as a child and reads to him during his visit.

While Daniel often feels like a helpless outsider in Cumbria, he does manage to call in social services so that Leonard is bathed and installed in a suitable bed. And he manages to liberate his mother so that she can leave Leonard for the weekend and attend a wedding. There are brief moments of dark humour mixed with tension and there is very moving father-son contact when Daniel and Leonard are left alone together. Try as Daniel does to reach out to his father it seems that Leonard’s contrary and ungracious character is made worse by the onset of dementia.

Like Amour, Radiator rings true where 45 Days did not. The fact that it is, for the most part, true, is not the reason as the average viewer will not realise it is based on a real family. Viewers will know, however, that it feels real, and, without so much as a back-story, you can imagine that Maria and Leonard have been married all those years. Their house feels like their house and no film set has ever felt more lived in.

The deeply resonant and moving performances from Jones (Sense and Sensibility, Bridget Jones Diary, You Will Meet a Tall Dark Stranger) and the late Johnson (The Boy in the Striped Pyjamas, Deadlier than the Male, Danger Route, Khartoum) are no less courageous than those of Jean-Louis Trintignant and Emmanuelle Riva in Michael Haneke’s Amour.

First time directors are warned to stick to a subject they know about and Browne has reaped the rewards of that advice. He has also managed to stay clear of anything corny or twee, while avoiding sentimentality, stereotypes or, ironically, a vision too bleak to be entertaining. For this very low-budget film inhabits the everyday richness, deprivation and entropy of life passing. And Radiator presents this life as something universal while so intensely personal that we feel like intruders who cannot look away.