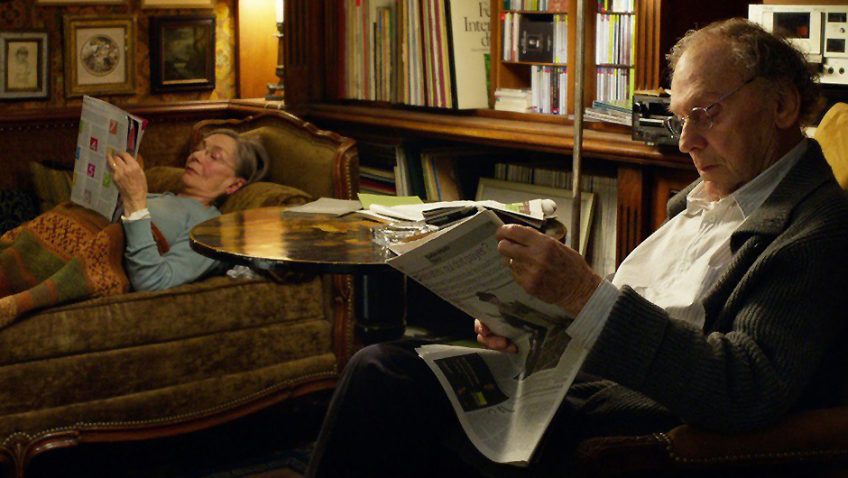 A visceral emotional experience that is impossible to forget

With his fixation on the anxieties of the bourgeoisie; repressed desires under authoritarian control and a deceptively detached style that shuns sentimentality, writer/director Michael Haneke could be the Buñuel of the 21st century.

In any other hands, his 12th feature, Amour

(Love), about an active octogenarian middle-class couple suddenly forced to deal with a debilitating stroke, would be a maudlin melodrama. But Haneke’s ability to elicit emotional responses without recourse to sentimentality, clichés or condescension, gives us instead one of cinema’s greatest love stories.

With the exception of an early scene in a concert hall, we never leave the well lived-in, elegant Parisian flat of former music teachers Georges and Anne (screen legends Jean-Louis Trintignant and Emmanuelle Riva), whose long relationship exudes love, friendship and mutual respect.

One morning, their comfortable routine is interrupted when Anne suffers a stroke. Georges, who cannot at first recognise the symptoms, reacts angrily to his partner’s uncharacteristic behaviour. When Anne returns from hospital with a disappointing prognosis, he rises to the challenge of nursing his wife in their home.

might be the only film where euthanasia is not treated as a contentious issue but an expression of a spontaneous inevitability. Equally insightful is the dignified Anne’s reaction to the visit of her former student, Alexandre (played by the Pianist Alexandre Tharaud) and by the couple’s distressed, unhappily married, daughter Eva (Isabelle Huppert). Though well-meaning, these visitors are intruders in a cocoon carefully constructed by the couple’s close bond.

Riva, who began her career at 26 with the beautiful, but tragic love story Hiroshima Mon Amour gives another tour de force performance here at age 85. Trintignant (The Conformist, Z, My Night with Maud, A Man and a Woman), who was lured out of retirement by the script, masterfully portrays a man in limbo between the land of the living and the dead.

The only humour in the film is the recognition that Haneke has cast Huppert, who starred as the sadomasochistic teacher in his break-through film The Piano Teacher, in the daughter’s role. But there is a further significance to this choice. The couple’s daughter, locked out of her parents bond, is, like the heroine in The Piano Teacher, another lonely, troubled woman facing her own particular demons and unable to understand her parents who are, for the first time in their happy marriage, struggling to cope with life’s discomfiture.

At 70, Haneke uses his trademark chilling, sharp and meticulous technique, his humanity, and his amazing cast to craft not only a ground-breaking, riveting film deserving of its Palme D’Or at Cannes, but a visceral emotional experience that is impossible to forget.