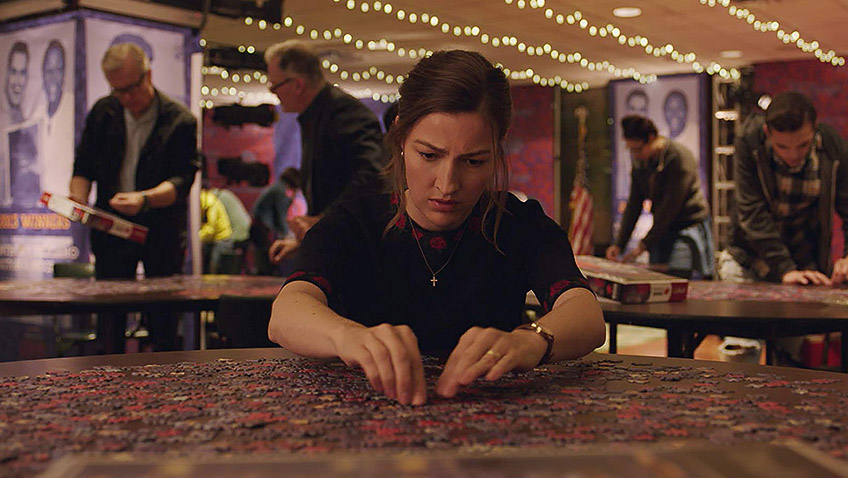 The under-used Kelly Macdonald is compelling a leading role, but she never feels real

Marc Turtletaub, who sold his American subprime lending empire to become a film producer, has turned to directing. Surprisingly, for his second attempt behind the camera (after the unreleased Gods Behaving Badly), he has adapted Natalia Smirnoff’s Argentinean, modest, sensitive feminist film, Rompecabezas (Puzzle). If Puzzle is uneven and misses the boat, the casting and acting is generally excellent. But best of all, Turtletaub has given 42-year-old Scottish actress Kelly Macdonald (No Country for Old Men, Gosford Park, TV’s State of Play) the leading role as a downtrodden suburban housewife with hidden talents. 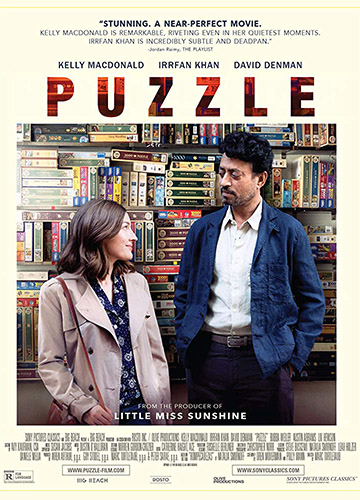 Not very long ago when actresses over 30 were cast as mothers, they remained in the background so that we could focus on their child’s coming-of-age- or their husband’s noble and/or heroic pursuits. It was assumed that wives derive satisfaction from the school run and manage to sleep soundly through their husband’s snoring. Now things are starting to change. In last month’s The Escape a suburban wife and mother of two flees to Paris on Eurostar to see if art could fill the emptiness in her life. Now Kelly Macdonald plays a housewife of 20 years and mother of two who escapes to Montreal through her talent for jig-saw puzzles.

When the film opens, a 40-something housewife, Agnes (Macdonald) is cleaning, cooking and preparing the house for a party in the NYC commuter belt. In her drab clothing and with her make-up-free face and stringy hair, she could be the maid, but we quickly realise that she is the hostess.

When her tipsy husband Louie (David Denman) breaks a porcelain cup, Agnes instinctively picks up the pieces to glue them together – as one would a jigsaw puzzle. When Louie prevents her from finding the last piece (a symbolic mistake) and patronisingly tells her to enjoy the party, she removes a perfect cake from the oven. As the crowd gathers to sing happy birthday, we realise that it is Agnes’ birthday. She has made her own party for others to enjoy.

While Agnes is clearly disappointed in her two gifts, they change her life in a film that is all about a predictable character-arc. The first gift, from her family, is her first mobile phone and the second (we assume from an aunt with a broken foot) is a 1,000 piece jigsaw puzzle. Not just any puzzle, but a none-too-subtle and symbolic map of the world puzzle. The world that has eluded Agnes.

After a day of assembling and re-assembling the puzzle she starts to time herself. Her newfound passion prompts Agnes to make a rare journey to a puzzle shop in NYC to buy two new ones. While in the shop she notices an intriguing advertisement for a competition partner, and, using her new phone, texts her future puzzle partner, Robert (Irrfan Khan, The Lunchbox).

Naturally, Robert is exotic, rich, recently divorced and brilliant. Unlike Louie, he is interested in Agnes and cognizant of her talent. Robert made his fortune with an invention and won last year’s puzzle competition, but when he sees Agnes in action, he bows to his master. His curiosity becomes a sexual attraction that is reciprocated.

As in The Escape, Agnes’s husband is a decent man and good provider who loves his sons and wife, albeit more out of neediness than selflessness. He is blind to her need for a separate identity. In a parallel subplot Louie is also unable to see how miserable his eldest son is working for his father as an auto mechanic (a manly job) when he wants to become a chef (a wimpy job).

Agnes is torn between her late blooming self-discovery and her Catholic guilt. When using her aunt’s broken foot as an excuse for her absences does not work, she hurries back from NYC and quickly makes dinner before anyone notices. But just why it has taken her so long to make the most of her free time is not explained. And when Agnes finally tells Robert about the puzzle contest, the talent aspect is obscured by the unfaithfulness as though a woman could not find satisfaction in something that is unrelated to a man.

If you are going to have your puzzle prodigy involved in her first affair, at least make it romantic and sexy. The lack of chemistry between this confident, needy inventor and the timid, self-deprecating housewife is anything but.

At one point you think this rather rambling story is going to develop into something unfamiliar when Robert starts to analyze Agnes’ passion for puzzles. ‘Your mind is going so fast you don’t know where you are so you focus on menial tasks,’ he hazards. ‘A puzzle is a menial task.’ Well, so is housework. Is that why Agnes did it for 20 years without wishing to be stimulated in The Big Apple?

More interesting is the unexplored concept of an autistic person’s need to order a chaotic world. With Agnes’ introverted, shy nature, her talent for maths (she does Louie’s business accounts) and her ability to focus for hours on putting little pieces together, she certainly could be an undiagnosed autistic genius. Perhaps her determination that her youngest son go to university has a personal significance. If Agnes had gone to university or not married young, could she, too, have travelled the world and created a money-making invention?

Rather than bravely taking off with Agnes’ journey, the film returns to the family over and again and gets bogged down in the selling of a lakeside house. It is as though scriptwriters Oren Moverman (who co-wrote the wonderful Bob Dylan biopic, I’m Not There) and Polly Mann do not want to burn any bridges. Turtletaub fails to introduce any tension or breathe life into this oddly emotionless film. His own mother’s life story might have inspired him to adapt this female-centric film, but it does not seem to be about any one real.