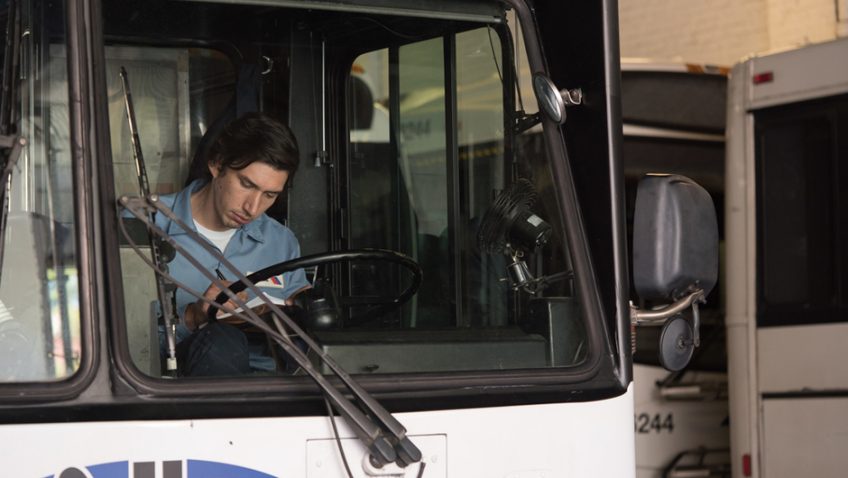 In its simplest and most deceptive form, Paterson

has us spending a week in the mundane yet magical life of Paterson (Adam Driver), a 30-something bus driver and aspiring poet. But Paterson, who significantly has no first name, was born in Paterson, New Jersey, a city associated with the world famous modernist poet and physician William Carlos Williams (d. 1963). Williams’ epic poem Paterson (1941-1958) was intended to do for that city what James Joyce had done for Dublin in Ulysses. ‘All that I am doing will go into it,’ Williams wrote, and he would travel the 10 miles from his home in Rutherford to Paterson. There, he would walk around; listen to conversations; see things through the city dwellers’ eyes, and transpose their daily lives into the poem. By following a bus driver through the city, soaking up its conversations and observing its inhabitants, writer/director Jim Jarmusch creates an endearing homage to Williams; a beautiful love story; and his own delightfully entertaining cinematic poetry.

Paterson lives in marital bliss with his creative, stay-at-home wife Laura (the stunning Golshifteh Farahani) and Paterson’s rival, an English bulldog named Marvin. Marvin growls when the couple kisses and Laura rushes over to the spoilt dog, cajoling him with an affectionate ‘my little man’. Laura believes in Paterson’s poetic talent and makes him promise to make a copy of his poetry notebook after reminding him in vain for a year. You just know that something will happen to make him regret not doing so and Jarmusch plays with this bit of suspense.

There are two things you can say for certain about Jarmusch (Only Lovers Left Alive, Ghost Dog: The Way of the Samurai, Down by Law). The first is that his body of work is so eclectic and his films so unpredictable, that you can never second guess what he will do next. The second is that it’s safe to say that he has never written a line of expository dialogue. So we are spared narration or phone calls telling us why this compatible couple do not have children, but when they wake-up on day one, Laura has a dream about twins. ‘One for each of us,’ Paterson smiles before kissing his wife good morning.

Later on in the film, the camera pauses for a beat on a pair of twins crossing the road, and in an utterly charming scene, Paterson subtly ‘child minds’ a girl of about twelve who is left alone, waiting for her mother and sister – who turns out to be a twin. The waiting girl is also a poet who, like Paterson writes her non-rhyming poems in a little notebook and shares Paterson’s taste for Emily Dickson. Paterson is struck by the simple beauty of the girl’s poem, Water Falls, inspired perhaps by the impressive falls of Paterson’s Passaic River that dominate the city. In the girl’s poem, however, ‘falls’ is a verb and the water is what ‘some people call rain’. Paterson might not be happy about paying for a harlequin guitar so that Laura can realise her dream to become a country-western singer, but when it arrives he concedes with some irony, ‘you are made for one another.’ Laura decorates the bungalow they share in black and white; makes her own black and white clothes and starts a thriving business making black and white cupcakes. Laura invites Paterson out to celebrate her unlikely financial success with the cupcakes by suggesting dinner and (you guessed it) a black and white horror film.

Jarmusch might venture over the line of charm into quirkiness in the character of Laura the enterprising, nurturing and practical one of the pair. Golshifteh Farahani is such a natural, however, that her idiosyncratic traits never feel artificial or contrived. Whether or not Jarmusch chose an Iranian actress for the role to reflect Paterson’s notable Muslim population, Laura is not only entirely westernised, but comes across as a real, three-dimensional person.

It is while the couple is enjoying a rare night out that tragedy strikes; but Jarmusch’s camera prepares us – if not the couple – for the inevitable. In a scene that is more magic realism than quirkiness, it is the kindness of a poetry-writing Japanese tourist (Masatoshi Nagase) that restores life to normal.

Driver (Inside Llewyn Davis, Tracks, Frances Ha) has a tough task acting dull without being so; reacting instead of being proactive, and listening rather than giving speeches. He spends half of the film jotting down intentionally non-poetic free verses about match book covers and the fourth dimension and making them sound like William Carlos Williams could have been writing them. But Driver is a revelation in what might be his most memorable performance. His ambiguous smiles at his wife’s disarming announcements; his disappointment, so reticently expressed when she serves a pie of cheddar and Brussels sprouts; and his quiet devastation when his chance of fame is destroyed are all those small moments that an actor cannot fake.

Perhaps the moral of the story is that nothing is really ordinary in this ordinary East Coast American town, or in anyone’s lives. And if you get that, you might agree that Jarmusch, like William Carlos Williams before him, has found a way to turn that concept into a truly moving work of art.