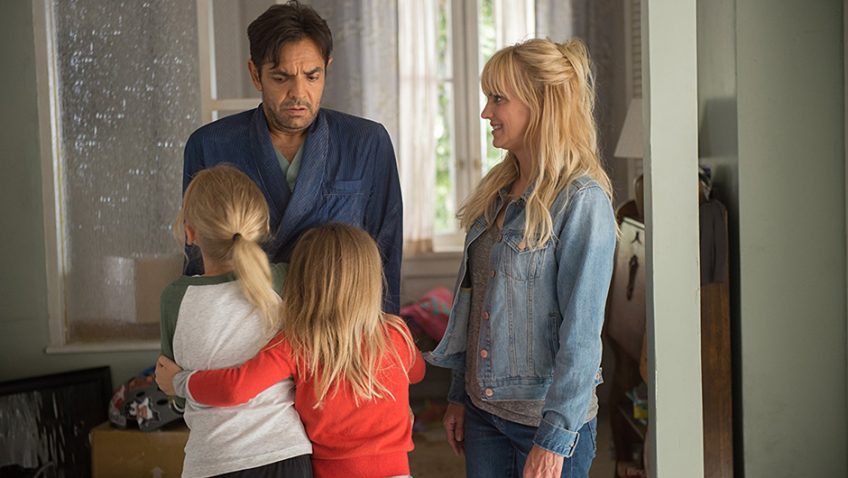 This gender-reversal remake sinks under its own heavy hand

Director/co-writer Rob Greenberg’s Overboard is a gender-reversal remake of Garry Marshall’s 1987 screwball romcom, which barely broke even at the box office and fared worse with the critics. There are only two plausible reasons to remake Marshall’s banal, sexist comedy: to elicit laughs and comeuppance from the gender reversal and to better the two stars of the original. For if Overboard is anything, it’s a vehicle for the comic talent and talent of its two stars. But who alive and under age 60 can top the combination of Goldie Hawn and Kurt Russell – real life partners since 1983? 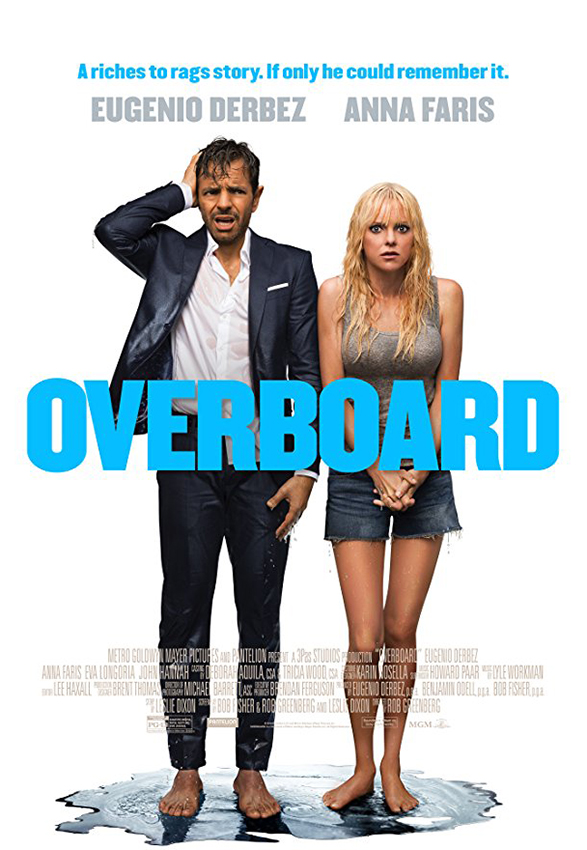 Certainly not Eugenio Derbez and Anna Faris (The Dictator; The House Bunny; I Give it a Year) although Faris is well cast and, to her credit, attempts to emulate Hawn without losing her own natural comic persona.

In the original, Faris’ character (the names are changed) is the wealthy, obnoxious heiress and Derbez’s character is a widower with four sons. He is a carpenter who is hired by the heiress for some carpentry work. In this version, Kate (Faris), a mother of three daughters, works two jobs while studying for her nursing exam. One of the jobs puts her on playboy Leonardo’s (Derbez) huge yacht to clean his carpets. We’ve already seen Leonardo in the jacuzzi with his model girlfriends (cliché after cliché) and we’ve also met his family: his dying father and his two sisters, one of whom (Cecilia Suárez), Magdalena, is plotting to take over their father’s business. Leonardo’s yacht was a birthday present from his father who cannot accept that his son would prefer leading a wasteful decadent lifestyle on the yacht to making money as head of a business empire.

As in the original, the playboy Leonardo refuses to pay Kate who is sacked by her company and made to pay for the carpet cleaning machine that Leonardo dumps in the sea, along with its cleaner. The film does, of course, have a moral message that is none too subtle as Leonardo gets a taste of his own medicine.

When, in a drunken stupor, Leonardo falls overboard and wakes up in hospital with amnesia, Magdalena (in the original it’s the heiress’s husband) pretends not to recognise her brother, who remains a John Doe. Kate’s best friend (an underused Eva Longoria), is the one who comes up with the brilliant idea of teaching the revolting, thoughtless playboy a lesson while enacting revenge for his cruelty. 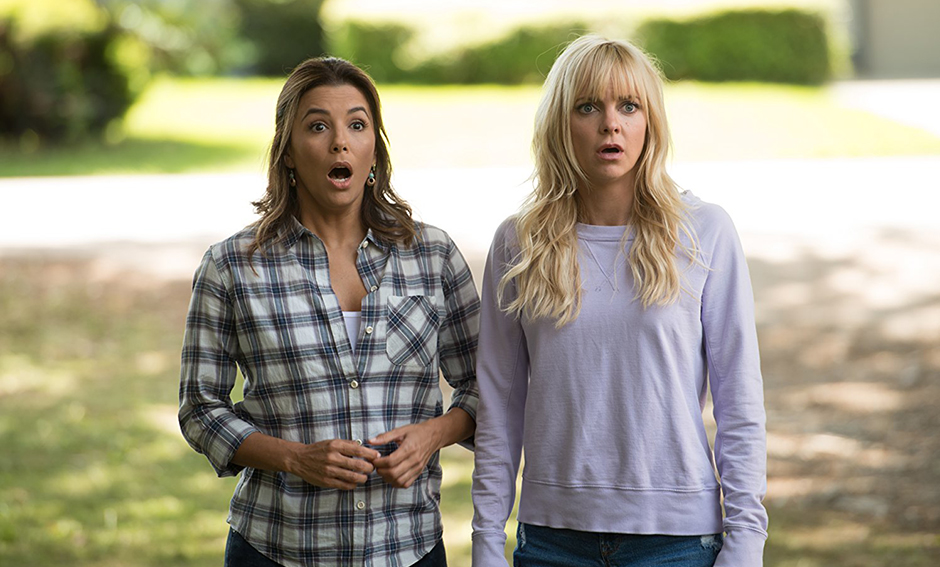 Kate, using conveniently forged papers, claims the John Doe as her husband and the hospital is only too happy to be rid of the demanding patient. Kate tells Leonardo that he is a construction worker, and father (but not biologically) of her three daughters. Once home, Leonardo is ordered to cook, work in construction for a pay cheque, clean the house, and (although here Kate is wary) take care of the girls while Kate studies.

At first Leonardo is indignant, exhausted, and complaining. He is the fish out of water – a well-used comic device that here pays few dividends. Even if you haven’t seen the original you’ll know that this situation does not last.

And here’s where the gender reversal gimmick starts to fall apart. First because we’ve come a long way from finding such reversals unusual; second because Leonardo changes too quickly to be credible; and third, because Kate (you can’t help thinking of Kiss Me Kate) ends up falling in love with this jerk. 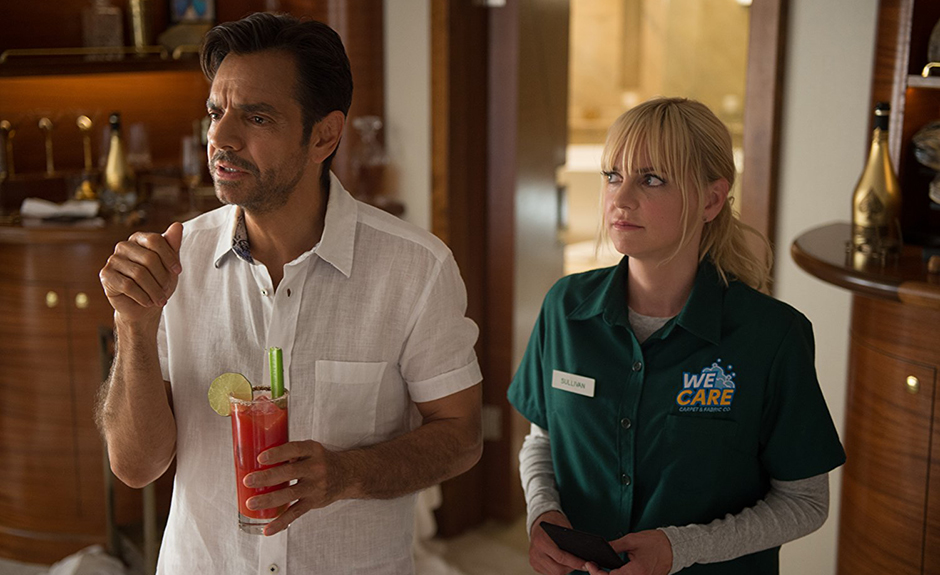 Derbez is one of the most famous Hispanic celebrities in the world and his 2013 film, Instructions Not Included (which was made for $5 million and returned $100 million) turned him into Mexico’s most bankable director/actors. But here, his shortcomings and miscasting are blatant. It is not just the 15-year age difference, but Derbez’s laboured, unconvincing acting and the fatal absence of chemistry between the two leads. You cannot shake the image of Derbez as the ageing lothario from the yacht scenes, although even these are hard to swallow. We are supposed to be willing the two leads to get together, but you might well find yourself hoping that Kate meets a nice doctor instead.

The ending is identical to the original, except that here it is dragged out by a completely superfluous flurry of feel good scenes to the extent that it loses any semblance of romance.

Greenberg is a prolific and successful TV writer/director/producer, but his feature film script, Meet Dave, which he co-wrote, was as bad as this screenplay (which was co-written with Bob Fisher – who wrote We’re the Millers and Wedding Crashers. Both of those films had a few laughs, but Overboard is too predictable for humour. Wearing both hats with Overboard, Greenberg cannot blame the director, or the writer, but he can possibly point to the undue influence of co-producer Eugenio Derbez.