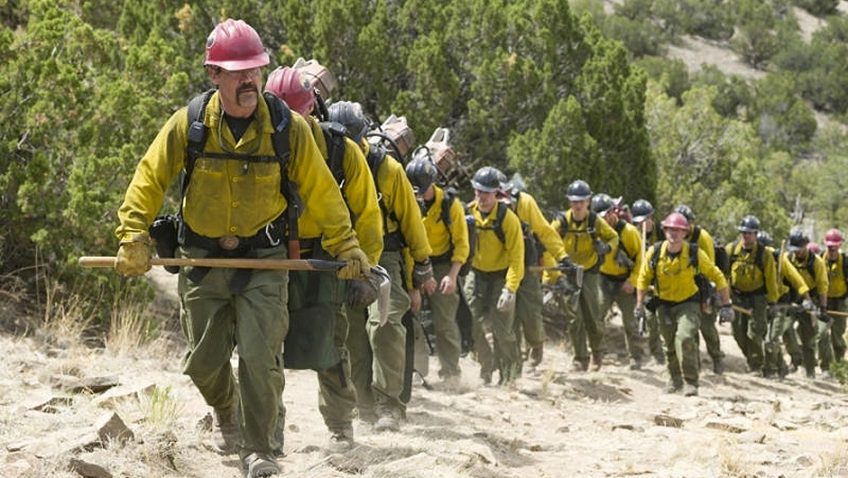 When you ask little boys what they want to be when they grow up, many still say ‘a fireman’ – more for the bright red engines, the poles to slide down, the uniforms and the heroism than for the reality of coming face to face with a burning building. Or, if you happen to be a ‘Hot Shot’ in the American West, coming face to face with a burning mountain side. Only the Brave is unlikely to inspire many recruits. It presents an unadorned real-life version of the Granite Mountain Hotshots: very human men who ultimately face a superhuman task. If it inspires you to buy a ticket, do not read anything about this true story in advance. The slow, clichéd and to some extent predictable build up might put off the less patient cinema goers, but there is a reward for those who do not expect instant gratification. Director Joseph Kosinski is known for his computer graphics-driven Sci-fi fantasy films, such as Tron: Legacy and Oblivion so it is surprising that the ordinary problems and family lives of the fire fighters share screen time with the training sessions, drudgery and then nail-biting danger of their work.

If this is a film about men facing death and the difficulty of living with those men (there are no women in the Granite Hot Shots and being married to one is not easy), it is also a film about contrasts. The cast is a mixture of A-level and lesser known actors playing men of contrasting personalities. Josh Brolin is no-nonsense, 40-something fire chief Eric Marsh, a man who knows he cannot afford mistakes and seldom makes them; and Brendan McDonough (Miles Teller), a young aimless local whose life is one big mistake.

McDonough is thrown out of a bar, drug addicted, drunk and unruly. He later confesses to Marsh that he has a criminal record for car theft. When McDonough reaches rock bottom he turns to Marsh, whom he respects, to give him purpose and dignity. Marsh takes a chance, perhaps recognising some of himself in the young man. In a clichéd scene, an out-of-shape McDonough struggles to keep up with the physical training, but refuses to quit, taking a selfie at the top of the mountain to prove to Marsh, no quitter himself as we see, that he did not cut corners. Miles Teller in Only the Brave

The impetus behind McDonough’s decision is his discovery that he is to be a father and the girl does not want him to be any part of his daughter’s life. This is a close-knit community based around the family and something in McDonough responds to the helpless baby he sees in the hospital. He wants to be worthy of her. In contrast to McDonough, Marsh has a strong marriage of equals with self-employed Amanda (Jennifer Connelly), but stubbornly refuses to have children.

Amanda is the only fleshed-out woman in the film, but is given time to be more than the one-dimensional woman-behind-the-man played by Andie MacDowell. When Marsh does not contact Amanda, later telling her he not wish to worry her, she retaliates by doing the same when she involved in a car accident. Refusing to contact Marsh, she keeps her appointment consulting a group of horse owners as Marsh returns to see the car that has been totalled.

We never learn why Marsh is so dead set against children, but must believe it is the risk and the time spent away from home. The better Brendan does in his job, the more access he is given to his daughter and the more responsible he becomes. When, under pressure from his girlfriend and family, Brendan asks Marsh if he would nominate him for an administrative job, Marsh reacts hastily and angrily, warning the younger man that he is not made for a desk job, and at the same time, insinuating that he is betraying the team. Taylor Kitsch in Only the Brave

The main contrast in the film, however, is between the flawed men and their mundane problems that appear in the film as the clichés, and the heroes these men become when they are out in the elements facing a fire. It is only in enabling us to know these very mortal men, husbands, sons and fathers that the fire fighting scenes become so affecting. While most of the crew are merely sketched in, in addition to Marsh and McDonough, we get to know Marsh’s deputy Jesse Steed (James Badge Dale) and the quick tempered, bully Chris MacKenzie (Taylor Kitsch) who evolves during the course of the film.

Fighting a forest fire is much different from urban fire fighting. A plane drops water over an area to buy time or put out the worst of the fire, but the actual fire fighters on the ground cannot use water. Instead they starve the fire of fuel by clearing trees and actually feeding fire with fire by setting a line alight. A fire line is no more or less effective than a trench in war.

Marsh, Steed and the men of the Prescott Arizona Wildland Fire Team have been working on the backline far from the fire; forced to take orders from Hot Shot teams with lesser local knowledge. Marsh is frustrated by this and presses for certification.

A bit too much time perhaps is devoted to the certification process by which the local fire fighters become Hot Shots. Marsh draws on the help of Duane Steinbrink (Jeff Bridges) who puts in a word with the mayor, and before long the team gets an evaluation. Marsh fears he has blown the evaluation when he contradicts the evaluator’s advice and (correctly as it turns out) follows his own strategy. This is typical of Marsh; it is what makes him such a popular leader and so good at his job.

Viewers who feel a slow burning tension mounting in the first three-quarters of the film will be rewarded in the final third. In almost documentary fashion, we accompany the crew to the scene of a fire on Yarnell Hill, Arizona in June, 2013.