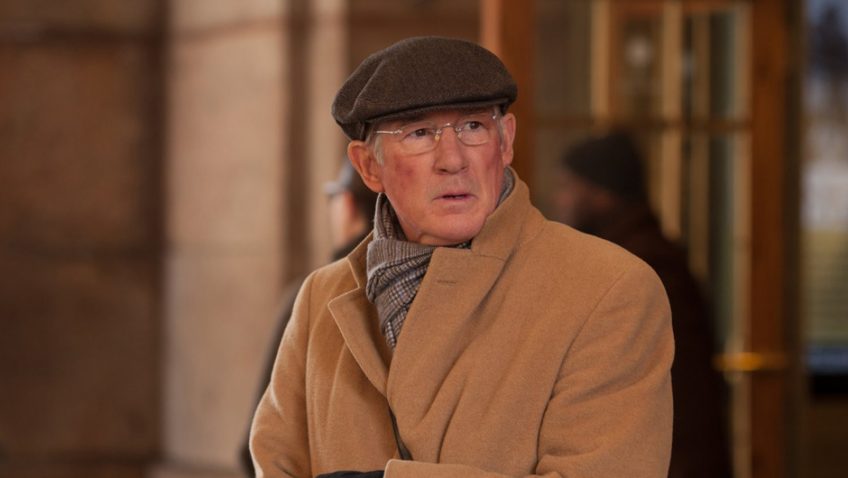 Richard Gere excels in this stylish, unusual film about a Jewish fixer

Older actors who want to continue working need to reinvent themselves just like the rest of the population. Actors, however, might have to abandon the public image that they spent the first half of their career cultivating. Such is the case of Richard Gere (The Runaway Bride, Pretty Woman, An Officer and a Gentleman), who may have played his last romantic man role in the Second Best Exotic Marigold Hotel. Since then he has appeared in the low-budget The Benefactor, playing an overbearingly guilt-ridden, drug-addicted philanthropist and Time out of Mind, a neo-realistic portrait of a homeless person. While Liam Neeson famously metamorphosed into an action hero with Taken at age 55, Gere, at 65, began stripping away all semblance of the romantic hero from his persona. Now, the Academy Award nominated Israeli writer/director Joseph Cedar (Footnote) has given the 67-year-old actor what is arguably his greatest role yet in Norman: The Moderate Rise and tragic Fall of a New York Fixer. 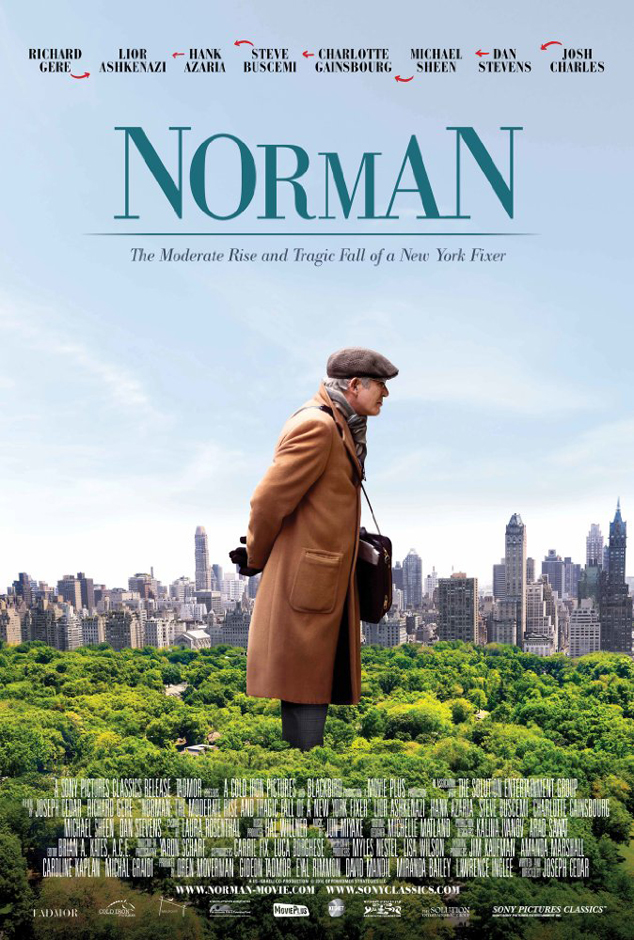 Norman Oppenheimer (Gere) wanders around New York City with a shabby briefcase pretending that he has somewhere to go. With his camel-hair overcoat that has seen better days, hat and ear mitts, he looks more like a dignified tramp than a salesman, an impression borne out by the fact that he does not appear to have a home. But Norman believes he has something to sell. One of the most unconnected men in New York claims he can put high-powered people together in mutually beneficial deals. Since his address book is slim for a fixer, he commonly mentions that his daughter has worked for X, or his wife played Bridge with the wife of Y. We see no evidence that Norman has, or ever had, a wife or daughter.

The long title may seem like a nod to fellow Jewish writer/director director Ulu Grosbard’s Who Is Harry Kellerman and Why Is He Saying Those Terrible Things About Me? – another (though inferior) film about a depressed fantasist driven to extreme measures by attacks on his character. But few people who have seen Shakespeare’s The Merchant of Venice can ignore Norman’s link to Shylock, the outcast Jew who is a scorned banker (a type of fixer) to Venice’s merchants and aristocracy. Far fewer however, will have heard of Norman Oppenheimer’s (Gere) namesake: Joseph Süss Oppenheimer, the 18th century German banker to the Duke Karl Alexander of Württemberg who may have committed suicide after refusing to convert to Christianity.

The crux of the increasingly complex plot is Norman’s meeting with Micha Eshel (the wonderful Israeli Actor Lior Ashkenazi, who looks like a cross between the late Jerry Orbach and an older Oscar Isaac). Lior is in NYC for trade talks on energy regulation, as the Deputy Minister for Trade and Labour. Norman follows Eshel as he window shops (rather surprisingly, without a body guard) to let off steam.

Eshel is at a low point in his career, frustrated with being second fiddle to his boss, the Minister. After buying a bag of sweets, Eshel stops in front of a designer shop window in need of retail therapy. Norman approaches and, awkwardly, they begin to chat.

Norman follows Eshel into the shop where the thrifty Deputy Minister tries on a suit and shoes. After seeing the price tag on the suit he reluctantly rejects it. ‘At least let me get you the shoes,’ Norman insists, never imagining that the unaffordable $1,000 plus purchase would be both the best and worst investment of his life.

In the short term the shoes earn Norman Eshel’s private business card. Wasting no time, Norman engineers a precarious invitation for Eshel and he to attend a private dinner party at the home of millionaire business mogul Arthur Taub (Josh Charles). The result is a humiliating disaster as Eshel fails to show, warned by his boss to ‘stay away from the Normans.’ 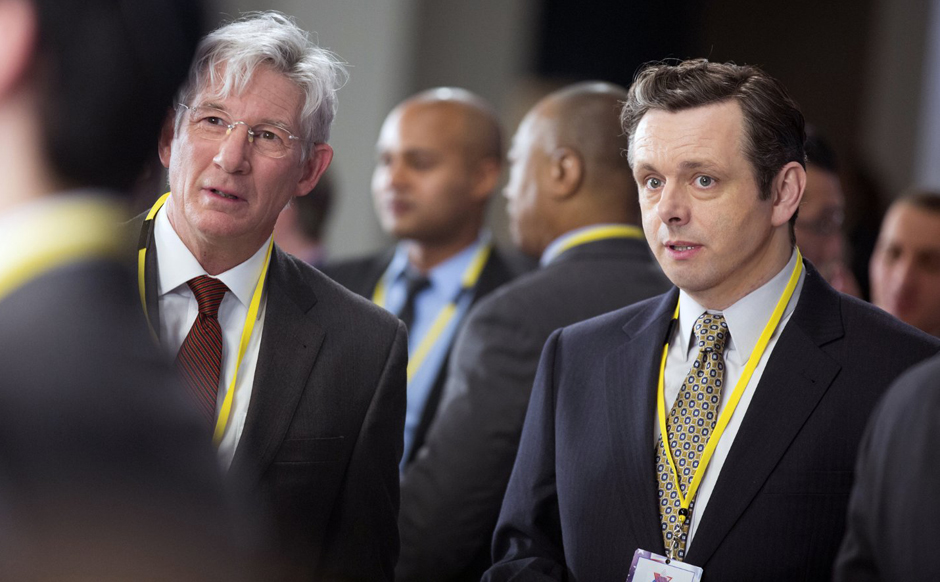 Three years later, Norman’s investment pays off when Eshel not only returns to NYC as Prime Minister of Israel, but, at a reception, remembers and publicly greets his old friend. What’s more, Eshel gives Norman the honorary job of his Personal Ambassador to New York Jewry, a position he cannot help but publicise to a stranger on a train. Attractive, with long, brown, curly hair, Alex Green (Charlotte Gainsbourg) flatters Norman by showing an interest in him and his work. Norman then learns that Alex is a lawyer in the New York Israeli Embassy.

As Norman leverages his connection to put together a series of inter-related ‘fixes’, all of which must coalesce simultaneously, an external political variable throws a spanner in the works. The opposition has accused Eshel of corruption and it seems that the whole world is suddenly interested in the man who bribed him with a pair of shoes…

As in The Benefactor and Time Out of Mind, Gere excels as a man who is harder to like than to feel sorry for, only here Gere has to really work to make his character sympathetic, complex and interesting. Norman wants to matter in the world and it’s clear it is not about the finders’ fee. Cedar leaves us to make up our own mind about Norman’s tactics and mental health. What is clear is that Norman is aware that no one will talk to him if he does not have something extrinsic to himself to offer them. He is as desperate for these connections as he is shameless in his means of procuring them.

Cedar’s stylised and refreshingly original film does have some shortfalls. The ending lacks the magnitude and the sense of tragedy needed at this point in the film, and not just because of Joseph Süss and Shylock. Another problem is that Cedar leaves us with too many unknowns. We do not always know what Norman is imagining and what has actually happened, or what Norman does in between the captions indicating a passage of time. Has he actually been carrying on with his deal making, or are the deals we know about – involving his nephew (Michael Sheen); his Rabbi (Steve Busemi) and a ruthless mogul (Harris Yulin) and his callous protégée (Dan Stevens) the extent of his activity?

We’ll see how well Richard Gere has connected at Awards Time where his performance might fix a few nominations.