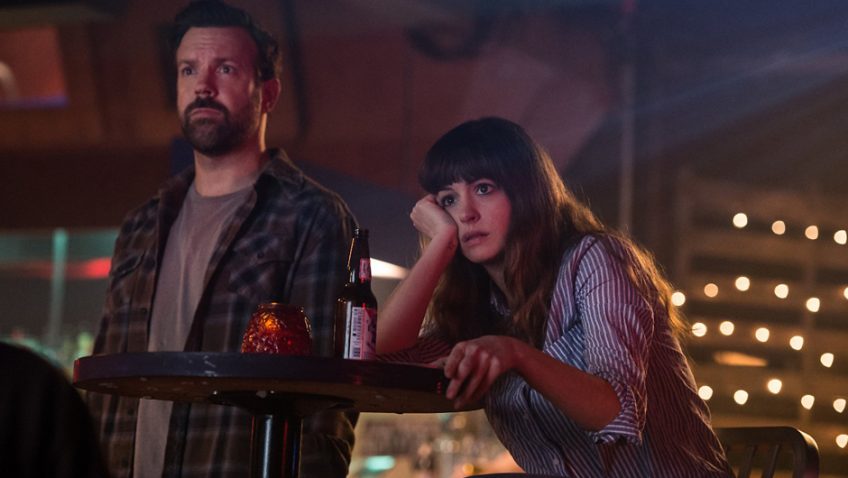 Colossal should be a mess: a dog’s dinner of genres; of indigestible tones and jarring casting. Yet in Colossal, Spanish writer/director Nacho Vigalondo has created something not only coherent, but fresh, entertaining, topical and thought-provoking.

Just be prepared for a weird prologue that doesn’t belong in a Hathaway movie or anything co-starring romantic comedy comedian Jason Sudeikis. You might think you’ve walked into the wrong multiplex, but a ‘twenty-five years later’ caption reassures us – though only momentarily.
For if you can only picture Anne Hathaway as the emaciated, nearly bald prostitute in Les Misérables; as a Prêt-à-Porter-type business woman in The Intern, or as the White Queen in Alice through the Looking Glass, be prepared for another surprise. Yes, it’s Hathaway, and not The Girl on a Train’s Emily Blunt, playing Gloria, a thirty-something alcoholic with a thick, mane of hair and a few extra pounds reflecting an unhealthy lifestyle. 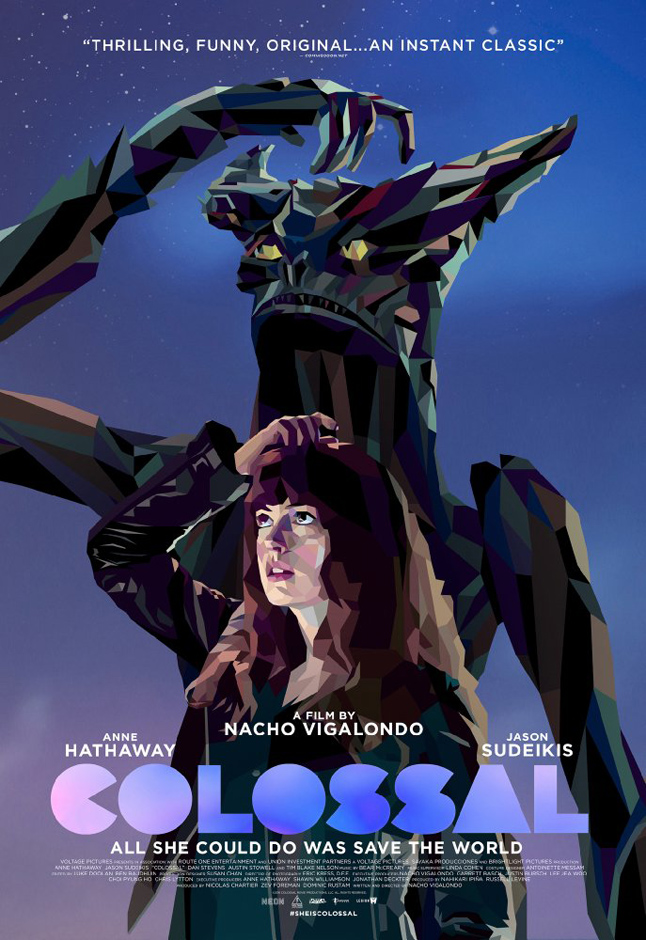 When we first meet Gloria, the unemployed magazine writer is being kicked out of her flat by her trendy, handsome boyfriend, Tim (Dan Stevens) who is sick of her blackouts and lies. Either Gloria has no friends to stay with or she needs to be alone and re-evaluate her life, because Gloria returns to the small town in which she grew up. She camps out in her parents’ fully functioning gothic mansion that has not been sold, rented out or squatted in (the film’s first possible false note).

Things start to look up when Gloria is recognised by Oscar (Sudeikis, We’re the Millers, Horrible Bosses, The Bounty Hunter) an easy-going, friendly former classmate from elementary school who is (now) single. What is immediately apparent is that Oscar was, and still is, in love with Gloria whom he remembers vividly. The same cannot be said for Gloria who seems to have completely blotted out his memory. Or has she?

Oscar gives Gloria some furniture, including a huge television, and offers her a waitress job in the struggling bar that he inherited from his father. Gloria discovers a wonderful, boarded-up room decorated with murals of Western scenes and insists Oscar reopen it. He also introduces Gloria to short-fused, heavy-drinking Garth, (Tim Blake Nelson, Syriana) who hangs out with a handsome, polite, younger man named Joel (Austin Stowell, Bridge of Spies). Gloria quips, ‘Why do they always do that? Introduce me to everyone, but the good looking guys?’

While the job gives Gloria a place to go and a limited social life, it’s a throwback to the drinking life that damaged her career and relationship in New York City. Tim was controlling, but Oscar is becoming a controlling alcoholic with a bullying streak. 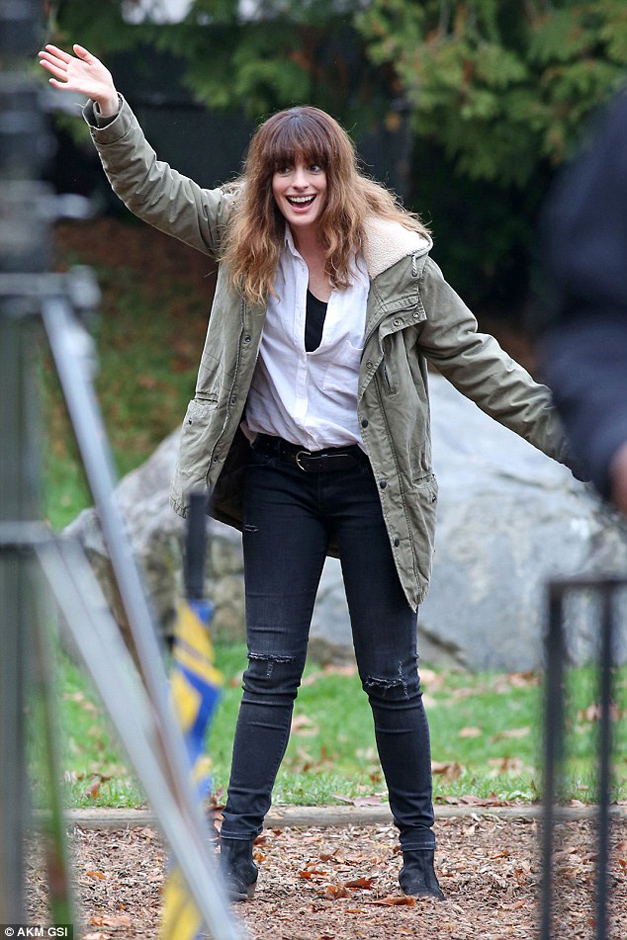 Anne Hathaway and in Colossal

Within a short time a phenomenon occurs to change everything. The bar becomes packed with customers who flock to the Western room to watch the big news story from across the globe. An enormous creature, straight out of a Japanese Kaiju monster movie appears in Seoul, and the residents are both paralyzed with fear and entertained. But even more astonishing for Gloria is her discovery that every move she makes in her former elementary school playground is mimicked across the world by the monster in Seoul.

When a second, giant robot-creature appears to confront the original monster enthralled tourists flock to Seoul to see how this astonishing battle will turn out.

Vigalondo’s film starts out like a horror film, turns into a romantic comedy, and then becomes a Kaiju movie before showing signs of a drama about a self-destructive relationship (darker than The Days of Wine and Roses). There’s even a coming-of-age story about childhood bullying with echoes of A Monster Calls. But it all blends together in a wacky and gripping way and ends on just the right note. According to the director, who never hoped to have two A-list American stars in his film, what convinced Hathaway to do the movie was this final gesture in the script. Her perfect interpretation of this gesture shows that she and Vigalondo were on the same wave length, something that is obvious from the start.

The film is oddly topical, too. As the initially puzzling title suggests, it is about the consequences of our actions, however inconsequential they may seem, in both time and space. A childhood act becomes stuck in the subconscious of the adult while an act in a small American town has deadly consequences in Asia. Vigalondo goes further, looking afresh at the nature of villainy, self-destruction and destruction.

Here in the UK, the film by Vigalondo that you might have seen is his most recent, Open Windows (like Colossal, an English language film). The consensus on film website Rotten Tomatoes is as follows: ‘Open Windows is undeniably ambitious; unfortunately, director Nacho Vigalondo’s reach far exceeds his grasp.’ Not so with Colossal, which should lead the 40-year-old auteur to the Hollywood A-list: a mixed blessing for filmmakers with original stories that defy categorisation.