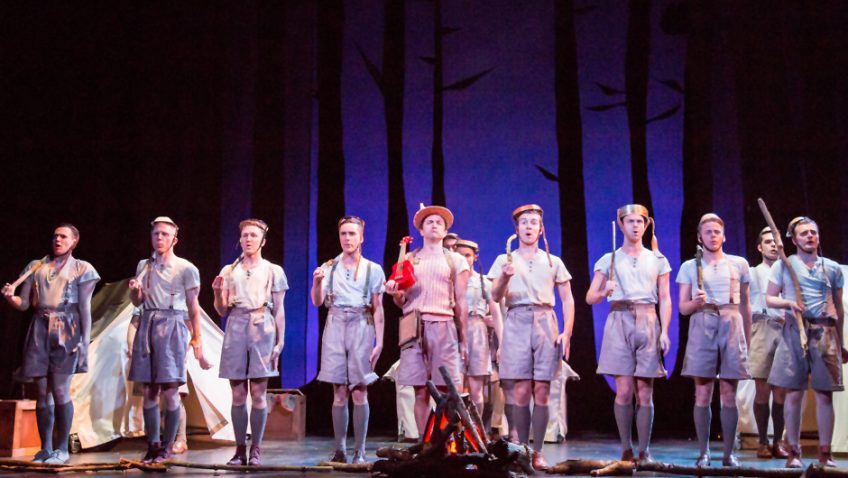 The Mikado is given an all-male camping trip

Gilbert & Sullivan’s The Mikado had its premiere in 1885 when things Japanese were all the rage in England. It ran for 672 performances, but the only Japanese thing about it was the settings and fabrics. Gilbert had been inspired by the Japanese Village Exhibition in Knightsbridge.

The satire is directed against British targets though nobody will be surprised to learn that the Japanese were offended and that the opera was banned during a royal visit to Britain by Crown Prince Fushimi in 1907. David Mckechnie in The Mikado

The main target is bureaucracy and the perjury, bribery, lies and salary that go along with it.
Pooh-Bah has accepted all the great offices of State and runs the treasury, law, army, navy, church. He is also mayor and groom of the back stairs. Economical with the truth, he can always be relied on to pass on state secrets for a fee. Now who does that remind you of?

The Mikado has been performed more times than any other Gilbert and Sullivan opera. There has been a Jazz Mikado, a Swing Mikado, a Hot Mikado, a Black Mikado, a Cool Mikado, a Catalonian Mikado and a Metropolitan Mikado.

The worst Mikado I ever saw was a cricket version. One of the most enjoyable was Jonathan Miller’s 1920s version for English National Opera at London Coliseum

Now we have Sasha Regan’s all-male touring production. Regan has already carved a niche for herself with her all-male productions of Iolanthe, The Pirates of Penzance and HMS Pinafore.

There is nothing original about all-male productions of G&S. The British publish schools used to do them all the time.

It’s a pity that Regan has felt the need to justify an all-male casting and has set the opera during a 1950’s school camping trip. This means everybody is in short trousers and this does not do the opera any favours at all. The baggy short trousers are extremely ugly.

The Mikado has been turned into one boy’s dream, as camp as the row of three tents, in which the boys and the masters play all the roles.

David McKechnie as KoKo, the Lord High Executioner, and Alex Weatherhill as Katisha come out best; and especially when they are singing “Titwillow” and “There is Beauty in the Bellow of the Blast.”

The high spot is the falsetto singing and comedy of Alan Richardson as Yum-Yum.