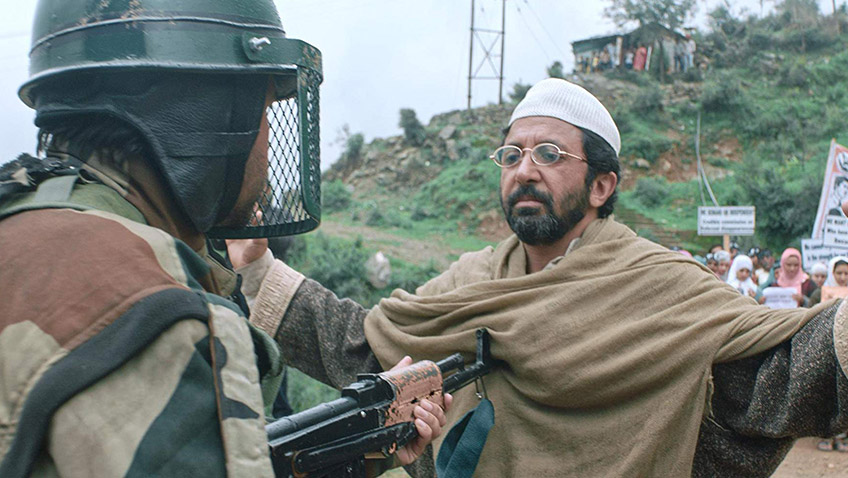 A dramatic, human story behind the headlines on Kashmir

For the past 72 years, since the British left India in 1947, and the ruler of Kashmir could not decide whether to go with Pakistan or India, Kashmir has been an unresolved issue, claimed by Pakistan, India, and even China, in an uneasy truce. Prime Minister Narendra Modi’s conservative BJP party has never accepted Pakistan’s claim to the region and considered the anonymous status (given by article 370) to have been no more than temporary. A caption tells us that since 1947 100,000 Kashmiris have been killed in conflict. Another caption explains the title: some 10,000 men have disappeared, leaving widows and half-orphans behind. 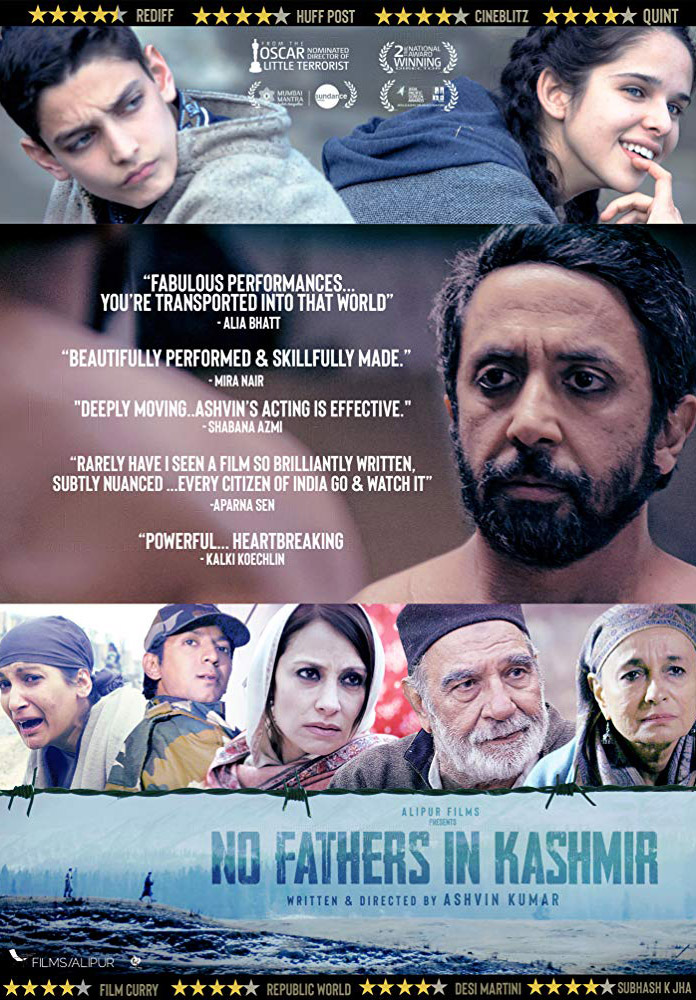 Ashvin Kumar is a man marked by borders. He dropped out of film school in London because of borders: the structure and teaching confined him. His Academy Award nominated short film, Little Terrorist, is about the fate of a ten-year-old Muslim boy who crosses the Pakistan/Indian border to retrieve a cricket ball.

No Fathers in Kashmir is also about that border. It offers a revealing look at what has been going on inside Kashmir long before Modi’s recent crackdown, as seen through the eyes of two fatherless teenagers. Noor (Zara La Peta Webb), 16, is Kashmiri born but we when we first meet her, she is with her boyfriend in Birmingham where she has lived since her father, Basheer, was ‘picked up’ by the Indian authorities. He has not been heard from since. Noor’s mother Zainab (Natasha Mago) has brought Noor to a village in Indian-controlled Kashmir to meet her paternal grandparents, but there is another reason for the visit; one which causes tension in the family.

Zainab and Noor have travelled to Kashmir with Zainab’s fiancée, a homely, conservative and boring suit named Wahid (Sushil Dahiya), an employee of the Indian Foreign Service in London. They cannot marry until Basheer’s father, Abdul (Kulbhushan Kharbanda), co-signs the death warrant. We are clearly not supposed to like Wahib, and in time, his true character is revealed.

Up until this point, the film is unengaging and somewhat confusing as the issue of the death certificate is not yet clear. But when Noor meets Arshid (Ashvin Kumar), Basheer’s former friend, who now runs the village madrasa; and Majid (Shivam Raina), the son of another friend who disappeared with Basheer, No Fathers in Kashmir picks up. It becomes a tense and intriguing adventure of discovery, redemption and, with a minimal dose of sentimentality, reconciliation. 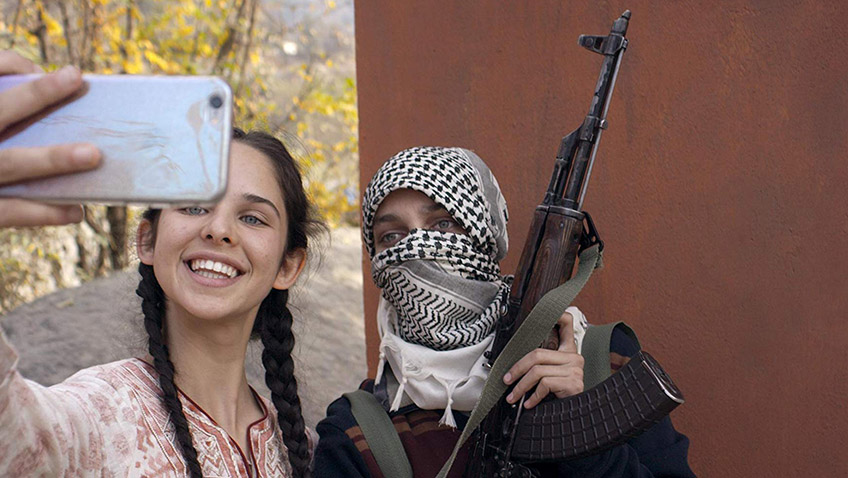 Kumar’s dislike of borders extends to his casting, if you think of professional, trained and experienced in one zone and first timers in another. Here there is a mixture, and while both the impressive young protagonists are first timers, the complex, pivotal, and more controversial character of Arshid is played by the writer-director himself.

If the children go on a voyage of discovery, Arshid is the character whose arc is most fully developed. Kumar is addressing his film not just at the youth of India, Pakistan and the world, but at older, more entrenched audiences. Early on Arshid is critical of Zainab westernisation and Noor’s dress and conduct. “If you taught children the correct Islam, we wouldn’t be slaves to Indian for 70 years,” he rants.

We learn that Arshid, too, was tortured by the army, but he was not ‘disappeared’ with Noor and Majib’s fathers. “They were fighting for Kashmir. I was fighting for Islam. I would have given my life for them, but they were not men of faith. It was obvious who had to stay alive,” he announces. Arshid is thus portrayed as not only unlikeable, dogmatic and fanatical, but also self-serving. It appears that, for reasons that are not clear – at least not to the audience at my screening – Arshid is hiding a wounded militant and at the same time accepting bribes from the Indian army.

And yet Arshid gradually reveals another side to his character. It has been buried, perhaps by grief and guilt, and unearthed by Noor’s search and the chance to intervene so that that Majib does not end up like his father. We sense, even through his hardened stance, that Arshid is a man in search of redemption, so his actions toward the end of the film are not surprising but help complete his character arc.

Noor is more British than Indian, questioning, demanding, continually snapping pictures on her phone, and far less cautious than Majib, who is not protected by a British passport or Wahid’s position. Majib has lived his whole life in the village, fatherless, and with few prospects, but they are united by the cruel loss of their fathers, the desire to know the truth, and a growing physical attraction. The fact that the two friends converse in English, is, I am assured by the director, not dramatic licence. Even in remote Kashmiri villages, children are taught English. 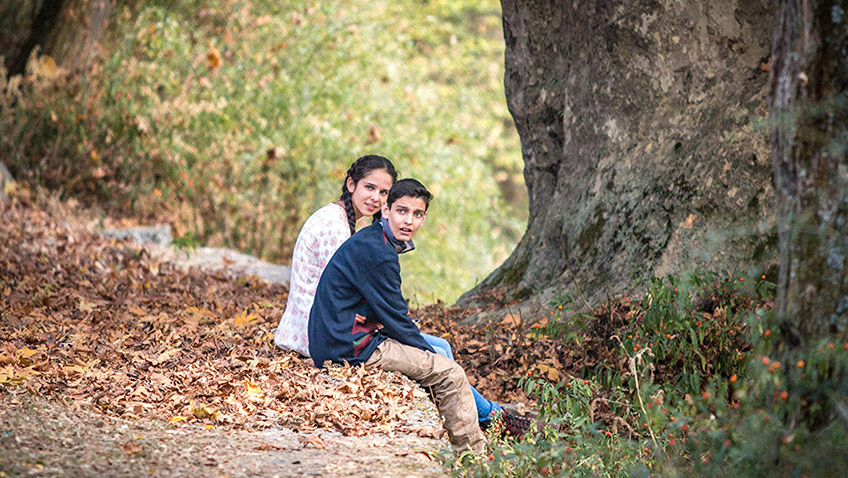 When Majib tells Noor that their fathers were last seen in the forest of Sarwan in the mountains near the Pakistan-Indian border, Noor implores Majib to accompany her there on his scooter. Opposing Majib’s better judgement, Noor wants to extend the search which has, as you would expect, turned up nothing. The two are trapped by nightfall and spend the night together, platonically, but for a significant kiss.

What follows, including Noor’s gruesome discovery, may strike some viewers as contrived, but the aftermath certainly is more credible. Moreover, the events in the mountains give the film the dramatic force it needs to link past with present, and highlight the theme of photography as remembrance, truth and history.

Earlier Abdul tells Noor, “We wipe out the history of our country with our own hands’, explaining that if the Indian army were to find photos of the disappeared, the family would be arrested. There is unsubtle foreshadowing in this statement, but it explains why a girl brought up without photos of her father hangs on to the truth recorded in her phone, even when their destruction could secure Majib’s freedom.

It is wise Abdul, whose only son was taken from him, who makes sense of the paradoxes that we see when equating Noor’s action with Arshid’s vis-à-vis saving Basheer. Abdul tells Noor: ‘They tortured his parents. Look at him. He’s trying to find some meaning from his life. We can’t know why people do what they do. We weren’t there.’

In putting us there, Kumar helps shed light on the human side of the recent headlines with compassion and conviction.