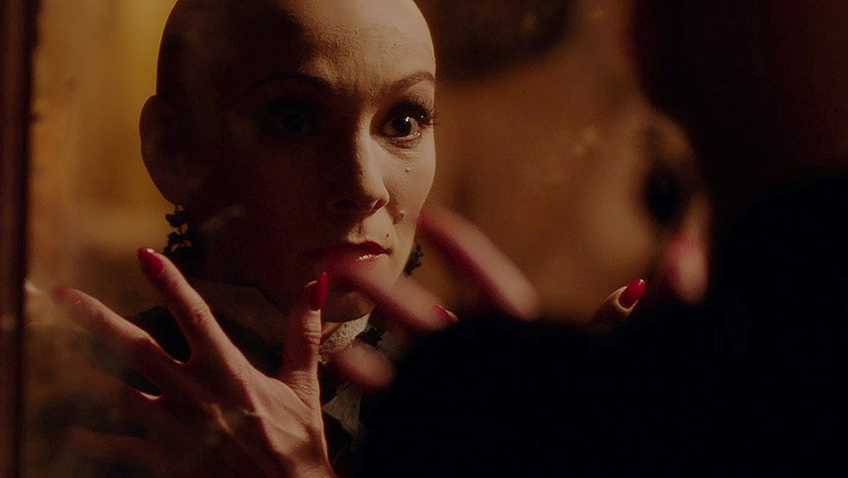 In Powell and Pressburger’s 1948 film The Red Shoes, when forced to choose between her career and love, the heroine falls in front of a train wearing her red ballet shoes. In Peter Strickland’s highly stylised and brilliantly shot fourth feature, In Fabric

, there is significantly less free will involved for the hapless bank clerk and washing machine repairman who happen to grapple with a stylish red dress. 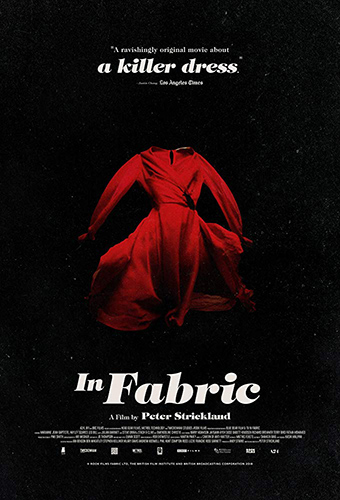 Strickland’s compellingly visual, dark films have been set in a kind of timeless world in Eastern Europe (The Duke of Burgundy, 2014; Katalin Varga, 2009) or Italy (Berberian Sound Studio, 2012), but Dently & Soper’s department store on the High Street of Thames-Valley-on-Thames is set in the UK and is pitch black – with an equally dark sense of humour.

Strickland brightens things up physically and metaphorically with an ‘Artery Red’ dress and a close up of Miss Luckmoore’s (Strickland regular Fatma Mohamed) long, red fingernails as she opens the box containing this dress. This creepy sales lady is not just unpacking a new item. She is opening a Pandora’s Box.

Divorced mother of one Sheila Woolchapel (Marianne Jean-Baptiste) lives in Thames- Valley-on-Thames with her artistic, teenage son Vince (Jaygann Ayeh) whose older girlfriend and model, Gwen (Gwendoline Christie) has moved in without Sheila’s permission. Gwen has a sense of entitlement that starts to make Sheila feel like a stranger in her own home, and Vince sides with his domineering girlfriend.

Sheila hopes to find some respite and enjoyment through her ad in the local lonely hearts column. The sharp-eyed viewer will note that, on the adjacent page is an advertisement for a dress that looks like the one Sheila purchases when she receives a reply from Adonis Jackson (Anthony Adjekum). Sheila decides to buy a new dress for the new date. In the opening credits, we heard the buzz of a crowd and saw a montage of shoppers and lurid images advertising the Dently & Soper sale, including a group of witch-like saleswomen in heavy, black vintage dresses who are beckoning the crowds to enter their lair and buy.

In one of the best parodies of blind dating you will see this year, the new dress goes unnoticed. Physically, Adonis does not live up to his name. Despite his claim to love dancing (he has a sprained ankle) and laughing, he is morose, grumpy, and rude. Sheila spends the date struggling to make conversation with the back of the menu.

The date might be over, but not the nightmare. As Sheila starts to remove the dress, she notices a red rash on her chest and when she washes it, the washing machine explodes (there is no point in wondering why Sheila would machine wash a chiffon dress). Things start to look up when Zach (Barry Adamson), a charming, intelligent and considerate suitor answers her advertisement and the two hit it off. When Zach and Sheila, who has put on the dress after lovemaking, go for a walk in the park, she is attacked by a dog. Sheila is seriously bruised, but the dress is intact. At this point Sheila tries, in vain, to return it –even without a refund – and finally, gives it away. 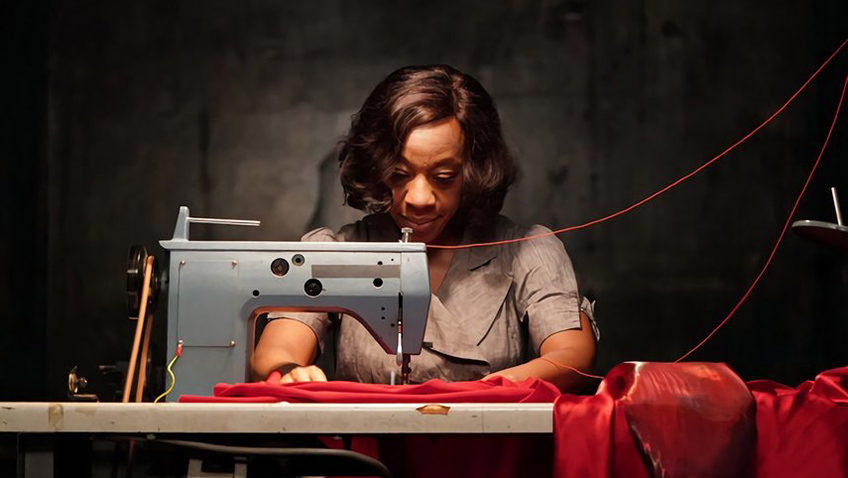 Marianne Jean-Baptiste in In Fabric

Sheila is not old fashioned in using the classifieds in a newspaper. Her story takes place sometime before the invention of mobile phones and social media dating sites. It is, no doubt, circa the early 1980s when 46-year-old Strickland was growing up in Reading, where part of the film was shot. Dently & Sober is a stand-in for the family-run Jackson’s Department Store which closed in 2013. In an interview, Strickland suggested that the store, symbolic of our consumer culture which is parodied in the film, impressed young Strickland with its elegant displays, scary mannequins and with the mobs that descended on the store during the sales.

Strickland goes up against Ricky Gervais’s The Office in scenes at Waingel’s Bank where Sheila’s bosses-from-hell Stash (Julian Barratt) and Clive (Steve Oram), put on a show of absurdist farce. Their passive-aggressive act is fun at first, but goes on for too long and starts to resemble a comedy sketch out of another movie.

Bananas Brian (Terry Bird) has picked up the red dress from a charity shop, and, for a lark, he and his mates bully washing machine repair man Reg Speaks (Leo Bill) into wearing the dress at a Reg’s stag night. Reg is engaged to his childhood sweetheart Babs (Hayley Squires) and, after Reg’s ordeal, they wash the dress and the machine breaks. When Reg fixes it, he is fired for breaking the company rules that prohibit repairing one’s own machine. The wedding is compromised.

can be categorised as comedy/horror, but for some audiences, the absurd, cruel humour will not be funny enough; while for others, the horror, which is both psychological and physical, will nonetheless not be scary enough. In Fabric

also risks being seen as an exercise of style over substance, so fastidious and elaborately detailed are the shots of clothing and interiors and so mannered are the supporting characters. The mysterious Miss Luckmore’s character can annoy more than she entertains. The fetishist advertisements and a fight between two customers that spreads to a brawl and a fire suggests that consumerism is self-destructive, and that sales do not always deliver bargains. But some viewers will look back with nostalgia on the days when a family department store chain could prosper and enchant young boys with their exotic displays. High streets are now real ghost towns.

What makes In Fabric

more than an exercise in style over substance is Strickland merges the two almost totally and gives us sympathetic characters that Strickland makes us empathise with and care about. Marianne Jean-Baptiste, still best known for Mike Leigh’s Secrets and Lies, T.V.’s, ‘Without a Trace;’ and as Doreen Lawrence in The Murder of Stephen Lawrence, is so fantastic you miss her when Sheila passes the baton to Reg Speaks. But it is Hayley Squires, the ‘food bank single mother’ in I, Daniel Blake as Babs who runs with the baton in a performance that shines. Strickland’s ability to portray his doomed characters with such tenderness, compassion and spontaneous kinship shows his skill as a writer, but the result is also cynical. Our investment in the characters makes it so much harder to watch helplessly as Pandora’s Box takes its unrelenting course.