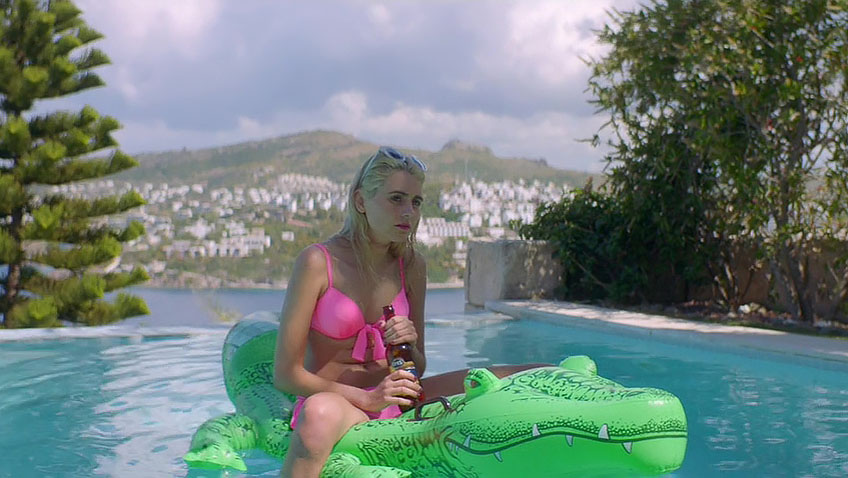 , co-written with Johanne Algren) has a lot in common with Coralie Fargeat’s 2018 debut Revenge. In Revenge, a would-be actress spends a holiday at her married lover’s luxury pool house, believing she is among civilised men when she dances seductively after dinner for him and his guests. In Eklӧf’s depiction of a young woman one step beyond Stockholm Syndrome, revenge would certainly be cathartic, but when it comes, it is so misplaced that it has the opposite effect. Our only point of reference might be the devastating irony of the title, although a few of the characters in the film might disagree that this is a holiday from hell.

In a prologue, a woman we come to know as Sascha (24-year-old Danish actress Victoria Carmen Sonne) crouches on the ground in a white top and shorts, throwing her arms around like whips and twisting her body with abandon like the furies at the Temple at Delphi. There is only one other time in the film when Sascha expresses herself so emphatically, but it is with another kind of violence, the kind she observes around her in the company of wealthy gangsters.

Sascha is elated to be met at the airport by Michael (Lai Yde), her much older boyfriend, who has rented a luxurious, if characterless villa overlooking the Turkish Riviera. The two lovers are far from alone for Michael, a volatile drug dealer, is accompanied by his children and his lackies whom he treats, as he does Sascha, like property.

Sascha is conscious of her looks and knows that glamour pleases. She has bleached blond should length hair; a pretty face, and a fetching pair of breasts on top of a trim torso and long, skinny legs. She sometimes looks like a Barbie doll, a fitting analogy for a gangster’s moll. In the suitcase we see her dragging through an enormous pristine, but forlornly empty airport she has packed Lolita sunglasses and a variety of brightly coloured and revealing bathing costumes, over which she wears skimpy tops or dresses so short that when Michael orders her to remove her panties in front of Thomas (Thijs Römer) nothing has to be lifted.

Sascha meets Thomas, a good looking, young Dutch yacht owner, in an ice-cream parlour and somehow obtains his phone number, whether as insurance should things go wrong with Michael, or to play a dangerous game. 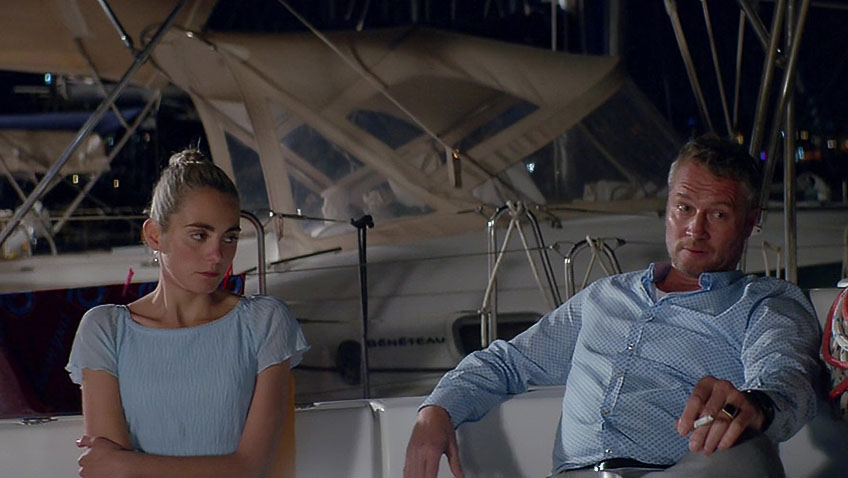 Despite being the property of Michael, who tortures one of his henchmen for a suspected act of disloyalty within ear short of Sascha, she flirts with the unsuspecting yachtsman. When Michael goes to a pole dancing club, Sascha flirts with Thomas and suggests they do drugs – her treat – on a moonlit beach.

In the group’s holiday routine, there is nothing as intellectually stimulating as sightseeing or as healthy as water sports. The day is spent on a yacht (everyone but Sascha jumps in the water to cool off, but no one swims); at long lunches in restaurants by the sea, and lounging around the villa, drink in hand. Sometimes they go shopping and we see Sascha pick out a pair of emerald earrings, which Michael points out are more expensive than diamonds. ‘I’ve found a lady of good taste’, he laughs as Sascha models the gems. But these earrings are not a gift. Everything has a price in this claustrophobic world.

The evenings are often spent socialising at clubs and parties. At one such drinks party Michael spikes Sascha’s drink and all but informs her of his intention when he calls it a ‘luxury drink’. When she fast asleep on her stomach he positions her limbs as though he had bound her by the hands and feet, and then runs out of ideas. There is nothing he can do to Sascha asleep that he could not do to her awake. 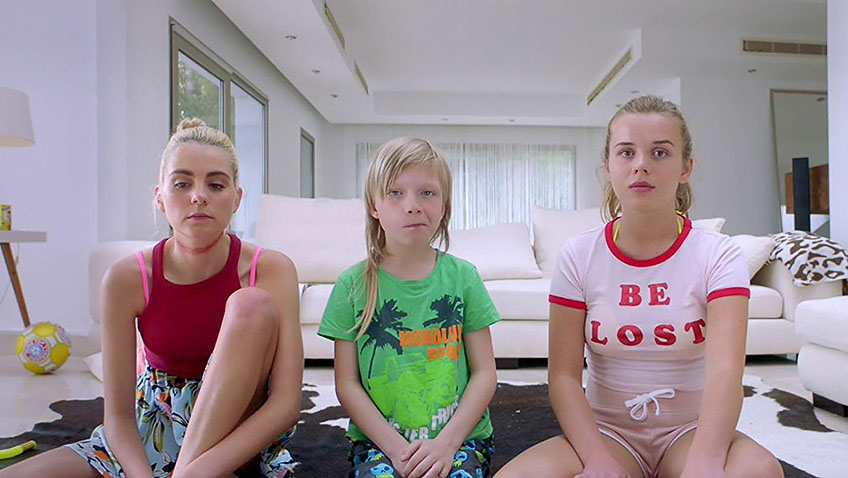 We see this first-hand when, one afternoon, Sascha goes to comfort Michael who is lounging on the sofa, ‘depressed’ about a business deal. Sex is what Sascha can offer to comfort Michael, but he is in the mood for something more violent and rapes her, ignoring Sascha’s helpless slaps of protest. During the ordeal one of Michael’s children runs down the stairs; thinks better of interrupting and runs back up the stairs. The scene is so repulsive that as you watch it you might feel that Eklӧf owes us something – at least a turning point – but no, Sascha has decided to put up with Michael’s demeaning power-plays for the sake of this lifestyle.

The flimsy plot centres around Thomas in a kind of ominous love triangle, but love has nothing to do with it. It’s all about possession. Michael does not take Thomas seriously until he finds his number on Sascha’s phone. He invites his rival to dinner, and here the tension that has been quietly building for some 80 minutes reaches a crescendo, when Michael, who has been playacting the friendly host, turns nasty. Thomas has been warned, but Sascha might feel that she faces Michael’s retribution and she pays Thomas an ill-advised visit to apologise for the evening.

Somehow Sascha greets each day with a smile and a healthy appetite at breakfast, but this must be an act as she tries to fit in with Michael’s family and entourage to be accepted (she is certainly not Michael’s first young mistress). Even when nothing happens, the audience feels the tension and precariousness of every second spent in Michael’s company. Brilliantly filmed by DOP Nadim Carlsen, Eklӧf takes pains to have every shot and location express the coldness and sterility of this hedonistic lifestyle that might remind you of Nikita Mikhalkov’s masterpiece Burnt By the Sun, about a military family’s seemingly idyllic summer holiday in Stalin’s 1936 reign of terror. Even the cheerful pastels of the warm blue sea and fuchsia bikinis prove as deceptive as they were in Jean-Luc Godard’s Weekend.

Eklӧf does not make it easy to understand her protagonist who comes to us with no self-esteem other than what she can see in a mirror and a backstory we can only imagine. You may well find the film sickening and want to walk out, but there is no doubt that Eklӧf and her uncanny star take us into unchartered territory where even the most sophisticated cinephile is forced to navigate without a compass.