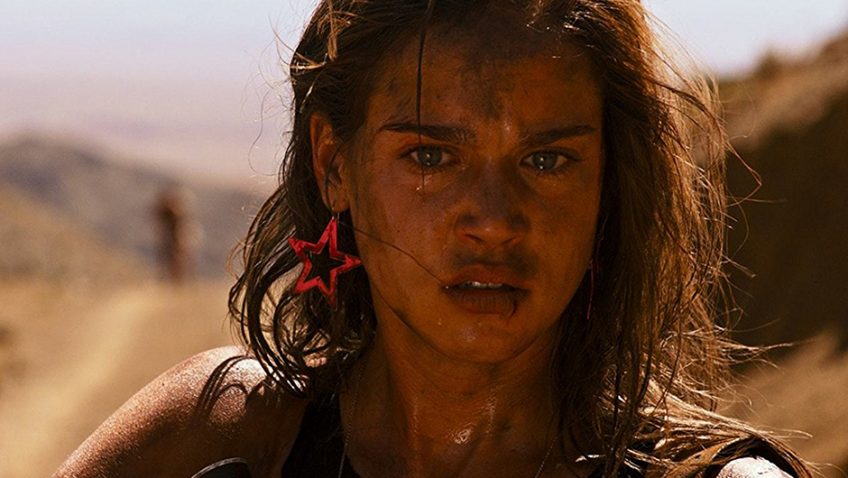 The violence is relentless and insistently graphic. There are four characters with no surnames or back stories, and none are people you’d want to know. The plot is outrageous and you’ve probably never heard of the heroine (Italian actress, Matilda Lutz, Rings) or of the French writer/director, making her feature film debut. Yet Coralie Fargeat’s Revenge

is a knock out. She calls it, ‘the sloughing of a woman… molded around the myth of the Phoenix,’ and Jennifer, the heroine, does, quite literary, rise from the ashes, resolute and a lot wiser. You might be embarrassed to find yourself on the edge of your seat from start to finish, but there’s no other position possible, unless you’ve passed out.

Jen (Lutz) steps off a hired helicopter like she’s arriving on La Croisette at the Cannes Film Festival, looking every bit the model-thin, glamorous, Hollywood movie star that she is longing to become. Pink plastic earrings frame her long brown mane, but the camera stays low to capture Jen’s fabulous legs in her skimpy outfits, designed to seduce.

Her acting plans on hold, for now she is content to be the mistress of wealthy businessman Richard (Kevin Janssens), a man approaching forty with fair hair, rugged good looks and skin on the verge of turning into leather. Richard has invited Jen to join him at his designer chic, all glass ranch house with lines of cocaine and an infinity pool. The pool is not overlooking the sea, but reaches out to a seemingly endless expanse of desert sand.

After a conversation with his wife who is agonizing over a dinner party menu, Richard returns to Jen. ‘It would be so much easier,’ he complains, ‘if the kids weren’t there and you didn’t have such a great ass,’ at which point the scene turns about as romantic as it will get.

Interrupting this weekend getaway, two of Richard’s hunting buddies press their noses against the glass doors, unaware that their friend is preoccupied and cheating on his wife. There is an awkward moment as Richard introduces Jen to Stanley (Vincent Colombe) and Dimitri (Guillaume Bouchède). Making the best of it, as the men sit around drinking after dinner, Jen models her designer outfit with a little dance, either to tantalise her lover, or to assume the woman’s role of entertainer/hostess. When she dances provocatively with Stanley, she is showing off and having a laugh, but he interprets it the way he wants to: she’s asking for it.

That is probably what Fargeat is going for, because unlike the rape victims in the recent Death Wish or any other movie involving rape, Jen is not your typical sympathetic victim. Fargeat not only reminds us that rape is rape, but goes on to show us just what kind of men are capable of such callous violence.

The following morning when Richard goes off to give the men’s passports to the gamekeeper for hunting approval, Stan seizes his opportunity and walks into the bedroom where Jen is changing. Stan becomes furious that Jen rejects his advances and rapes her against the glass picture window. Dimitri declines to join in, but instead of helping Jen, he returns to floating in the pool. When Richard returns, his first thought is for his reputation and the scandal. Fearing Jen will talk, he organises a hunting party, but not the kind they had envisioned hours earlier.

Cinematographer Robrecht Heyvaert’s colours dazzle in a cartoonish hyper-realism against which the rape seems particularly horrific. Stan and Dimitri are filmed in unflattering close ups as ugly, sweaty, blubbery monsters who somehow have wives and families in what seems like another world. Heyvaert and Fargeat make the most of the desert setting and Revenge

has echoes of a Western, complete with shoot outs, ambushes on mountain passes and a night spent around a fire in a cave where Jen brands herself with an Eagle: the metal logo of a quasi-sterilised beer can she uses to cauterize her wound. Jen’s ingenuity goes far beyond a survival instinct. The men dismiss her as a dumb broad because they still think of women as madonnas or whores, scholars or charladies. They will live long enough to regret it. 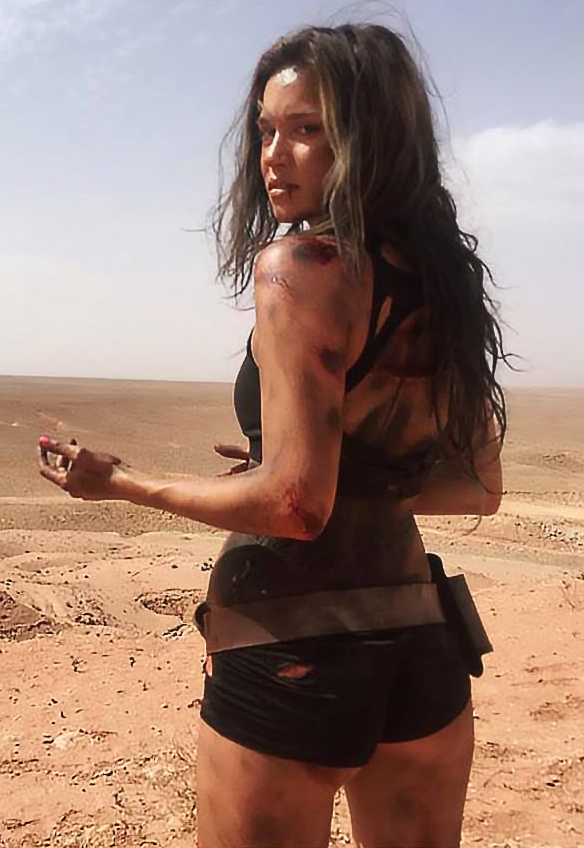 While Jen, like a semi-naked, wounded savage, is barefoot, Stan and Dimitri ride on desert buggies and Richard has his motorcycle. The image of the three predators cornering their prey on a cliff edge, pushing her over and leaving her for dead, is beyond tense: it is shocking in the gory depiction of the dying Phoenix.

Forgeat is not out to make a pleasant movie, but to provide a cinematic experience and create the ultimate revenge thriller. Your definition of entertaining has to be flexible or you’d better stay away. Revenge

certainly makes the recent Marlina the Murderer in Four Acts,  – another female revenge movie directed by a woman – seem tame.

Earlier in the film, Jen explains the lure of Hollywood to Richard, Stan and Dimitri. ‘Everything is possible there. Everything is faster and you can be noticed, too.’ Jen is not ashamed to admit that she wants to be noticed – but on her own terms. So does Forgeat. Like her heroine, Forgeat is pushing it, but no one will be walking out for popcorn.