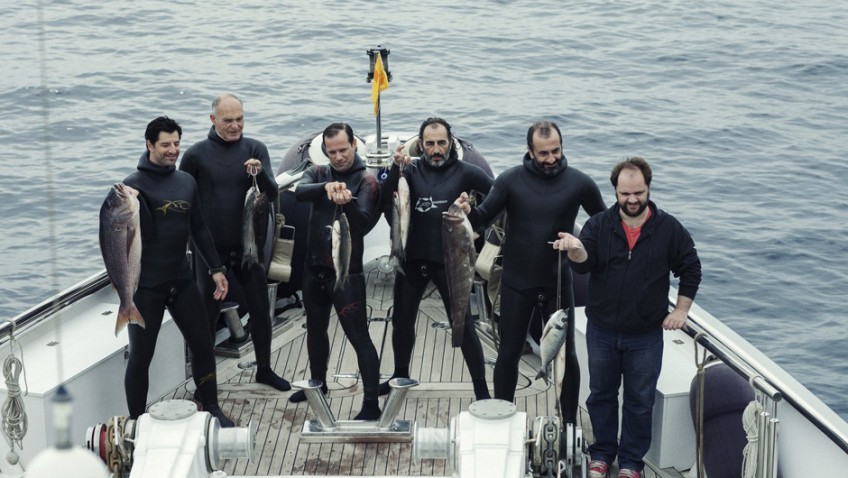 This is not a fun loving French comedy of manners, but an unclassifiable, all-male Greek comedy of manners from auteur Athina Rachel Tasangari. For an increasingly tedious 104 minutes, a group of six men from various walks of life compete against one another on a luxury yacht in the Aegean Sea.  The film won the Official Competition in last year’s London Film Festival and has garnered critical praise.   Some, who consider Chevalier

a crowning achievement of the new ‘Greek Wave’, will consider that the film makes an original and disturbing comment on western society. Others, even many supporters of current Greek cinema, will fail to understand the film’s appeal.

Whether it’s the boredom of men without women, or the machismo of deeply insecure men alone before a mirror, six male holiday makers embark on a game to find out who is the ‘Best in General.’  They are returning to Athens from an off-season water sports holiday with a crew of two who serve as unofficial advisors before beginning to compete amongst one another.  The yacht appears to be a charter and the group leader, whom we see conversing with the crew, is the oldest man, a successful doctor who has invited his outwardly confident, but inwardly troubled son-in-law along.

As the competition turns increasingly personal and revelatory about the men, viewers will be aware that they haven’t a clue as to the criteria being used in the competition or even what tasks or attributes are being judged in this highly subjective competition. This is apparently the joke, but it isn’t one that sets the stage for many laughs, let alone touching moments.   One scene, in which one of the men walks around with an erection as though to disprove an accusation that he is not fit for the task is only typical in that it is neither hilarious nor tragic, just painful. It is also apparently sufficient to give the film an 18 rating.

The absurdist premise of the symbolic game of competition for competition sake might be enough if it provided meaningful insights into the men’s lives and if the dialogue were funny, profound or even interesting. Instead, Chevalier

is a series of largely episodic episodes stocked with characters that we will hardly miss when, in a hauntingly beautiful final shot, they drive off in their various vehicles from the marina car park.