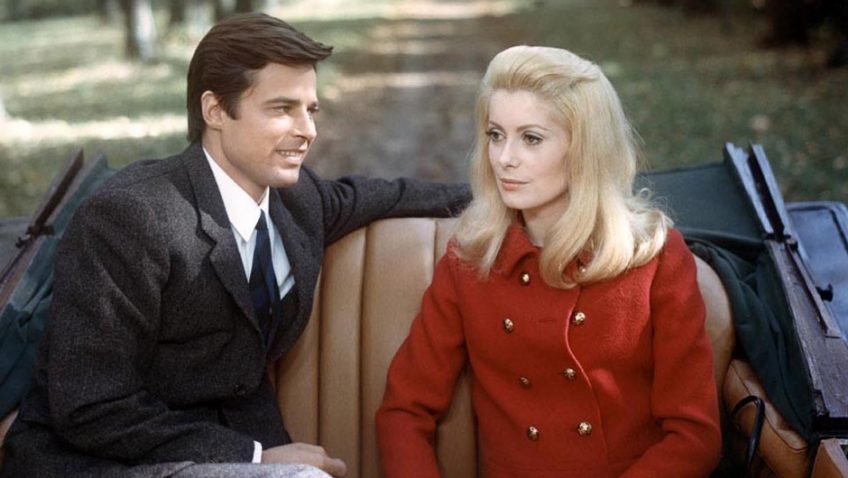 It might seem like yesterday that you were enthralled by Catherine Deneuve’s transition from a frigid, 23-year-old bourgeois newlywed to a popular Parisian prostitute in Luis Buñuel’s masterpiece, Belle de Jour

. Deneuve had won the world’s heart with Umbrellas of Cherbourg, but she was already too confident a woman and too great an actress to worry about tarnishing her innocent image with a film that even today has an 18 certificate. You know it was not yesterday if you the marvellous 73-year-old Deneuve in The Midwife two months ago. No, Belle de Jour

was not made yesterday, but fifty years ago and to mark the occasion you can enjoy the film with a new 4K resolution restored print that looks like it were, well, made yesterday.

The great filmmaker Louis Malle (who 12 years later made Pretty Baby, a film about a 12-year-old beauty (Brooke Shield) living in New Orleans’ red light district) turned down the project. He was, moreover, surprised that Luis Buñuel would find anything of interest in Joseph Kessel’s pulp fiction novel. The Spanish filmmaker, had, however, made Viridiana while in living in exile in Mexico: a dark film about a novice who reluctantly visits an eccentric, wealthy uncle before taking her vows. Before committing suicide, he drugs her drink and informs her that he took her virginity. And that’s just the beginning of the film. Buñuel also made the first surreal film, Un Chien Andalu, in which reality and fantasy is indistinguishable.

, The “real” is false and the imaginary is real. Deneuve plays Severine, the reserved, sexually repressed wife of Pierre (Jean Sorel), a handsome young and affluent doctor. Along with these attributes, Pierre is also very patient, putting up with his wife’s inability to enjoy marital sex. But Severine, with her pale skin, perfect features, long blond hair and her perfect body, is not all that innocent – at least in her dreams. She is haunted by masochistic fantasies which reveal her sexual frustration.

Severine dislikes and feels uncomfortable around Pierre’s creepy, lecherous acquaintance, Husson (Michel Piccoli), when they meet on a ski holiday. But Husson seems to sense the beautiful Severine’s sexual frustration. Audaciously, he gives her the name and address of a Parisian brothel, and, driven by the curiosity one has for what one fears, she secretly goes to the address. There she meets Madame Anais (Geneviève Page) and after a few false starts, becomes Belle de Jour

, “Beauty of the Day”, the third, but most popular, girl in Madame Anaïs’ exclusive brothel. Pierre notices a positive change in his wife, but things come to a disastrous end when Marcel (Pierre Clémenti), a handsome young gangster and Severine’s favourite client, becomes overly possessive. 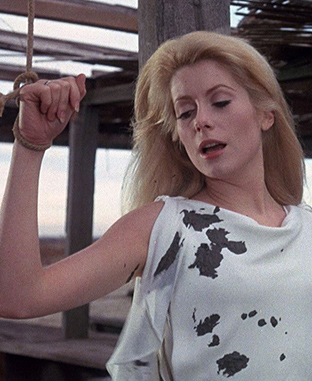 Deneuve went on to play a variety of characters in her incredible career, but Clémenti, who died of cancer at age 57, tended to be typecast in the great performance that marked the rest of his career. With his mysterious (he’s the silent type) presence and sex appeal; his dark, slightly effeminate looks (he was to be cast as a homosexual and a transvestite); long leather rain coat, lethal cane and gold teeth, Marcel nearly steals the show. But no one could take this film away from Deneuve, who has arguably never looked more beautiful than in Sacha Vierny’s lighting and sumptuous cinematography.

The scriptwriter Jean-Claude Carrière, who wrote the interesting script for The Artist and the Model at age 80, enters into the realm of feminine eroticism with care and it’s difficult to accuse Belle de Jour

of being a film about female subjugation. He and Buñuel did their homework. They interviewed women in brothels and learned about unsatisfied bourgeois women who made their own money while fulfilling sexual desires. The decision to dramatise the fantasies they heard about (which is not done in the underlying source novel) was the key to the film’s critical and box office success. It is what Malle could not envisage, but what Buñuel mastered to appeal directly to his audience.

Buñuel continued his long-term collaboration with Carrière with his great social satire, The Discreet Charm of the Bourgeoisie which won the Academy Award for Best Foreign Language Film in 1972. In that film again the two collaborators use dream sequences and fantasy (as well as playing tricks on their characters and the audience alike) to evoke the fears and frustrations of a group of middle class dinner party guests who never get fed. We’ll have to wait five more years for the re-issue, but in the interim, don’t miss Belle de Jour