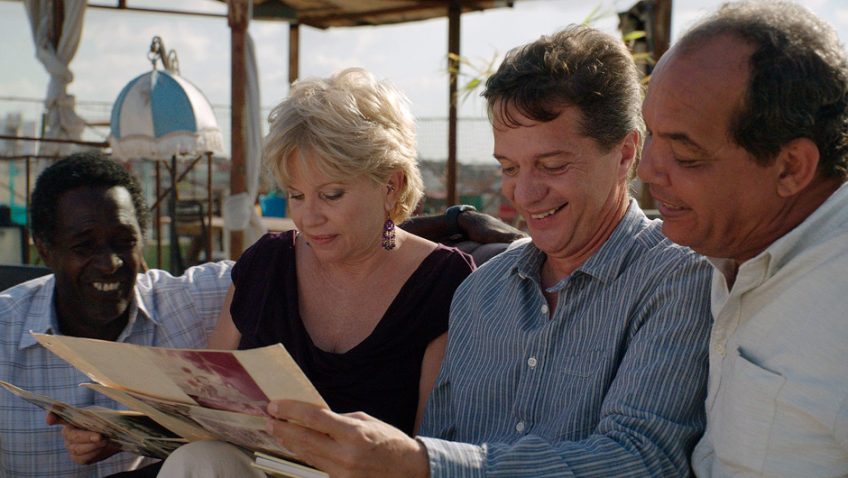 While Homer’s Odysseus (Ulysses) struggles for ten years to return from Troy to Ithaca, what keeps him going is the thought of home: ‘what…I pine for is to go back to my house and see my day of homecoming.’ Fifty-something, washed-up writer Amadeo’s (Néstor Jiménez) homecoming is the occasion for a reunion of five old friends from their revolutionary days, but there is no Penelope warming up Amadeo’s bed in Laurent Cantet’s (The Class) new drama. His wife, Angela, died of cancer while he was living in exile in Spain for sixteen years and Tania (Isabel Santos) has one nagging question for her best friend’s long-lost partner: ‘Tell me how you made sure that Angela never said you were a shit who had abandoned her? We wait a long time for the answer in this talky drama, but as it is related in an after dinner conversation, the answer’s dramatic potential is lost. Return to Ithaca lacks the wit and charm of My Dinner with Andre, but offers an atmospheric portrait of disillusionment and broken dreams in Communist Cuba. 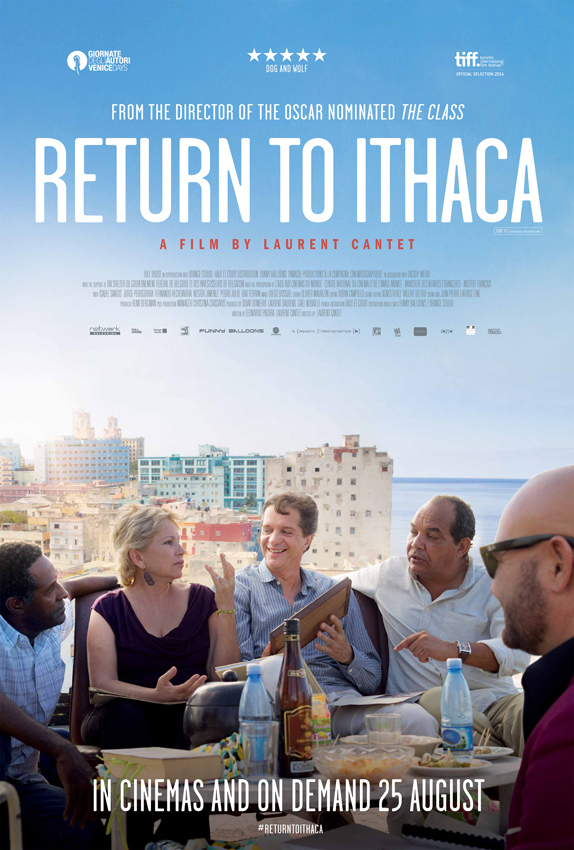 The film is one long, increasingly dark night of the soul for five friends, who jokingly call themselves ‘the pensioners’ club,’ gathered on the roof terrace of Aldo’s (Fernando Hechevarría) home. It is in a working-class neighbourhood of Havana, separated from the dazzling bay by a busy ring road, where neighbours slaughter a pig for dinner, sending the stench of symbolic dried blood to the roof-top. The film’s movement is from jovial and superficial to dark and specific as buried recriminations and emotions and dark secrets are revealed and truths laid bare.

The film opens with the friends dancing to sixties music and discussing the Beatles while Rafa, recalling their idealistic, wild days, comments, ‘we’re turning into a bunch of old farts.’ It is not long, however, before the script, written by the celebrated Cuban author Leonardo Padura Fuentes, with Cantet and Lucia Lopez, turns political. Rafa complains, ‘I had good grades, but never got on the honour roll because I liked the Beatles. Trying to keep the mood light, Amadeus replies, ‘they would have treated you harshly for the Stones, but at least you would have been listening to good music.’ 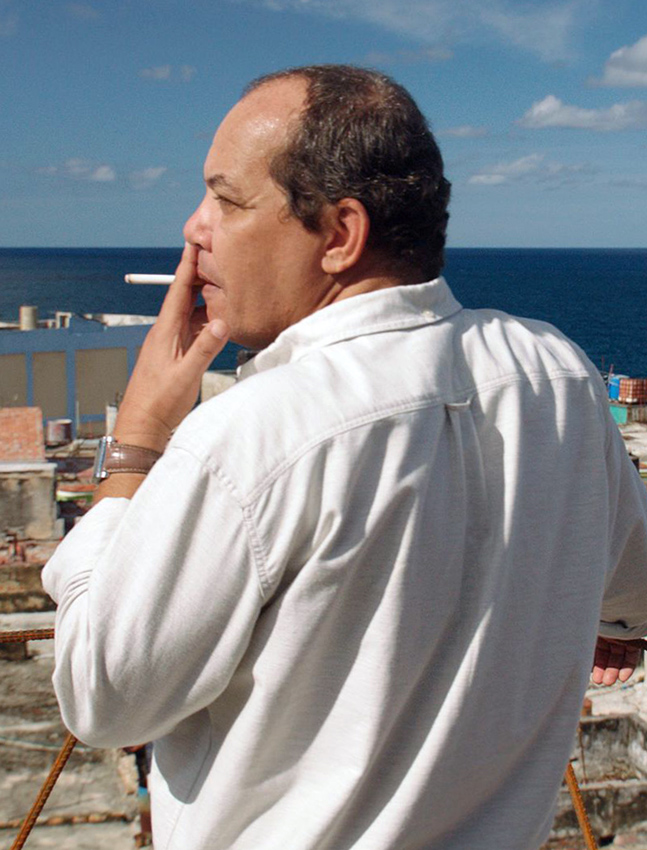 As the friends get drunk on whisky and rum, recriminations and confessions break up the mood that is straining to remain convivial. At one point a group photo of the friends in their youth is produced. ‘Oh merciless time,’ Rafa laments. Time has been merciless to those who stayed behind in Havana and to Amadeo living in exile in Spain. Fear is identified as the dominant factor that drove the friends’ career paths and life choices.

Rafa was a promising painter but he was always being passed up in exhibitions by cronies who invited their friends instead. He ‘daubed’ in vulgar coloured pictures that sold, but felt like he was prostituting his art. Aldo was a talented engineer who became a factory worker, and is the most resigned to his fate. His wife left him for a wealthy Italian, but his son, Yeonis (Rone Luis Reinoso) opted to live with his father.

Yeonis, however, who neither works nor goes to school, wants to leave Cuba to seek better opportunities. Their friend Eddy (Jorge Perugorria) got Yeonis a job in a hotel but the 18-year-old stole from the stock and was sacked. Aldo remains hopeful (because all there is is hope) that his son will ‘find his path’. Though Tania studied hard to be an ophthalmologist, she cannot make ends meet without money she receives from her sons in Florida. When it is her turn (each character has his moment in the spot light) she obsesses over her decision to authorise her ex-husband to take their boys to Florida. 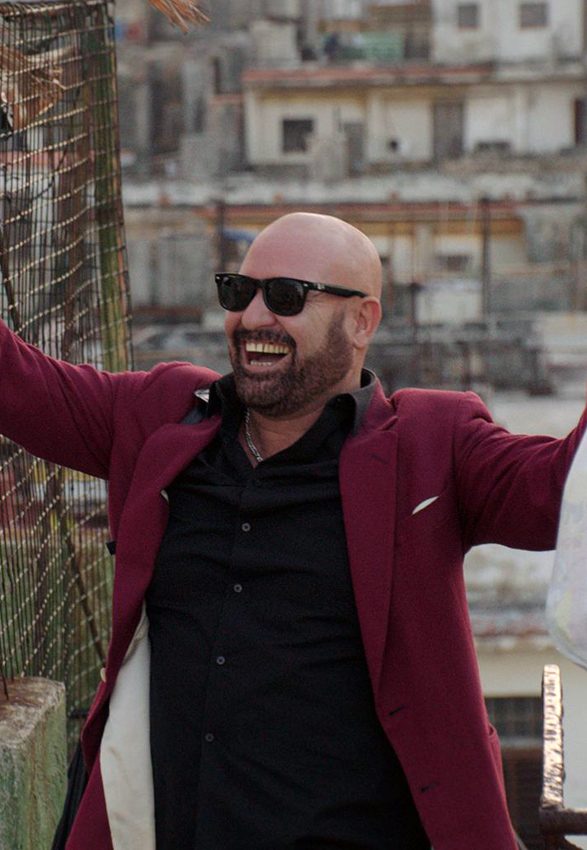 French writer/director Laurent Cantet made two of the best films of the Millennium about middle-aged men made redundant from their jobs: Human Resources and the gripping, devastating Time Out, based loosely on a true story. Cantet then headed South in a film about sexual tourism in Haiti. After winning the Palme D’Or and being nominated for an Academy Award for the French inner-city school drama The Class, he headed south again, with his contribution to an anthology film 7 Days in Havana written by the celebrated Cuban writer Padura Fuentes. After a stab at an adaptation of Joyce Carol Oates’ Foxfire: Confessions of a Girl Gang, Cantet here returns to Havana with a script co-written with Padura Fuentes, based one of his novels.

Padura Fuentes is one of the few social critics of Cuba who has not escaped the repressive Castro regime and indeed, has been awarded the country’s top literary awards. With help from the celebrated novelist García Márquez, the late journalist, essayist and novelist Eliseo Alberto de Diego García Marruz fled to Mexico in 1990 when he was asked to inform on his own father. The poet and journalist Raul Rivero fled the country after being imprisoned for criticizing the government. In an article in the New Yorker Padura Fuentes is quoted as saying, ‘I live in a neighbourhood in which I know all the codes of existence, which I have mastered over many years.’

If only these codes of existence were more obvious here. The stories the characters tell are nothing if not authentic, but Cantet has not found a way to integrate them into an entertaining film. The characters remain little more than mouth pieces. Amadeo’s character might be based on Eliseo Alberto, but he is not the main character and his secret is only revealed at the end, whereas it should be the film’s narrative thrust. Eliseo Alberto said, ‘The worse thing about exile is that the places you inhabit don’t remind you of anything … exile becomes your homeland.” The friends warn Amadeo that despite feeling like a stranger in Spain, he will not have an easy time in his real homeland. The emotional, social and political challenges facing a returned Cuban exile might be the starting point of an interesting film, but sadly, Return to Ithaca is not it.