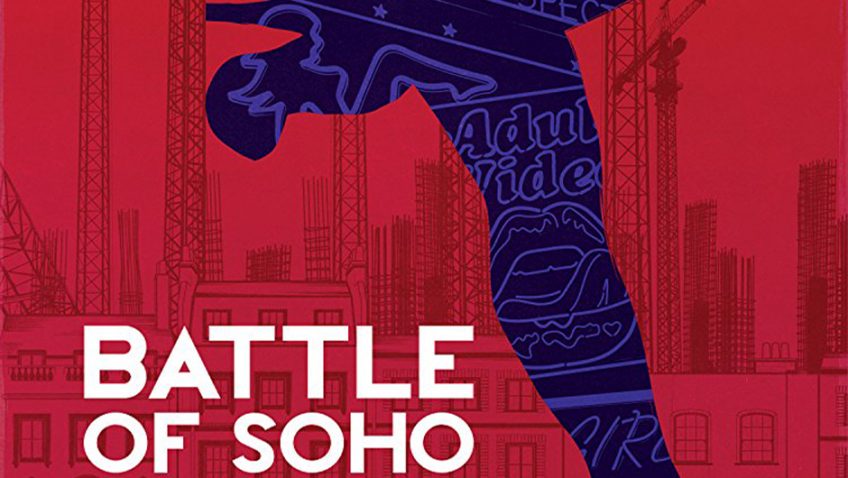 We all have an interest in the Battle for Soho

Despite the title, this film (see below for screenings) about the gentrification of Soho has wide ranging significance. All over the UK neighbourhoods and buildings that are of values to communities, historians and tourists are being destroyed and replaced with high rent developments that could be anywhere.

London is famous for being a collection of villages, and few have the history or iconic status of Soho. Yet as we hear – from a large and diverse selection of talking heads – in Aro Korol’s passionate documentary the Battle for Soho, the battle is being lost at a great cost. Why should we care about Soho? One reason is that almost all the films reviewed on this website for the past ten years have been screened in one of the many screening rooms in Soho. Soho is home to most of the UK’s world-famous post production and special effects houses, private screening rooms, film PR firms, and major distribution companies like Sony and Fox.

A more general reason is that Soho is one of London’s most historic areas and many walking tours still manage to find clues to its rich and rapidly disappearing history. Look around and you’ll see that Karl Marx, the essayist William Hazlett, the poet Percy Shelley and the 18th century painter known as Canaletto lived in Soho just to mention a few of blue or white plaques.

If any area should be preserved for posterity (not to mention for our tourism industry) it is Soho. In the 18th century the silk weaving Huguenots fled political and religious persecution in Catholic France and settled in Spitalfields and in Soho. In 1720, John Strype, the historian and Vicar of Leyton, Essex noted that in Soho, “the abundance of French people, many whereof are voluntary exiles for their religion, live in these streets and lanes following honest trades.’ The Grade II listed pub, The French House is an obvious survivor of that period and proof of the honest trades. A mural on the wall near Carnaby Street celebrates all the famous people who frequented Soho, including the famous French poet Paul Verlaine (with Arthur Rimbaud).

In terms of ‘honest trades’ the red light district of Soho might not strike one as worthy of mention, but many of the people interviewed in the film believe what’s left of it is of cultural significance. The world famous burlesque and cabaret nightclub Madame Jojos was closed by the Council in 2014 following a violent incident, but supporters claim the real reason is a desire to gentrify the area. David Hodge, AKA Dusty O, tell us, ‘not only did I lose my income, Soho lost one of its crown jewels: one of the main things that made it special. The venue featured in Michael Winterbottom’s 2013 film The Look of Love, in which Steve Coogan plays Paul Raymond, the Soho porn baron who owned and ran Madame Jojo’s in the 1960s.

The musical retail shops on world-famous Denmark Street are another example of an ‘honest trade,’ even if the Huguenots knew nothing about electric guitars. Henry Scott Irvine of Save Tin Pan Alley and Mark Davyd of the Music Venue Trust tell us that Denmark Street is the only street of music of its kind in the world (NYC has already lost its Tin Pan Alley to developers). Davyd points out, ‘We’ve lost over a third of our grass roots music venues in eight years so there are some serious questions to ask.’

We are told that, ‘as far as the history goes, we have got the birth of song writing, of music publishing, of rock & roll and of British jazz…Up on the North side, you have the guitar makers, indie labels and agents’ who are not having their leases renewed. It is a process of erosion.

Denmark Street is opposite the massive building site that, in addition to giving us a new Tottenham Court Road underground station, will one day be delivering Cross Rail. As one performer who has lost her livelihood points out, ‘it’s all about bringing people into London, but what they are going to do [when they get there], I don’t know.’ Tim Arnold of Save Soho wonders, ‘how much more demolition and reconstruction Soho can take.’

One thing someone stepping out of Cross Rail might not be doing is seeing some of the best films in the world at the Art House cinema Curzon Soho, the Curzon group’s flagship venue. Ally Clow of Curzon/Artificial Eye tells us that Cross Rail’s current plans ‘will take a huge chunk of Soho with it,’ including this wonderful cinema. There is a petition and the cinema group is in talks to discuss alternatives and show Transport for London, ‘how special a place Soho is.’

When the film travels north to Camden, it muddies the water a bit as the areas are quite different, and many can argue that Camden is already too far gone for all but targeted conservation. But in focusing on The Black Cap, the debate turns to one about the most effective way to protest. Many believe that street protests will only work against the cause. When the Black Cap, a well-known gay club, was recently closed, its supporters gathered 31,000 signatures and applied for ACV (Asset of Community Value) status, which the film explains. ACV status was granted. Whether or not they can buy the lease and get it running again is another matter.

While the film is short of opposing views and of the views of developers and TfL, we can imagine that their comments would be too rehearsed to be of any value. But where are the NGO’s, charities and politicians who have an interest in preserving our heritage and, in particular, our niche cultural assets that are at risk?

Screenings and Q&A screenings this week at Genesis www.genesiscinema.co.uk/ and Rio in Dalston www.riocinema.org.uk/

The film also now available on OurScreen for audiences to see by setting up their own screening: www.ourscreen.com/film/battle-of-soho/