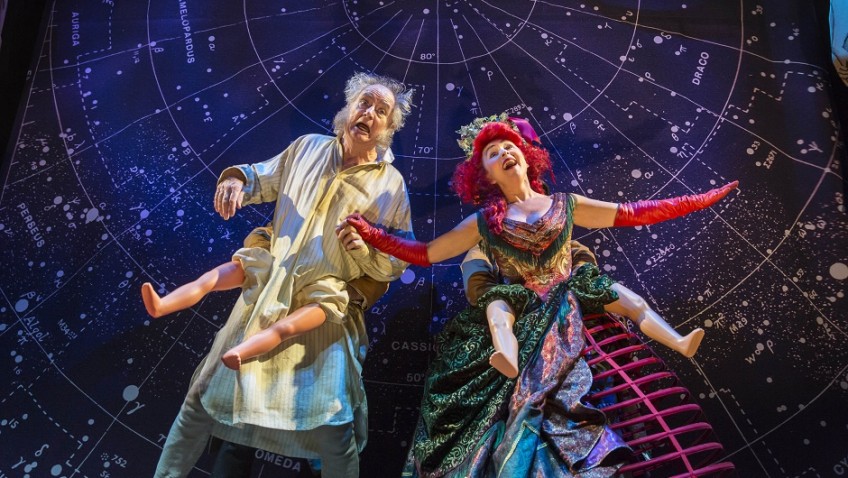 There have been countless stage, film and television versions of Charles Dickens’s novel, ever since it was first published in 1843. 6,000 copies were sold in the first few days.

Within a year there were six unauthorised stage productions. The definitive Scrooge remains Alastair Sim in the 1951 film, which you can see on television over Christmas.

The Very Rev Dean Stanley, in his funeral sermon, preached at the grave of Charles Dickens in Westminster Abbey in1888, pronounced A Christmas Carol to be the finest Charity Sermon in the English language.

The present adaptation is written by Patrick Barlow and performed by Jim Broadbent. They appeared together in some of The National Theatre of Brent’s finest productions. The director is Phelim McDermott and he is famous for his production of Shockheaded Peter. Their approach is much lighter than Dickens’s.

The genial Jim Broadbent has recently played Father Christmas on film in Get Santa, a role for which he is far more suited. You feel he is only play-acting at being Scrooge. He is already redeemed. He doesn’t take the Ghosts seriously and his airborne journeys (in which he literally “legs” it back to his youth) are a joke.

The novel’s most striking image, the terrible spectres of Ignorance and Want, symbolised by two ragged, hollow-eyed and starving children, has been excised. The nearest we come to Dickens’s tract is in an huge photograph of the poor rallying in Kennington Common in 1848.

The production, nevertheless, has considerable charm and Broadbent’s performance is part of that charm. The play is a play-within-a-play and set within a Pollock’s Toy Theatre. The scenery is cardboard cut-outs. The Victorian London skyline is carried on two trolleys

Death is a gigantic black cloak manned by three actors. The Ghost of Christmas Present is straight out of pantomime. Tiny Tim is a tiny puppet. The puppeteers are always visible and their visibility adds to the enjoyment. There are some good jokes with fake snow.