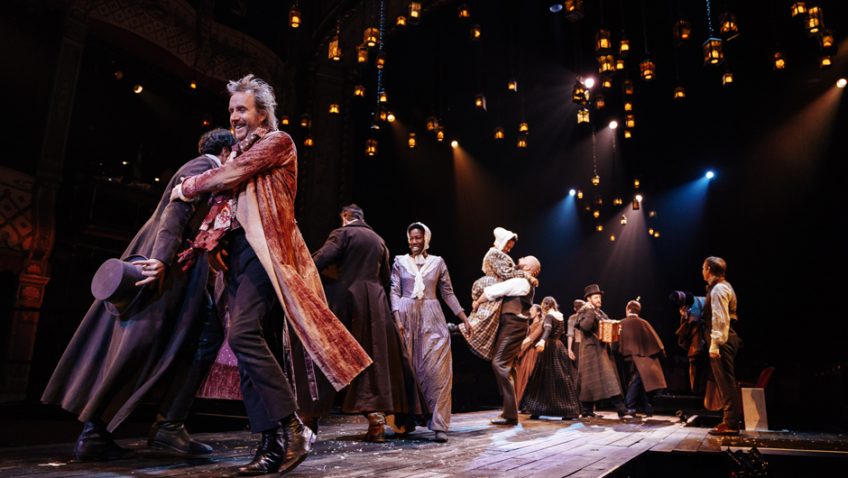 A Christmas Carol – tiding of comfort and joy – don’t miss!

Dickens published his ghost story himself in 1843 at 5 shillings a copy. 6,000 copies were sold in the first few days. Within a year there were six unauthorised stage productions. (This was the era before copyright.) Rhys Ifans in A Christmas Carol

There have been countless stage, film, television and musical versions ever since.
The most authentic remains the Brian Desmond Hurst black and white film in 1951 with Alastair Sim, the definitive Scrooge

The novel is both tract and ghost story; and in our own age when the government is not notable for either its charity or its compassion, Dickens’s social and moral seriousness is still pertinent.

Matthew Warchus has found a new way to make a very familiar story fresh. He has got Jack Thorne to cut it ruthlessly and give us the essence.

Warchus has also refigured the auditorium. The theatre is now in the round and there is a tiny stage in the middle. There’s no scenery, only concentrated lighting. There are Victorian lanterns hanging from the ceiling. Free mince pies are on offer.

One of the major contributions to the production’s success is the lovely music by Christopher Nightingale and the singing of carols and hymns and the ringing of hand-bells. The most magical moment is when snowflakes fall from the ceiling on to the audience and, amazingly, leave not a trace behind.

The production gets off to an unintelligible start with the company speaking in unison. It would be better if just one distinct voice – Dickens’s? – delivered the opening narrative and set the scene.

Scrooge is played by Rhys Ifans as a man who has been damaged in his youth by a brutal father. His performance is surprisingly powerful, even tragic, and one of the most moving scenes is when he has a vision of his own funeral and hears the kind eulogies made by Bob Cratchit, nephew Fred and Belle over his coffin.

Equally touching is his reunion with the now middle-aged and married Belle, the girl he loved when he was young. The most poignant moment of all is when he hugs his younger self and says, “I don’t want him to be me.”

The Ghost of Marley has a striking entrance along a long catwalk through the stalls, dragging his chains behind him. It is strange that Christmas Past Present and Future are penny plain and not awesome enough to give Scrooge nightmares.

Dickens was inspired to write his parable after he had visited one of the Ragged Schools. So It is surprising that this particular production, especially with its links to a charity for the homeless, has not included Dickens’ terrible spectres of Ignorance and Want, symbolised by a little boy and a little girl, (“two wretched, abject children, ragged, hollow-eyed and starving”} which is what this ghost story is all about.