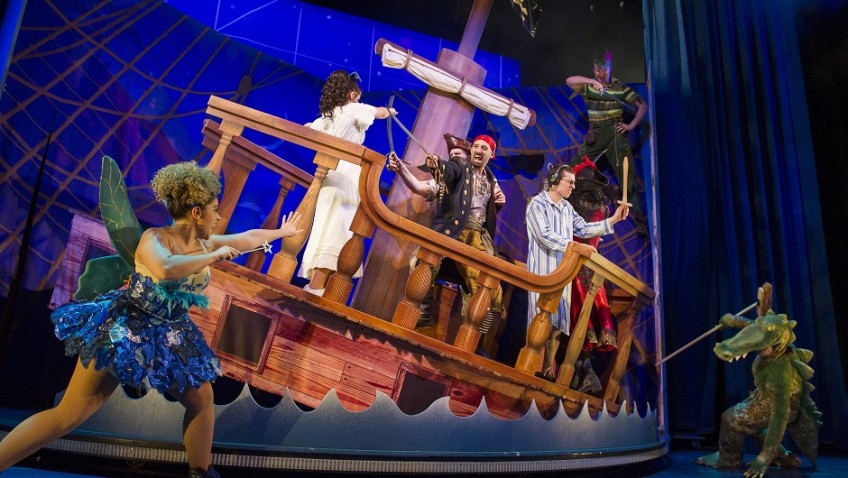 “Peter Pan Goes Wrong is the funniest show in town!”

I once saw a production in which Wendy Darling failed to fly. “Don’t worry, Wendy,” improvised Peter Pan who was flying high above the stage. “We’ll come back for you later!”

The Mischief Theatre Company, who created The Play That Goes Wrong, now let loose their considerable slapstick talents on J M Barrie.  Peter Pan has been turned into “an awfully bigmisadventure.”

The technical disasters are brilliantly worked out and executed. The team is led by Henry Lewis, Henry Shields and Dave Hearn and the teamwork is excellent. The comic timing is perfect and the laughter is continuous.

Adam Meggido’s production defies all Health and Safety rules. The revolving set has a life of its own, revolving faster and faster. Scenery falls down. Bed bunks collapse. A galleon tilts precariously.

Captain Hook loses his hook. Nana, the dog, gets stuck in the dog-door. Peter Pan flies upside down. Tinkerbell gets electrocuted.

A key moment in Barrie’s play is when the audience is asked if they believe in fairies and to clap their hands if they do. Many years ago the comedienne Hermione Gingold, attending a performance, replied in a voice which could be heard throughout the auditorium: “Believe in them? Half my friends are fairies!”

Clap your hands if you believe in Mischief Theatre. If you liked The Play That Went Wrong, you will love Peter Pan Goes Wrong. It’s the funniest show in town.

And the good news is that there is more to come. In March Mischief Theatre is staging A Comedy about a Bank Robbery. I can’t wait.