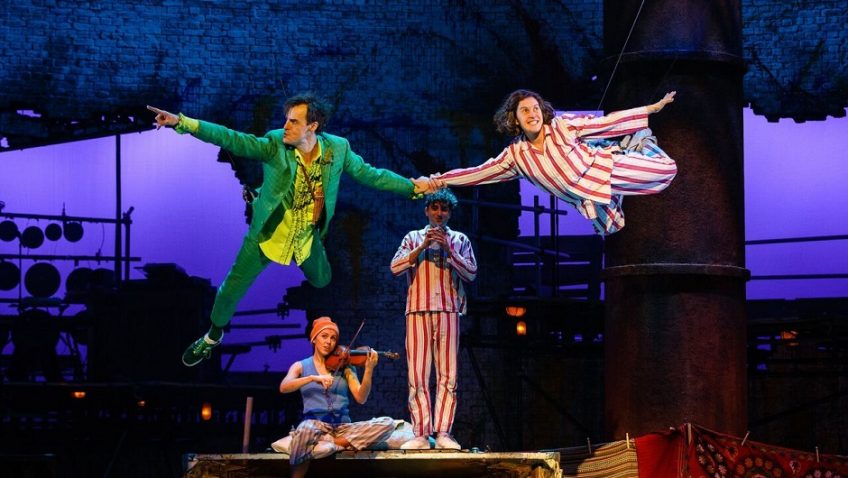 Peter Pan or The Boy Who Hated Mothers

Everybody is in striped pyjamas, including the stage-hands, in Sally Cookson’s production, an original take on the boy who wouldn’t grow up, which premiered at Bristol Old Vic in 2012. Barrie had wanted Dorothy Baird to play Hook at the premiere in 1904. Had she done so (and not Gerald du Maurier) and had the play had its original title – Peter Pan or The Boy Who Hated Mothers – would parents, and especially mums, have taken children in large numbers every year?

Peter Pan is about playing games and make-believe. Here the crocodile is made out of bits and pieces of corrugated iron.

You have to be young, innocent and heartless in order to fly.  At the National the mechanics are always visible.  You can see the wires. You watch the actors harnessing themselves. You can see the professional counteweighters on ladders at the side of the stage.

Barrie hated the Peter Pan stature in Kensington Gardens, saying it did not show the devil in Peter. What would Barrie have made of Hilton’s Peter, an arrested grown-up man (no little  boy, he) in a bottle-green suit?

In 1904 American producer, impresario Charles Froham, was so frightened that nobody would clap, when the audience is asked to bring Tinkerbell back to life, that he instructed the orchestra to start the clapping. He needn’t have worried. The clapping was spontaneous.

Saikit Ahamed would be the first to admit that Tinkerbell, who speaks gobbledegook, is not the most beautiful fairy, yet the audience clapped even before they were asked.

It’s slightly disappointing, having decided to use the Olivier stage’s revolving drum in order to give Hook’s galleon a grand entrance, that it is only half a galleon without sails and looks like a Sherman tank.

Ekow Quartey plays three roles and is noticeably good in all three: Nina (the dog), Tootles (a lost boy) and a hefty merman in drag auditioning for Busby Berkeley.

The final scene, when Wendy (now a mother) meets Peter again after a long absence, is as moving as it should be. The play is about growing-up and growing old. Barrie never grew up.