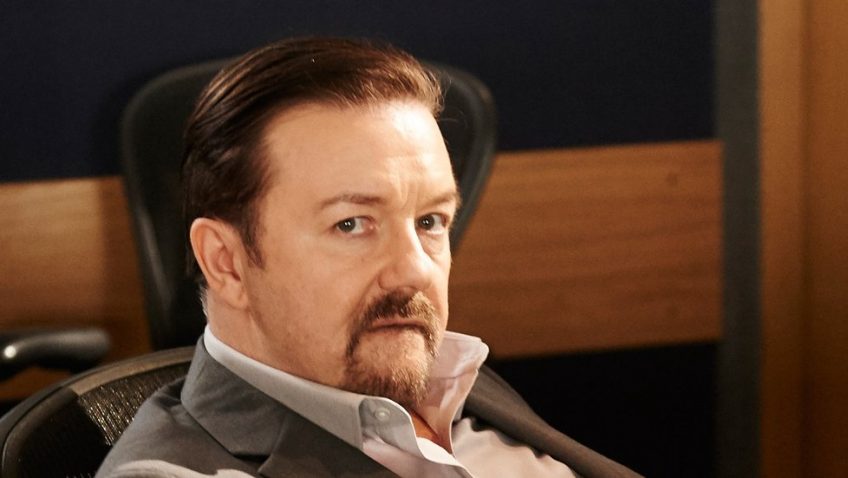 David Brent is one of the great comic creations

DAVID BRENT – A LIFE ON THE ROAD (Entertainment One). In 2002 Ricky Gervais in the TV sit-com, The Office, created one of the great comic characters. The redundant middle-manager is now a sanitary sales rep who takes time off to be a rock star in a band he mismanages. It’s a one-joke mock-documentary, more suited to a TV sit-com series than a full length film. But David Brent, crude, tasteless, offensive, tactless, insensitive, deluded and friendless, a pathetic idiot who never gets it right, is as excruciatingly cringe-making as ever and painfully funny to watch. Ben Bailey Smith (better known by his stage name, Doc Brown) is the rapper Brent patronizes.

THE BLUE LAMP (StudioCanal).This semi-documentary, directed by Bail Dearden and shot mainly on the streets of post-war London, is a tribute to the British bobby on the beat and doing routine duties. The film is essentially a Scotland Yard public relations job and it did wonders for recruitment and the careers of Dirk Bogarde and Jack Warner. Bogarde is a hysterical vicious thug (despised by the professional criminal classes) who panics and kills a policeman when he is caught robbing cinema.  The most extraordinary thing is the finale in which the underworld and bookies join forces with the police in White City Stadium to catch him.  Warner would go on to play Dixon of Dock Green on TV for the rest of his career and become a freeman of all police stations.

SWALLOWS AND AMAZONS (StudioCanal). The Arthur Ransome books were once my favourite reading. They are the only children’s books I have kept. I haven’t reread them since. So I thought the film might just be a nostalgic trip to the Lake District.  Ransome was a spy but that is no excuse for turning Swallows and Amazons (published in 1929) into a pastiche Alfred Hitchcock/John Buchan spy story and setting it in 1935, all in a vain effort to liven things up. The result is a twee, wholesome hybrid which will please neither Ransome nor Buchan aficionados. Interestingly, one of the deleted scenes available shows a dramatic scene very early on on a train. It was cut presumably because it would raise the wrong expectations.