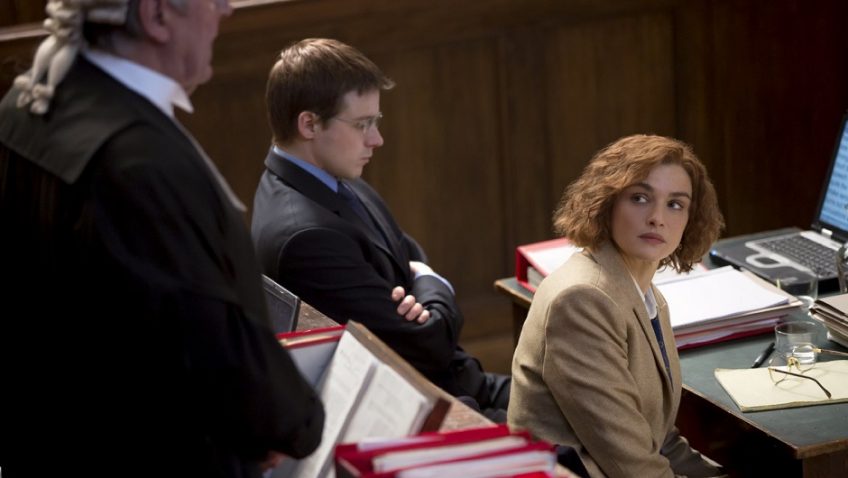 An important and compelling true story for these Post-Truth times.

Denial is a film about a dishonest historian and insidious Holocaust denier that is both distressing and immensely entertaining and satisfying.  It is also the first feature film we’ve seen from 73-year-old British director Mick Jackson (TV’s Temple Grandin) since The Body Guard in 1992.  That was a blockbuster romantic-thriller. Denial is a more thought-provoking film and defies classification.  Based on Deborah E Lipstadt’s compelling memoir History on Trial: My Day in Court with David Irving, it is at once a biopic, a forensic thriller, a court room drama and a Holocaust movie, though even that nomenclature is slightly misleading.  For the entire film takes place between September 5, 1996 and April 11, 2000, and most of it, right here in London, between the offices of Anthony Julius (Andrew Scott) – known as Princess Diana’s privacy and divorce lawyer in Africa House and the High Court on the Strand. Would Deborah Lipstadt, a 49-year-old lecturer in Modern Jewish and Holocaust Studies at Emory University in Atlanta have to prove that the Holocaust existed in a court of law?  It might sound like a no brainer, but as Lipstadt – played with all the quirks of her real-life character by Rachel Weisz – discovers, Mr Irving and the Third Reich made it trickier to do than you might think.

In 1993 Ms Lipstadt wrote a book entitled Denying the Holocaust: The Growing Assault on Truth and Memory.  David Irving (Timothy Spall) crashes the book launch, amusing the collegiate crowd with offers of $1,000 cash for proof that the Holocaust existed and free copies of his new book. This event actually happened, but not at this book launch.  In fact, everything in the film really happened, (the court room scenes are lifted from the court transcript) even if David Hare’s excellent adaptation occasionally changes around the setting and context for dramatic effect.

Three years later, in 1996 Lipstadt receives a letter from her publisher (Penguin UK) informing her that the British historian David Irving is suing her for libel.  Denying the Holocaust devoted about 200 words to David Irving, a published and, at the time, respected military historian. In that book, Lipstadt describes him as a ‘Hitler partisan wearing blinkers’ who ‘distort[ed] evidence…manipulate[ed] documents and skew[ed]…data in order to reach historically untenable conclusions.’  Irving claimed her book damaged his reputation and livelihood and now wants damages.

Lipstadt, a fiercely independent, righteous individual who takes herself and her work very seriously, is a born fighter (Deb-or-ah means ‘lead of her people’) and informs Penguin that she is not going to defend the charge.  Irving, who is English, drives a Rolls Royce and lives in Mayfair represents the ‘respectable’ face of anti-Semitism. Lipstadt wants to show the world that there is nothing respectable about him.

Represented in the film by a dinner party of wealthy British Jews , there are those who advise Lipstadt to let it slide and avoid giving Irving a platform and media attention.  They also warn her about falling under the manipulative spell of Anthony Julius, who, while working full time as a litigator at Mishcon de Reya (currently involved in the Article 50 challenge), obtained a PhD in English Literature, with a published thesis  entitled, TS Eliot, Anti-Semitism and Literary Form. Julius offers to take on Lipstadt’s case pro-bono, leaving her to fund raise for the substantial costs of expert witnesses and her expenses. The book, though not the film, describes the generosity of Emory College and American Jews who felt it was their battle, too.

When Lipstadt arrives in London she gets a crash course in British libel law and legal strategy. Far from being dry, these are among the most fascinating scenes in the film as Lipstadt must get used to deferring to the expertise of others. First, unlike American libel law, in the UK, there is no presumption of innocence: the burden of proving the truth of a defamatory statement (called the ‘atom bomb defence’ to libel) is on the defendant.  As Julius explains, the strategy is not to prove that the Holocaust happened, but that ‘the sting’ in Lipstadt’s libellous words is true. The defence must prove that Irving’s falsifications of the truth were intentional and motivated by anti-Semitism. Secondly, the solicitor, Julius, will not be speaking in court.  That is the job of the brilliant, Scotch drinking, fly fishing QC Richard Rampton (convincingly portrayed by Tom Wilkinson, Belle, The Best Exotic Marigold Hotel) who is best known for the McLibel Case. Lipstadt has her doubts about Rampton’s qualifications until she is awed – as are we – by his performance in court.

Lipstadt objects to a key element of the defence team’s strategy. As Irving will be a litigant in person he will have the right to cross examine Lipstadt and Holocaust survivors.  Julius shows her video footage of him taunting survivors and reducing them to tears. When Lipstadt, who is a bit of a control freak, learns that she will neither take the stand nor talk to the press, she is livid. ‘It’s not a test of your credibility,’ Julius explains; ‘it’s about Irving. Our strategy is to starve Irving – and you on the stand would feed him.’  The idea extends to refusing to look Irving in the eyes.

In an early coup for the defence, Julius and his talented assistant James Lipson (Jack Lowden), manage to persuade Irving to bypass a trial by jury for a trial by Judge.  Appealing to his ego, Irving agrees that ‘we cannot expect a jury to understand what it has taken [him] a lifetime to master’. The desirable by-product of a trial by judge is ‘a written judgment [that] will stand against [Irving] forever.’

We can admire and sympathise with Lipstadt, though it is difficult to warm to her.  At times (such as during Rampton’s forensic visit to trip to Auschwitz), she is slightly annoying.  Weisz is also guilty (as was Tom Hanks in Sully) of spending too much film time jogging, although that was probably not by choice.  To the film’s credit, the only concession made to the portrayal of this noble, but overbearing American is in the casting a notably beautiful actress. Though the cast is uniformly excellent, it is Spall who gives a career best performance, while Wilkinson becomes our hero.

Irving’s assault on truth and memory has obvious relevance in the Post-Truth culture of the USA and countries led by cynical demagogues.  Denial allows viewers to punch the air for a legal victory where truth and humanity triumphed.  Without heroines like Deborah E. Lipstadt, this will not always be the case.