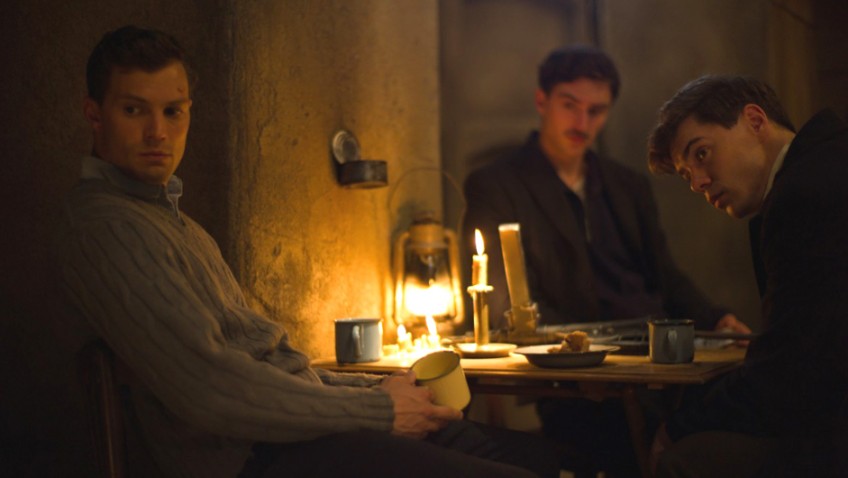 What is a director from Brighton (Metro Manilla), and the stars of 50 Shades of Gray and Peaky Blinders respectively doing in a patriotic WWII resistance tragedy set in Prague?  That question is never answered in Sean Ellis’s Anthropoid, a historically accurate dramatisation of the plot to assassinate Reinhard Tristan Eugen Heydrich, the ruthless joint architect of the Holocaust.  So, no, this isn’t the Sci-Fi movie you suspected, and anyone duped by the title might be disappointed to find themselves going back in time to a little-known, but important, episode in WWII history.

Above a certain budget, it seems that great stories must be given universal appeal. That usually means using English/American actors and diffusing the nail-bitingly tense story with parallel love stories.  If Tom Cruise could attempt to kill Hitler in the guise of a patriotic Bavarian aristocrat in Valkyrie, why can’t two Irish actors, heartthrob Jamie Dornan and the charismatic Cillian Murphy take aim at the highest ranking Nazi after Hitler and Himmler?

Appointed by Hitler to suppress any resistance to his plan to turn Czechoslovakia into a satellite of Germany’s Third Reich, by December 1941, Heydrich has the Czech resistance on its knees.  Desperate times call for desperate measures and the Czech government in exile devise a daring plan called Operation Anthropoid to assassinate him.

The locals fear reprisals and Anthropoid, more than most films about a resistance movement, sets out both sides in the problematic debate in their stark reality.  Though Heydrich might go on to murder millions in concentration camps, the more immediate concern for the locals is the certainty that his death will trigger the mass murder of neighbours, family and friends by way of setting an example. In a freezing cold December, 1941, two British-trained Czech resistance fighters,  Josef Gabčík (Cillian Murphy) and Jan Kubiš (Jamie Dornan), are parachuted into the countryside of their homeland under occupation.  In a nice bit of foreshadowing, Josef suffers a leg injury in landing and the pair takes shelter with two resistance fighters who turn out to be traitors.  The focused, cautious and self-disciplined Josef is suspicious of everyone and reacts quickly – although one traitor gets away.

After this experience, no one can be trusted, but eventually the pair is introduced to “Uncle” Jan Zelenka-Hajský – a surprise appearance by Toby Jones — who proves to be the most dependable and helpful contact they have.  Through Uncle, they are housed with a courageous family, the Moravecs, who know that harbouring resistance fighters is a crime punishable by death.

Two young men on their own who are not working might attract attention, and so the pair is given a good excuse to cultivate the friendship of two attractive, single ladies, with whom they can circulate. To satisfy Dornan fans, Jan is instantly attracted to the pretty, impressionable neighbour Marie (Charlotte Le Bon) and before long the two lovers plan to marry. Marie fixed up Josef with her friend, the tough, savvy Lenka (the excellent Anna Geislerová).  Josef is concerned about Jan becoming so attached to someone when their high risk mission requires focus and the will to die for a cause.  For the more fatalistic Josef and Anna, it is strictly business, although their mutual admiration seems to hint at stronger emotions.

When the day of the assassination finally arrives it should be an excruciatingly suspenseful high point of the film.  Up until this point we have lived through a period of preparation that is sometimes as tedious for the audience as it must have been for the bored and frightened fighters.  Unfortunately, some suspense is lost by the confusing staging and editing in the action.  The assassination is both botched, but ultimately successful which proves the worst possible scenario for our heroes.

Most resistance movements have two enemies: traitors within and the enemy they are fighting.  Such is the case here, and the weakness of the would-be traitor seems so obvious that you wish Josef would just bump him off for the cause.

At the point when you think the film is going to end, Anthropoid undergoes a startling transformation.   The resistance fighters move, literally, underground, into the crypt of the Karel Boromejsky Church where they are hidden by a sympathetic priest – another local hero.  Eventually, their location is extracted by torture and the fast-paced, action-packed siege begins. It is the high point of the film, but one that is too long in coming.

In some respects, the film is reminiscent of Ole Christian Madsen’s riveting Danish WWII resistance film Flame and Citron, but despite the grander scale of Anthropoid, Ellis’s film pales in comparison.  Both are true stories, authentically told, but everything is in the casting (the great Danish stars Thure Lindhardt and Mads Mikkelsen become the two charismatic, troubled Danish assasins) and the execution. While Dornan and Murphy are good actors, they struggle to become Czech heroes, and we never really understand the dynamic of their teamwork in the same we do in Flame and Citron.

What you are left with is admiration for the selfless, brave young men who took a stance to free their country and paid the price.  Ellis pays tribute to the men who made the Germans pay for every Czech fighter slain and, something Czech audiences will appreciate more, to the bravery of the local population.  Ellis does not shrink from showing us, a bit too graphically for sensitive audiences, the fate of the courageous housewife Mrs Moravec (Alena Mihulová) and her hapless son (Bill Milner), a geeky musical violinist who makes daily runs to the church with provisions.