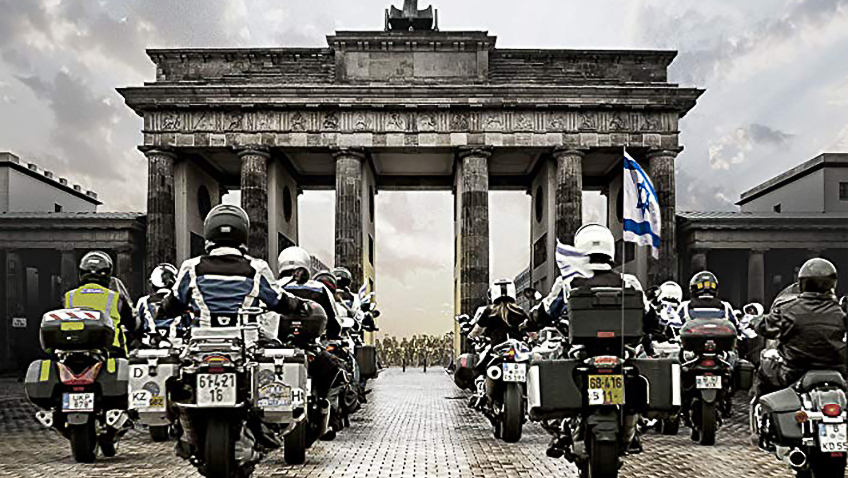 That the release of Back to Berlin

coincide with the end of a series of remembrance ceremonies associated with the end WWI is not a coincidence. It is a film about three levels of remembrance, paying tribute to the two Jewish, American athletes denied a chance to compete for gold in the Olympiastadion during the 1936 Olympics in Berlin; it remembers the first Maccabi Games (or ‘Jewish Olympics) held in 1932 and continuing today; and it honours those who died in the Holocaust and in atrocities against Jews subsequent to the 1936 Berlin Olympics.

Narrator Jason Isaacs stately voice provides the background to the traditional event that we about to follow with 11 motorcyclists (for the lost tribes), embarking on a 3,000 mile journey from Tel Aviv to Berlin. In the late 19th century a group of Jewish athletes formed an athletic group called the Maccabiah whose purpose was to engage in physical activity and to combat anti-Semitism wherever it arose. To ensure that Jewish athletes and their families had access to safe, organised competitions from which they might otherwise be excluded, the Maccabiah established the Jewish Olympics, the first of which was held in 1932 in Tel Aviv. Four years later, in 1936, Hitler staged an Olympic games to prove the superiority of the Aryan race.

In 2015, 80 years later and for the first time ever, the games were to be held in Berlin, at the very same Olympiastadion where Hitler had effectively banned Jewish athletes from competing. Producer/writer Catherine Lurie captures set out to chronicle this historic journey.

What makes the film even more affecting is that the eleven motorcyclists are the children and relatives of Holocaust survivors. Each major stop along the way holds a special meaning for one or more of the bikers. The riders are not only taking the Olympic Torch from Tel Aviv to Berlin along the original 1932 route; they are embarking on personal journeys of discovery.

After leaving Athens, the group stop in Thessaloniki where art dealer Kobi Samuel’s mother was born. His grandparents survived Auschwitz. Kobi’s journey is an opportunity for his grandmother, Angel Margo, to tell her story of life in the concentration camp, and as she does, seated next to Kobi, tears fill her eyes.

Samokov, Bulgaria holds a personal significance for Gili Shem Tov who had never been to Bulgaria and never knew her grandparents’ past in that country. She heard the story of how her great aunt was on the verge of being deported: Bulgaria had just signed a secret agreement with Germany agreeing to ship some 9,000 Bulgarian Jews to death camps in Germany and Poland on 10 March 1943. Suddenly, the bishop of Plovdiv named Metropolitan Kirill showed up at the station (with 300 churchmen) where the Jews were awaiting transport. Kirill pushed through the SS guards and, according to the Great Aunt, shouted a text from the Book of Ruth: “Wherever you go, I will go! Wherever you lodge, I will lodge. Your people will be my people, and your God, my God!” He threatened to lie across the tracks if the trains moved. When news of his courage reached the government, a rebellion of sorts arose. A few hours later, the people in the boxcars were liberated.

The Germans were not alone in murdering Jews. They were greatly assisted by the local fascist population in many countries. On day 6, and after 759 miles on the road, the group stop in Bucharest, Romania and are joined by Maximillian Marco Katz, a business manager and the nephew of a Romanian survivor. He tells the story of the devastation of the famous great synagogue in January 1941 by telling the story of his grandfather and Uncle Isodor.

His grandfather was praying when the Romanian Right Wing Legionnaires pulled the congregation out of the synagogue and began torturing them. His uncle Isidor begged them to take him instead of his father. The Legionnaires tortured Isidor in front of his father and then took Isodor to one of the torture centres. The group arrive at the centre and wander through, unable to speak. Other Jews were taken to the centre of Bucharest and shot and strung up on hooks. Under their bodies was a sign: Kosher Meat. A caption informs us that the Romanian government murdered 400,000 Romanian and Ukrainian Jews between 1941 and 1944.

Although the group are following the original 1932 route, they plan a detour to Auschwitz-Birkenau – a place so unthinkably evil that no one in 1932 – or even in 1936 – could have imagined it. It is difficult for the bikers to imagine the reality of place, even when they see remnants of baby clothes displayed and walk the train tracks that brought so many people on a one-way journey to hell. For press photographer Danny Maron’s father Yarom, it is very real.

Yarom tells the group that en route to Auschwitz a Jewish railway worker, still wearing his uniform, opened the door of the train. His coat was caught and he was dragged under the wheel, but Yarom’s mother threw him out the door and then jumped. The Gestapo were in the last carriage and started shooting, but they missed. They found themselves in the Ukraine, but ‘the Ukrainians were worse than the Germans’. After a month living in the woods, they returned to the ghetto where Yoram’s mother snuck out through the sewers every night at great risk to bring food back to the starving ghetto residents. ‘As a kid of 6 I saw how the Germans stepped on babies with their boots. All of my life I remember those images; I cannot escape.’ He then asks how someone who witnessed those horrors can believe in God.

While the stories the group hear along the way are, of course, depressing and harrowing, the film focuses on the next generation that wants to learn and remember with respect for all mankind. Yet these are still the Maccabiah. Their namesakes were a group of Jewish rebel warriors who conquered Judea and reasserted the Jewish religion in an independent state (albeit short-lived).

Today’s Maccabiah are on a modern day mission to keep their religion, its traditions, including the Jewish Olympic Games, and their faith in the future alive. At the beginning of the 2015 European Maccabi Games, relatives of the two Jewish athletes denied their place in history, Martin Glickman and Sam S. Stoller, take the torch from the motorcyclists. Sam’s cousin passes the torch to Martin’s daughter – wearing her father’s 1936 top. And the games begin.