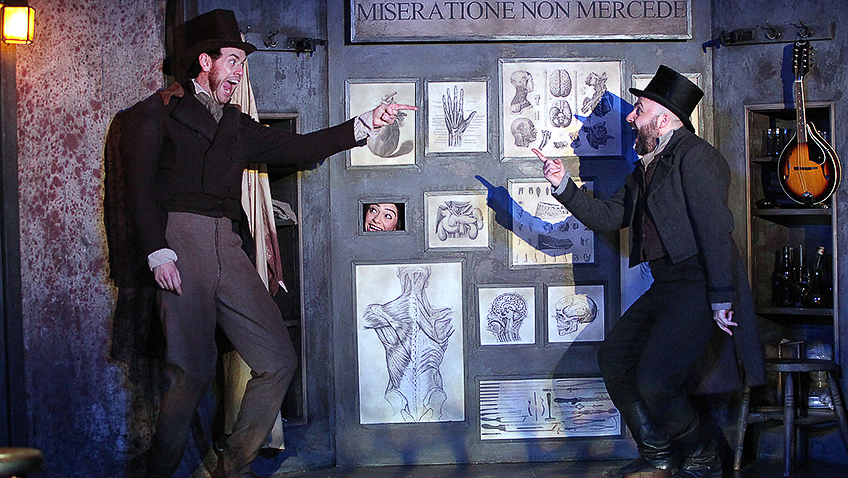 Burke and Hare are one of the most famous double acts

Everybody knows Burke and Hare robbed graves and sold them to Dr Knox, the famous anatomist, in Edinburgh in 1828 – except they didn’t rob graves.

William Burke and William Hare were cold blooded murderers. 16 people died at their hands. Dr Knox turned a blind eye. There was a shortage of legal cadavers and he needed them for his lectures to students.

The murders inspired masses of ballads and much later a short story by Robert Louis Stevenson, a play by James Bridie and a screenplay by Dylan Thomas. 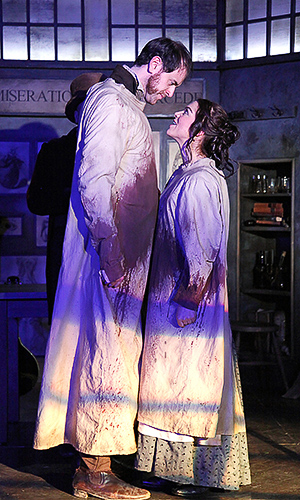 Hayden Wood and Katy Daghorn in Burke and Hare

Burke and Hare have been played by Darren Nesbitt and Glynn Edwards, Jonathan Pryce and Stephen Rea, and Simon Pegg and Andy Sarkis.

The present production is by the same team who staged a spoof of Conan Doyle’s The Hound of the Baskervilles which was seen at the Jermyn Street Theatre in 2017.

Can the Burke and Hare story, which is gruesome fact and not fiction, be as hilarious?

Tom Wentworth’s script is given the same sort of vaudeville performance and aimed at audiences who enjoyed the Alfred Hitchcock/John Buchan 39 Steps spoof and the productions by the National Theatre of Brent and The Play That Goes Wrong Company.

Three actors – Katy Daghorn, Alex Parry and Hayden Wood directed by Abigail Pickard Price – play all the parts. The physical impossibility of their being able to do this is the main joke. The trio half-change their costumes and put on different accents at speed. The show is never as funny as the Sherlock Holmes spoof.

The one and totally unexpected moment of seriousness is the murder of a mentally disabled man with a limp and it works so well that I came out of the theatre wishing Burke and Hare had been taken a seriously as Stephen Sondheim took Sweeney Todd.