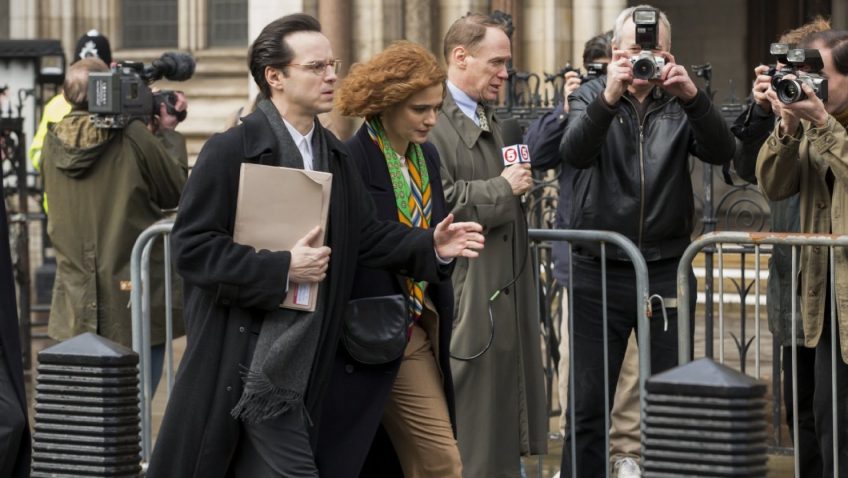 Denial (Entertainment One). American Jewish historian Deborah Lipstadt (Rachel Weisz) accused fascist David Irving, the Holocaust denier and apologist for the Nazis, of being a liar. Irving (Timothy Spall) sued her in the London courts in 1998 so that the onus to prove the gas chambers existed would be on her lawyer (Andrew Scott) and barrister (Tom Wilkinson). They opted for the case to be tried by judge not jury and without Lipstadt and Holocaust survivors in the dock. Their fight for truth and justice is recreated by director Mick Jackson in a modest, straightforward, sincere, low-key manner without any histrionics. The film includes a visit to Auschwitz.

Mandy (StudioCanal) In the early 1950s this film changed the attitude to the way people treated the disabled. Mandy (played by 6-yar-old Mandy Miller) is deaf. Her parents (Phyllis Calvert and Terence Morgan) have very different ideas of how she should be brought up. The progressive headmaster (Jack Hawkins) wants the disabled to be given the same opportunities as everybody else. The documentary bits with coming to terms with being deaf are best. The fictional drama might be a story out of a cheap woman’s magazine. Douglas Slocombe’s dramatic film noir photography is impressive in its own right but quite wrong for the film

Prevenge (Kaleidoscope) is about a grieving, raging seven-month pregnant woman going mental and taking revenge. This superior horror film was written, directed and acted by Alice Lowe when she was heavily pregnant. The shoot had to be quick: eleven days. The baby is in control telling the mother who and whom to kill. Or so the mother believes. “You’re crazy!” shouts one of her victims. “I’m a working mother,” she replies. Lowe takes pre-natal depression to a new horror level in what is very much a woman’s picture. The men have a bad time. Halloween fans will be in their gruesome element in this cut-throat world.

The Naked Civil Servant (Network). Quentin Crisp, one-time male prostitute and art school model, became famous when John Hurt impersonated him brilliantly on television in 1975 in a memorable, frank and compassionate biographical docudrama directed by Jack Gold. Crisp flaunted his effeminacy. He dyed his hair, wore make-up and dressed and behaved flamboyantly so that the whole world could see he was homosexual. Exhibitionist and martyr, he was constantly harassed by the police and beaten up by roughs. He admitted he had no talent but to be himself. The script is full of bon mots, camp and ironic. Hurt’s impersonation remains the definitive performance. Even Quentin Crisp said John Hurt played Quentin Crisp better than he could have.

Split (Universal). Ever since M Night Shyamalan’s directorial debut with the brilliant supernatural Sixth Sense in 1999 I have waited for something comparable. I am still waiting. Shyamalin’s latest horror movie begins with the abduction of three teenage girls by a man (James McAvoy) with 23 different personalities. One of the girls (Anya Taylor-Joy), who was raped by her uncle when she was a little girl, has an instant rapport with him. The girls try to escape from their underground cells whilst he visits a psychiatrist (Betty Buckley), who is not certain which personality she is dealing with. McAvoy, constantly shifting from one character to another, has a showcase for his mercurial talents.

Steve McQueen: The Man And Le Mans (Noah Media). I have two images of the American superstar who died of cancer, aged 50 in 1980: the first is of him driving a motorcycle over the high wire of a POW camp in The Great Escape and the second is of him in Bullitt driving a car in one of the best car-chases ever. McQueen had a passion to make the ultimate racing movie. He wanted it to be a visual experience, fast, dangerous and totally authentic. He filmed in Le Mans during the annual race. Fatally, there was no script and he went wildly over-budget. Director John Sturges walked out. Filming was suspended. Released in 1971, it flopped at the box office. Gabriel Clarke and John McKenna have produced an interesting documentary. There are interviews with McQueen’s first wife, Niele Adams, and son, Chad.