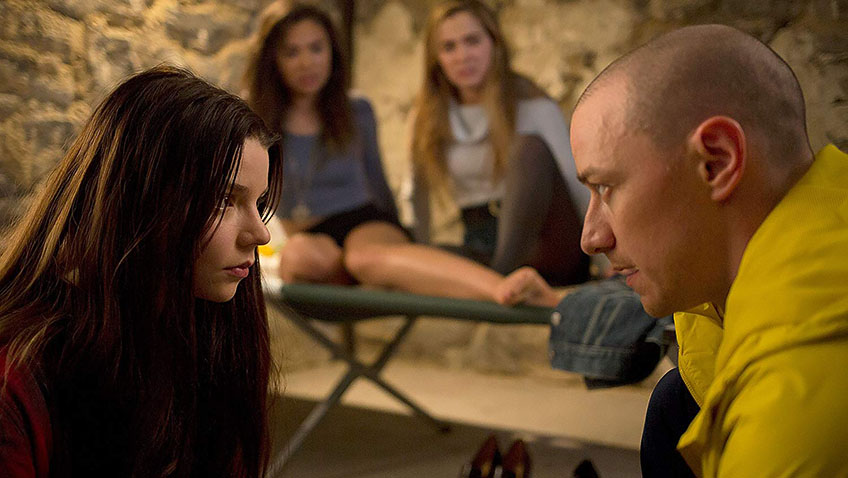 With his last film, The Visit, the Indian-American producer/writer/director M. Night Shyamalan (Signs, The Sixth Sense) learned that less can be more. His critically-panned The Last Airbender might have doubled its $150 million budget at the box office, but the self-financed The Visit returned its $5 million budget 20 times over. If Shyamalan could not get Bruce Willis (Unbreakable, The Sixth Sense) or Mel Gibson (Signs) for a $10 million budget, then who could he get for this psychological thriller/horror film Split

?  The increasingly thrifty Mr Shyamalan actually filled nine roles for the price of one by hiring Scottish actor James McAvoy to play Kevin Wendell Crumb, a man with Dissociative Identity Disorder (DID), better known as multiple or ‘split’ personality disorder.

This inspired casting decision – which McAvoy will not be regretting either when he reads the accolades and is not the only one. The 69-year-old actress Betty Buckley (who co-starred in Shyamalan’s The Happening) is splendid, if somewhat foolhardy, as Kevin’s psychiatrist. Split

isn’t as tight or gripping as The Sixth Sense, and falls apart in the last act, but it’s a lot of fun up until then, thanks to Ms Buckley and the Scottish actor McAvoy (best known for the X-Men franchise, but most fondly remembered for The Last King of Scotland).

From a spoiler point of view, anything you know about this film is too much. That said, the revealing title has given critics the authority to spoil the initial shock that three kidnapped teenagers get when they believe their captor is talking to a woman who could save them.  Those three teenagers are Claire (Haley Lu Richardson), a sweet, middle-class school girl who is celebrating a birthday party with her friends. Her family plan to give two of her friends a lift home. Close friend Marcia (Jessica Sula) and withdrawn school outcast Casey Cooke (Anya Taylor-Joy), whom Claire felt obliged to invite even though she is unpopular at school.

To imagine just how the girls get from the car park to Kevin’s mysterious lair think about the kidnap scene in Nocturnal Animals (another apt title for this film), without everything before it.  Here, Shyamalan front loads the film with arguably its scariest scene, but it’s not all downhill from there.  For the victims’ life in a windowless, inhospitable, underground bunker think about last year’s terrific 10 Cloverfield Lane, and add a few hallucinogens. 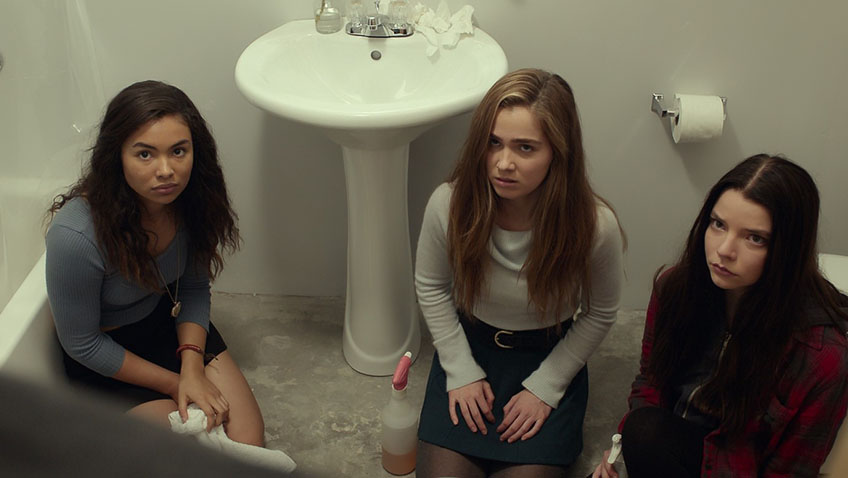 For the kidnapper think of Norman Bates multiplied by 23.  If Norman had issues with his mother, Kevin – well, it doesn’t bear thinking about.  We do have a glimpse of little Kevin hiding from a nasty looking, strict mother but this flashback is a bit pathetic, really. There is so little of Kevin left, and what there is is so weak, that he is taken over by Dennis, Patricia, Hedwig, Barry , Orwell and Jade at the drop of a, well, crumb. We are spared the other 17 characters; but they are all there to ‘protect’ Kevin and to sacrifice the ‘unworthy young’ – those who have known no suffering – to the ultimate persona, the Beast.

For the most of the film The Beast is something to be welcomed or dreaded or, for the mistaken Mrs Fletcher, a fantasy.  The girls know nothing about him. They try to retaliate against their human captor. Early on Claire and Marcia beg the reluctant Casey to help them overpower Dennis – which might have worked.  Casey, hesitates and wants to try it her way, because in one way at least, she and Kevin are kindred spirits.  We learn from distracting flashbacks into Casey’s childhood that when Casey’s hunting-obsessed single father (Sebastian Arcelus) died, (or was killed) , her abusive Uncle John (Brad William Henke) was given custody of Casey.  Holding him off with a loaded gun wouldn’t work anymore as it did on the hunting trips, but it comes in handy (as we foresee a mile away) in the bunker. 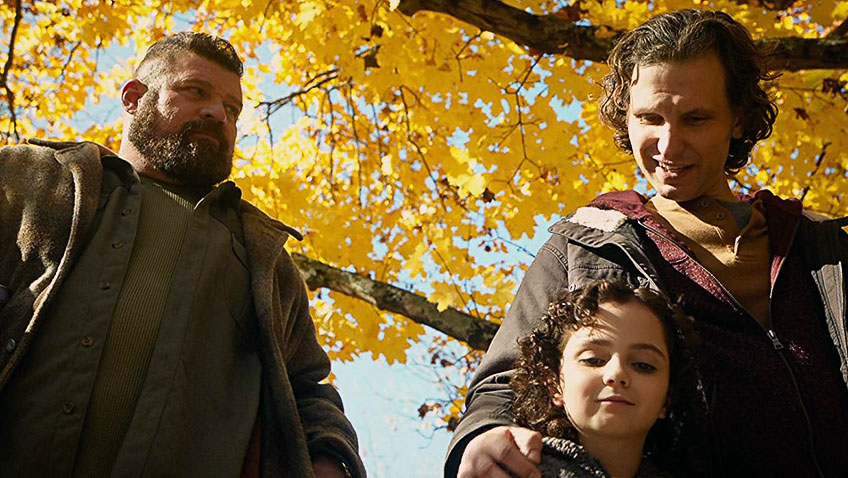 When Patricia in her long pleated skirt and heels proves useless even in the kitchen, Casey pins her hopes on nine-year-old Hedwig a boy she can identify with. ‘Can you help us?’ she asks him outright. He recoils like a naughty boy already fearing his punishment: ‘I’m not even supposed to be here.’ Casey manages to get an invitation to his room and thinks a window he mentions will be the answer to her prayers – until she discovers it’s a child’s drawing of a window pinned to the wall.

Dennis might be a dangerous predator and the girls are gratuitously made to strip to their underwear, but sex is not his motive. They do, however, complain to Barry, the fashion designer with the New York accent. ‘I will speak to him. He knows he’s not supposed to touch you,’ Barry reassures them. But nothing does reassure them – or us – as McAvoy’s characters become truly alarming growing out of one another like a series of Russian dolls. The personas change instantly and without warning. That McAvoy accomplishes these changes primarily through his voice, body language and facial expressions is truly astonishing. 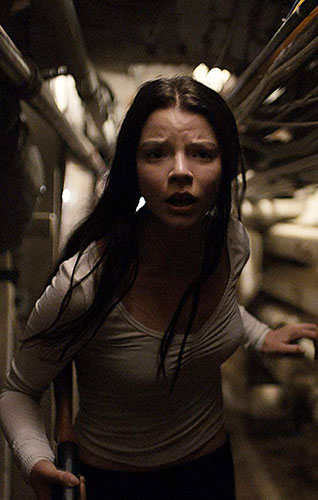 It is also Barry who sends frantic ‘we need you’ emails to Dr. Fletcher (Buckley). When she agrees to see him in her atmospheric, cosy apartment, he seems to regret having sent them. What is he afraid of? Dr. Fletcher is on the right track when she tells her colleagues that DID might be a ‘gift’ to identify a person’s real potential for physical and mental change, but it dawns on her too late that that is what her patient, sick of being bullied and humiliated– is doing with ‘his’ newest identity, The Beast.

The script disappoints towards the end, turning into something more conventional than we have come to expect from Shyamalan. It’s a shame that the inevitable showdown between Casey, Dr. Fletcher and The Beast is not tighter and more imaginative.  A half twist showing us the location of the kidnappings is more ironic than surprising while a silent cameo from Shyamalan’s past does not a twist make.

Haley Lu Richardson (The Edge of Seventeen, Follow) is a talented, striking actress, but she, and Sula, have conspicuously underwritten roles. Only Taylor-Joy’s Casey has any meat to get her acting chops into. At one point all three girls are locked in separate rooms and Casey knows their time is up. As she yells through the walls, urging the girls to try to find something –anything – in their rooms that would help them get out we see them frantically searching. But surely that’s the first thing captives would have done upon being locked in the room?