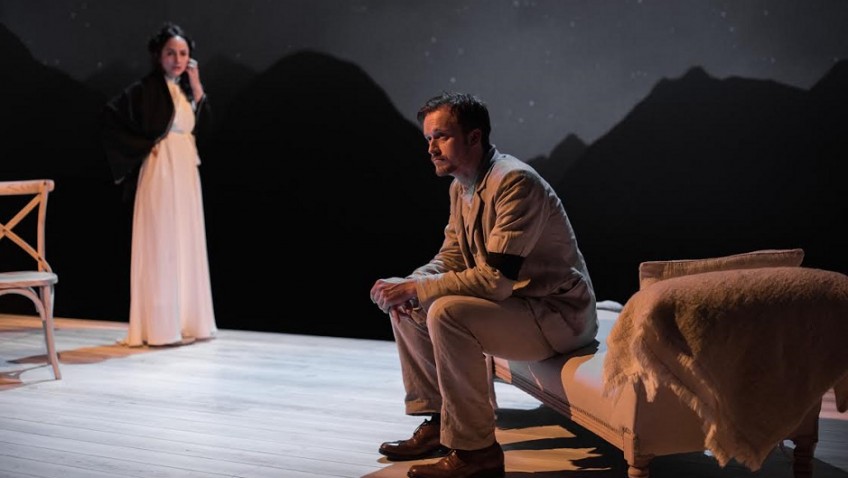 Ibsen writes about a marriage on the rocks

Richard Eyre, who has directed highly successful productions of two plays by Ibsen – Hedda Gabler and Ghosts at the Almeida – now turns his attention to Little Eyolf, which is performed in 80 minutes without interval.

The play has never been popular and has remained the least performed of Ibsen’s major works.

Written in 1894 it had its premiere in English in 1896 when even William Archer, the translator and director, thought “the soul-searching might be too terrible for human endurance in the theatre.”

Alfred Allmers (Jolyon Coy), suffering from writer’s block, intends to give up writing to devote himself entirely to his 9-year-old crippled son and seek his fulfillment there.

His wife, Rita (Lydia Leonard), makes it clear that she is not going to go on sharing him with his son. “I want you all to myself!”

He hasn’t had sex with Rita for a long time. “The champagne was there but who raised his glass?” she asks; and just in case Allmers (or the audience) should miss the innuendo, Richard Eyre has Lydia Leonard open her dressing-gown and reveal her total nakedness.

Allmers loves his sister, Asta (touchingly acted by Eve Ponsonby), far more than he loves his wife; and Asta’s love for her brother had stopped her from marrying a nice road-builder (Sam Hazeldine) who loves her very much

Eyolf drowns, which rocks the marriage even more.  But the truth is that Allmers and Rita never loved Eyolf. They were having sex when he had the accident which crippled him for life; and now that he is dead, all they have left is guilt and remorse.

Can they make the marriage work? What do you think? The tension is maintained and Lydia Leonard is particularly impressive.