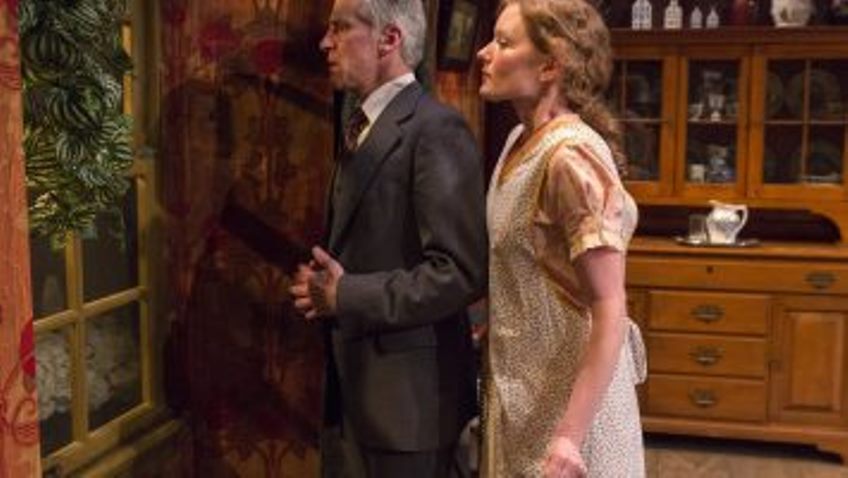 The Mint Theatre is in New York. It’s an Off-Broadway theatre, seating just 99 people, and it’s committed to reviving lost and neglected plays. Their archive is extremely impressive and includes such well-known playwrights as John Galsworthy, James Barrie, D H Lawrence, Arthur Schnitzler, Arnold Bennett and many others who are not so well-known.

I have seen four Mint productions on line and the standards of acting and design are extremely high.

Jonathan Bank, the artistic director, is particularly proud of his championing of Irish playwright Teresa Deevy (1894-1963), who is not known outside of Ireland. Bank has staged three of her plays and is now streaming his 2013 production of Katie Roche.

Katie Roche premiered at the Abbey Theatre in Dublin in 1936. It is said to be Deevy’s most popular play. I should like to see the other two plays of hers Bank has staged: Wife to James Whelan and Temporal Powers.

Katie is an illegitimate girl and has suffered the stigma. She has been housekeeper to a middle-aged brother and sister for the last three years. She has ambitions to better herself. She doesn’t want to be humble. She wants to be proud and great.

She had wanted to be a saint and had thought to become a nun until Stanislaus, the middle-aged brother, proposes marriage. The big age difference doesn’t worry her. But it does worry a young man of her own age who fancies her

Stanislaus treats her like Torvald treats Nora in Ibsen’s A Doll’s House. He treats her like a stern and condescending father would treat a child. In 1879 Nora left her husband and her two children, slamming the door behind her, the sound reverberating throughout Europe. What will Katie Roche do in 1936?

Wrenn Schardt’s Katie is naive, vulnerable and irritatingly mercurial. Patrick Fitzgerald’s Stanislaus is strange and creepy. Margaret Daly as Stanislaus’s sister, who thinks she is too old to accept an offer of marriage, is a much more likeable and convincing characterisation.

The Mint Theatre is streaming five plays from February to May. Check the schedule by clicking here.