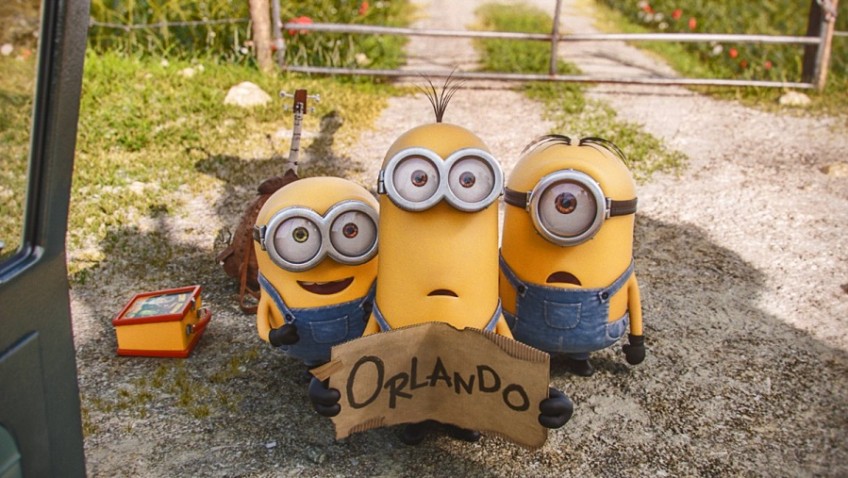 MINIONS (Universal) is a full-length cartoon and it is full of things which will appeal to the young and the not-so-young. The minions are brainless, small, speech impaired, yellow beans who have goggles for eyes and behave like lemmings. They are described as “adorable freaks” (which is surely Despicable and not politically correct?) Three minions, in search of a villain to rule over them, come to London in 1968 and help Scarlett Overkill to steal young Queen Elizabeth’s crown. American audiences may be amused. There is some good slapstick and the minions’ back history is particularly funny.

BELLEVILLE RENDEZVOUS (Altitude). Sylvain Chouet’s French (very French) cartoon is for sophisticated adults. Granny trains her grandson to be a champion cyclist in the Tour de France. He is kidnapped by the Mafia (cardboard thugs). She, her dog and three elderly ladies (who eat live frogs and who were once a famous cabaret act) rescue him. The graphics are striking and surreal. Fred Astaire, making a guest appearance, is eaten by his tap-dancing shoes. Similarly, Josephine Baker disappears in a whirl of bananas. The running gag is the dog constantly running upstairs to bark at commuter trains which pass the window.

THE HONEYMOON KILLERS (Arrow). When it comes to the crimes of the century, obese Martha Beck and ugly Raymond Fernandez were as notorious in the 1940s as were Bonnie and Clyde in the 1930s and Leopold and Loeb in the 1920s. Leonard Kastle directs this modest, very low budget, black and white, 1969 thriller which has a cult following.  Shirley Stoler and Tony LoBianco play the unlikely and unattractive couple, who work their way through the Lonely Hearts column to find their old and vulnerable victims.  He seduces and marries them and then they rob them of their money, jewellery and lives.