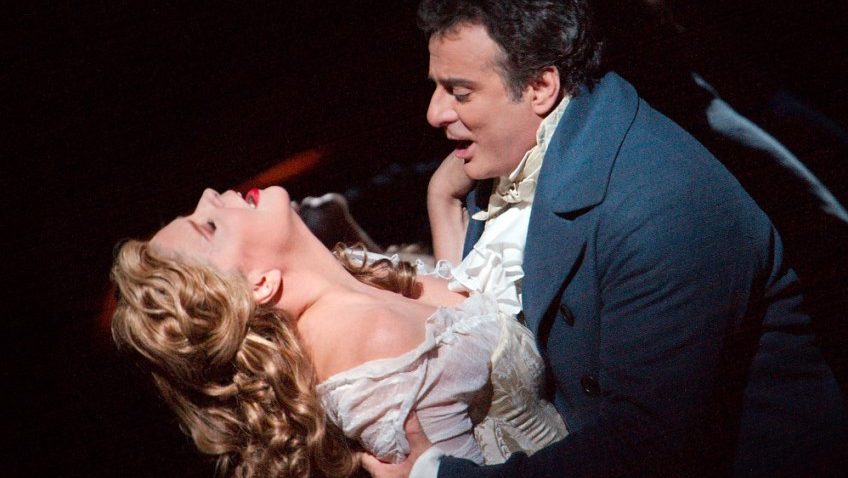 Hector Berlioz’s The Damnation of Faust, which premiered unsuccessfully in 1846, is far more frequently performed in concert than it is staged.

Berlioz didn’t want décor costumes. It wasn’t an opera. He said it was a legend dramatique. The drama, a series of episodes, is in Faust’s mind.

Faust sells his soul to the Devil in return for youth. He falls in love with Marguerite. She goes to Heaven. He goes to Hell.

The Metropolitan New York invited Robert Lepage to give the work as much technology as he wanted.

The basic set is a five-level metal scaffolding with catwalks and 24 panels which become bookshelves, taverns, windows, even rivers.

The initial image is striking. Faust’s library stretches from floor to flies and fills all the stage. Faust, a tiny figure, an old man, looking as old as Ibsen in his old age, comes slowly down an enormous ladder.

There are many striking images: an army walking backwards; soldiers on cables walking up walls of virtual grass; wounded soldiers on cable being lowered into the arms of women, who cradle them pieta fashion.

Mephistopheles in a red leather suit and feathers in his hat looks a very 19th century operatic Devil. He has five agile doppelgangers.

Boating on the Elbe, the boat tips and Faust plunges deep into the water. Sylphs float, swim and dance in the river, looking for Busby Berkeley? The Ride to Hell is photographed as Eadweard Muybridge would have photographed it.

There’s a huge blown-up image of Marguerite’s face, ablaze. Naked male torsos burn red from the heat in hell. The most striking image of all is five identical Christs crucified on crosses hung high on the scaffolding.

Musical high spots include the orchestra, Susan Graham singing D’Amour, L’ardente flamme, Mephistopheles singing his Serenade and Marcello Giordani singing the invocation to Nature. The chorus, too, is in good form.

NB. Every night The Metropolitan New York is streaming a different opera for free. Check what is on by clicking here.