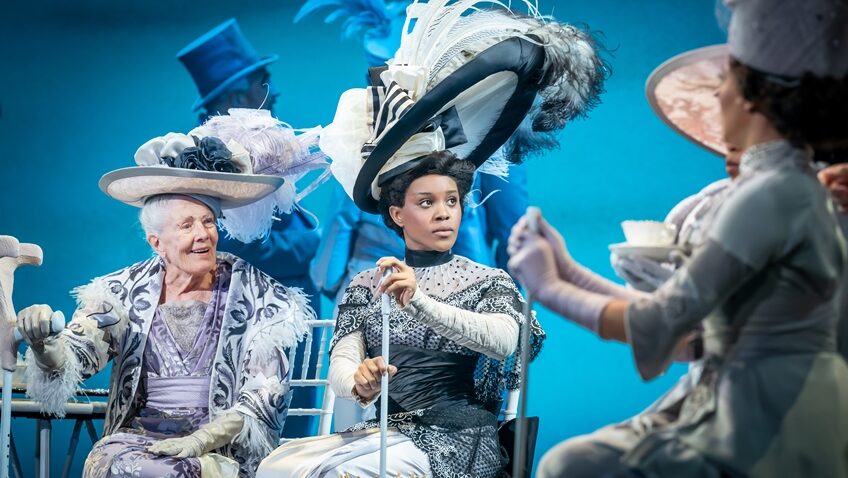 Robert Tanitch reviews My Fair Lady at the London Coliseum

60 years on it is amazing how time has not erased memories of Rex Harrison, Julie Andrews, Stanley Holloway and the costumes of Cecil Beaton, especially the black and white Ascot scene.

The major difference between Bernard Shaw’s play, Pygmalion, and Frederick Lowe and Allan Jay Lerner’s clever musical adaptation is that the musical has a romantic ending.

Shaw did not want a happy ending. He had never approved of the romantic way the original actors (Herbert Beerbohm Tree and Mrs Patrick Campbell) had carried on in 1913.

Henry Higgins, a professor of phonetics, a confirmed old bachelor, selfish, arrogant, petulant, takes up the challenge to transform Eliza Doolittle, a cockney flower girl, into a duchess.

Shaw describes Higgins as “a very impetuous baby” and that is how Harry Hadden Paton plays him, immature, childishly rude and seemingly frightened of women, constantly running away, and too softly spoken for a theatre the size of the London Coliseum.

Higgins has a total disregard for people’s feelings and does not give a moment’s thought to what will happen to Eliza when the experiment is over. The big surprise, therefore, an amazing transformation, is how very serious he becomes when he talks/sings about how he has grown accustomed to Eliza’s face.

Amara Okereke’s Eliza, the first black Eliza, shouts too much in the opening scene in Covent Garden and the performance is initially too broad; but she gets more subtle as the story goes on. I Could Have Danced All Night stops the show and she has a moving scene when Higgins takes all the credit for her success at the ball and gives her none.

Bartlett Sher’s production, lavishly costumed by Catherine Zuber, is true to Shaw and Eliza goes one better than Nora in Ibsen’s Doll’s House. She does not just leave Higgins; she steps past the proscenium arch and out of the play and into the auditorium and up an aisle and out of the theatre through the exit door. The final image of Higgins is him, all alone, devastated.

Sharif Afifi is Freddie who falls in love with Eliza and sings his heart out with On the Street Where You Live. Stephen K Amos, cast as Eliza’s dustman dad, has two music hall numbers. The second, Take Me to the Church on Time, feels totally wrong and gets ridiculous when it introduces boys in drag dressed up as can-can girls.

A major and delightful feature of Sher’s revival and very much part of its appeal, along with all the familiar songs, are Michel Yeargan’s constantly changing and revolving sets, which are very efficiently stage-manged in full view of the audience.