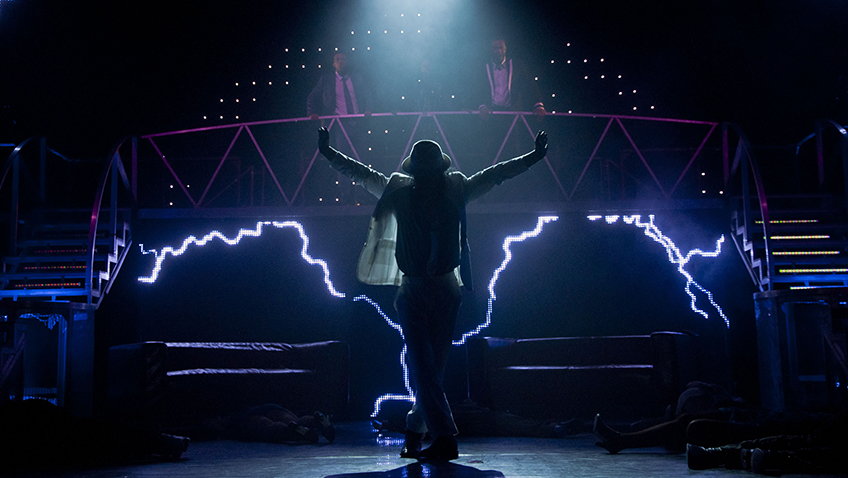 The passionate, committed cast delivers a bouncing, boundless stream of colour and energy

Thriller Live promises us a roller-coaster ride through Michael Jackson’s decades of hits – and what a colossal ride it proves to be! Jackson himself, unique phenomenon of the music world, was a showman through and through, and in this heartfelt tribute, a joyous celebration of the man, his moves and his music, it’s the splendour and dazzle of showmanship that’s at the fore.

Exhilarating stagings of Thriller Live, engendered by Adrian Grant’s endless admiration and devotion to the man and his work, have been touring the world since 2006 and playing the West End since 2009. And not without reason. Even at the end of a 6-month run, this non-stop pounding, dancing, singing, super-high-energy tribute remains fresh and joyful to the end.

Onstage a star-ship of ever-changing colour, light, pixelated pictures, fireworks, streamers, and confetti flashes, strobes, dazzles and surprises throughout, dancers and singers performing their socks off on bridge, stairways and every inch of stage space. The pounding, thrumming thud of bass, drums and keyboards generates non-stop excitement, its seven band members hidden behind the set to be revealed at strategic moments when impressive guitarists emerge to walk their mighty, squealing solos towards the audience. 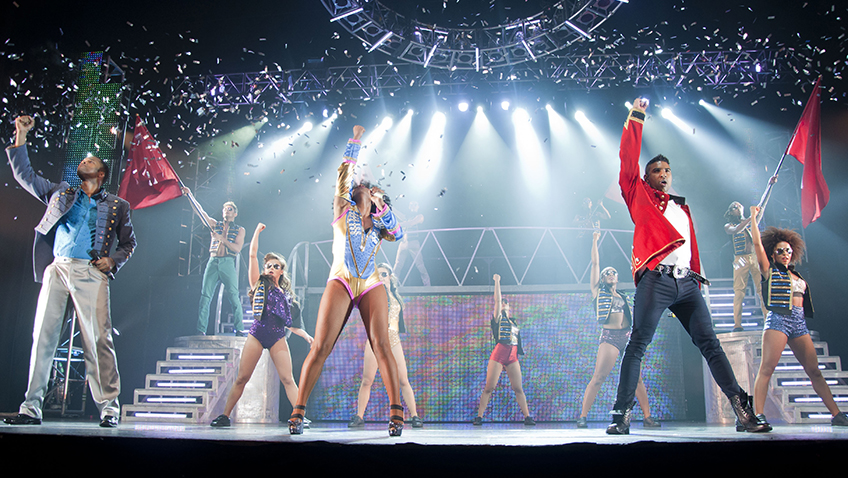 Apart from the occasional, sparse, American-style narrating of some facts, figures and aspirations of Jackson’s life and legacy, the show travels eagerly from one hit to another – around three dozen times! Momentum, impact, freshness and an ‘in the moment’ feel are achieved by maintaining a vastness of rich variety. For two hours, the songs and singers themselves provide their own variety as they progress through seventies, eighties and nineties from the likes of ABC, I’ll Be There and Rockin’ Robin to Off The Wall, Dangerous, Billie-Jean, Bad and the zombie-laden Thriller. Meanwhile, the unflagging, costume-changing, crotch-clutching, frenetically choreographed dancers get little downtime, being at their impressive best in snappy, synchronised, stylised dances like Dangerous. The dazzling variety in the colossal concoction of costumes threatens to outdo even the endless variety of colour and lights, ranging from every conceivable everyday outfit of the time to all manner of sparkling glitter and shine. Michael’s outfits are all there, too – that white suit, the hat, the hair, the red jacket, the white socks and military styles in grand profusion. 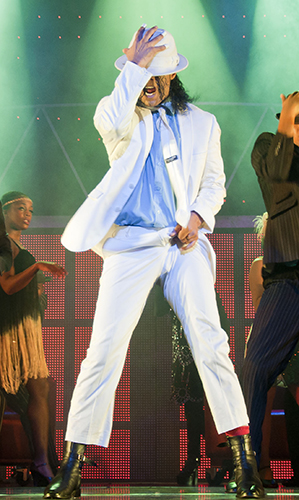 But really, there never was only one Michael Jackson, and on stage, the hits are performed by a Michael with different faces as five high calibre singers prove absolutely that it really doesn’t matter if you’re black or if you’re white. Thrilling singing comes from the magnificent voice of Rory Taylor and from closer look-alike singer/resident director Britt Quintin as well as from sunny, sunny, bewitching Ina Seidou, magnificent moonwalker Eddy Lima and Shaquille Hemmans, all deliciously at home in those upper voice ranges.

With a party atmosphere whipped up via the odd spot of audience participation, the passionate, committed cast delivers a bouncing, boundless stream of colour, energy and magnificent singing, while those moonwalks never fail to raise extra whoops. It’s all a fitting, bubbling, joyful tribute to Michael Jackson’s magic.