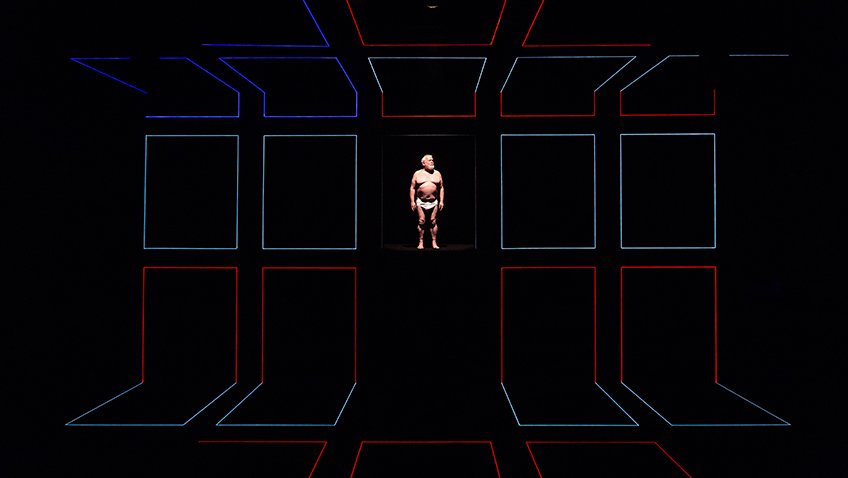 Wow! Wow! And, yes, thrice times wow! Visually, verbally, cerebrally, this is simply stunning. The demands of Caryl Churchill’s Love and Information, first staged in 2012, have been met with near perfection. Six superb actors bring to life over one hundred characters in more than seventy unconnected snatched-snippet scenes that last from under a minute to just a few minutes each, yet it remains exciting and enthralling throughout. In fact, after 105 minutes without interval, the end comes as a devastating shock with deep disappointment that there’s no more to come.

Since the playwright doesn’t specify any gender, age, race or sexuality and offers few hints on relationships or location, the production team is running free, and this team has come up with nothing but sparkling brilliance and vibrant, innovative choices. Max Jones’ set is ideal for assisting busy movement director Jenny Ogilvie achieve a seamless flow of actors, costume changes, locations and props, but it’s also a thing of intense beauty. The clean, crisp outlines of 10 rectangular alcove/windows along 2 tiers flow into floor and ceiling, artistically edged with bright light or lit inside in multiple, ever-varying combinations. Benches, chairs, nurse’s trolley, wheelchair, brightly lit Christmas tree, even a pink upright piano or baby grand can appear and disappear in an instant, while smart recording studio signs can be lowered from above. 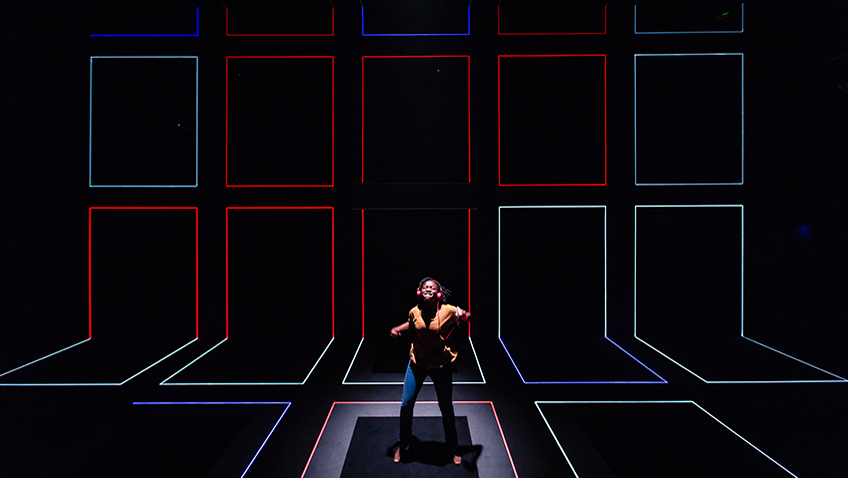 Mercy Ojelade in Love and Information

There’s no stinting on costume impact, either, in spite of the vast numbers required, be it large underpants, space age silver gowns, lab coats, a nice frock for a bearded man, nurse’s overalls or Father Christmas outfit. Sharing, too, in this collaborative triumph of set, costume, lighting and choreographed movement are director Caroline Steinbeis’ canny choices of scene order, characters and locations, and the compositions and sounds of Ben and Max Ringham. From soothing pre-show Swingle-style singing to Love, Love, Love as we leave, their music, songs and resounding echoes strike all the right notes.

The steady flow of pace gives few let ups for breath, yet there’s nothing rushed or chaotic about it. As each scene follows the next, actors and situations are so engaging that audience members are gently carried along and kept always ‘in the moment’, enjoying convincing new characters that provoke new thoughts. Fresh every time, Debbie Chazen, Marian McLoughlin, Mercy Ojelade, Ciaran Owens, Ian Redford and Sule Rimi change clothes, accents and roles at one expertly choreographed drop of a hat after another, and with great singing to boot, especially in Debbie Chazen’s solo with Sule Rimi at piano. Another striking highlight comes when each actor works a top quality, plump-faced Muppet puppet that looks exactly like him/her, though the contemplation of what exactly is meant by the word ‘pain’ is far from childish. 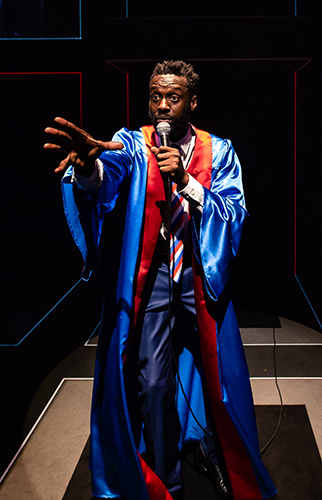 Sule Rimi in Love and Information

So, it’s fabulously stimulating, brilliantly staged and performed, hootingly funny at times, then delightfully weird or chilling or poignant, but what’s it about? Is Caryl Churchill (now 80) merely chucking a notebook of unrelated, snatched dialogue snippets at us? In fact, clear themes, threads and thought-provoking philosophical ideas do run through.

Starting at a remote, candle-lit location with – inconceivable to the young girl – no wifi, phone signals or even TV, and finishing with a high-end general knowledge quiz, we take in scores of scenarios and characters along the way. Human communication, the role of memory, both factual and emotional, and the value and role of knowledge and information are all at the hub. They play such a large part in our identity, in our understanding of the world, and in our interpretation of the meaning behind other people’s words and emotions, most especially in an era when reality blends and blurs more and more into virtual reality, reality TV and soap opera drama, and when technology is rapidly replacing human interaction. We encounter a fantastic living art installation, TV and radio show presenters, a chicken brain dissector, humanoid robots and people with dementia, mentally ill or in prison, and we contemplate genetics, mathematics, romance, the multiverse, secret motherhood, the care of the vulnerable, privacy, free will, virtual reality, memory training, religion, ethics, not to mention the nature of fear and pain, concepts which, like the simple word ‘table’, may not mean the same to any two people. And yet there’s so much more!

Though scenes are disparate and numerous, unlike a web-page full of messages and flashing images, there’s no feel of information overload, and with the focus on one scene at a time, there’s never any loss of thought-provoking sparkle. It’s like daily life really, for isn’t all we ever see of anyone just snippets and partial, biased insights? Heading home with spectator eyes and ears still switched on, you pass a shuffling beggar, people drinking and laughing, someone shouting and cursing, a bizarrely-clad lady with a stick, a nervous hoodie on a scooter, and the show carries on, giving more glimpses of snippets of lives but this time there’s no spotlight. Oh, it certainly sets you thinking, this glorious feast of a show!

Love and Information is at the Crucible Studio until Bastille Day, July 14th