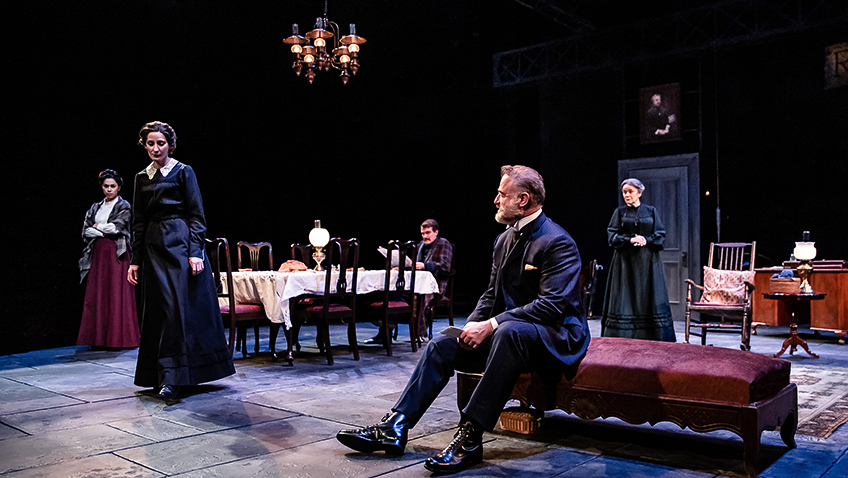 To turn a 3-act play into a 2-act play by running the first two acts together isn’t the kindest way to treat an audience. After 80 minutes, there’s definitely a point where pleasure can become penance even when watching a powerful play, well done. And this is. 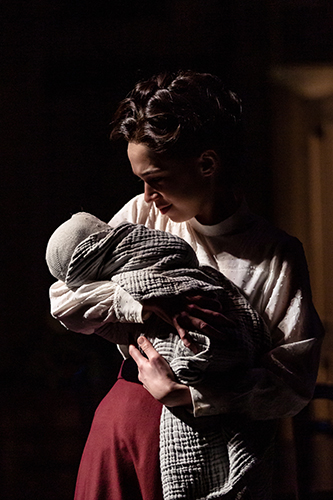 Danusia Samal in Rutherford and Son

In 1912, with its suffragette implications, Rutherford and Son was initially a great success, K.G. Sowerby, covering up, in her wisdom, the fact that she was a woman writer – the daughter of a Gateshead glassmaker, in fact. The play then fell into obscurity until its revival in 1980.

Onstage, the life of Tyneside glassmaker John Rutherford and his family plays out as a gritty slice of life, history and human interaction that embraces broad swathes of universal themes on both domestic and societal levels – class, gender, money, power, manipulation, ambition, loyalty, duty, love and passion. John Rutherford is a hard-working Edwardian industrialist, head of his factory of workers, head of his family, a man with the power to control everyone around him. His ambitions, beliefs and obsessions are set in stone. He’s adamant that his way is the only way and that he’s always right. He demands that his son will carry on his business and that all workers and family members, both male and female, be mindful of their servile, dependent places. Owen Teale presents a sturdy Rutherford, firm and assured in his tyranny and self-belief without a need to rage or bluster. But as his three adult children rebel, his world begins to fall apart and ultimately, the balance of power begins to shift. Ironically, it’s a female, Mary (Danusia Samal) the working class daughter-in-law that Rutherford disdains, who unexpectedly gains the upper hand in the go-getter bargaining stakes as he clings still to the survival of the family business above all else.

Marian McLoughlin has fine presence as Geordie aunt, Ann, steeped long in the ways of the world as it is, toughened by it and accepting of it. Laura Elphinstone as daughter Janet, cowed and embittered by a life of sacrifice and servitude to her father, springs wonderfully to life when love and freedom appear, for a time at least, on the horizon, and at long last she can give voice to the pent up reality of her life as a woman, entirely dependent on the finances, whims and unreasonable demands of men.

The Crucible stage lends itself well to Lucy Osborne’s neat, evocative set, the grey flagstone floor, grey, metal gantries, rough, handsome brickwork and dark furniture all enlivened by candlelight and a flaming open grate. While spiky, dissonant notes unsettle the emotions at the beginning and end of the play, it’s spiky, dissonant discourse and struggle that unsettle them throughout in a play that’s sparse in humour. Bouncing baby Tony who appears at the start, though, does just the opposite!

The play continues at the Crucible until Feb 23rd 2019

Ciarán Owens in Rutherford and Son