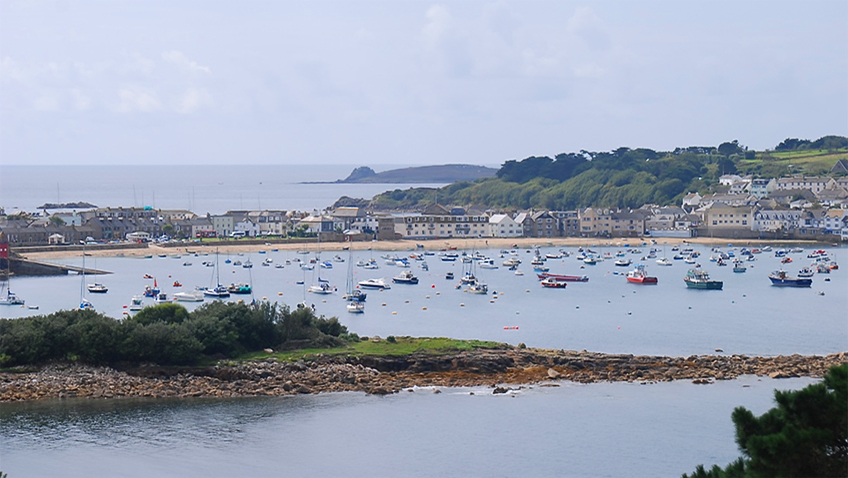 The first tourists arrived on the Isles of Scilly, off the tip of Cornwall, back in the 1760’s during the reign of George III when an enterprising Captain Frank Tregarthen had a bright idea.

He opened a hotel for people wishing to visit the islands and they voyaged on his ship which brought in supplies.

These early Georgian visitors were looked after by his wife and daughters and stayed until the good captain needed to return to Penzance for more supplies, or so the story goes.

Today most visitors still arrive by sea into Hugh Town on the main island of St Marys, not under sail but on the passenger and supply ship MV Scillonian and as they turn the corner off the quay, there is Tregarthens Hotel on the hill above them. 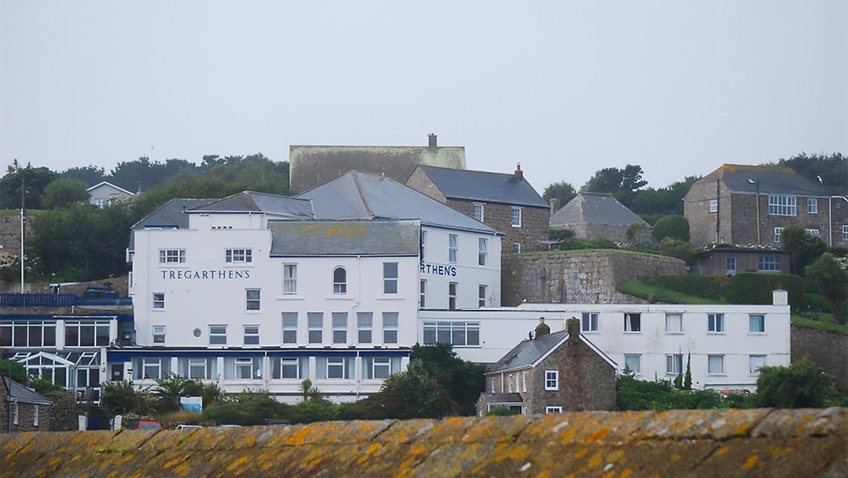 It was acquired in 2015 and extensively refurbished by Nigel and Jackie Wolstenholm, producers of Somborne Valley wine on their Hoplands Estate in Hampshire, and their fruit of the vine is available in the hotel restaurant overlooking the sea.

I often ask people if they’ve ever thought of visiting Scilly and the usual answer is no but it was somewhere they always meant to go and the truth is, they probably never will.

But those who do make it to these five enchanted and almost sub tropical islands, just two hours by sea from Penzance or a short flight from Newquay or Lands End, invariably fall under their spell, as I did, and often return time and again.

So what makes Scilly so special, apart from its soft and surprisingly temperate climate, sparkling blue sea, islands with dazzling white sand bars and beaches and wild flowers everywhere? 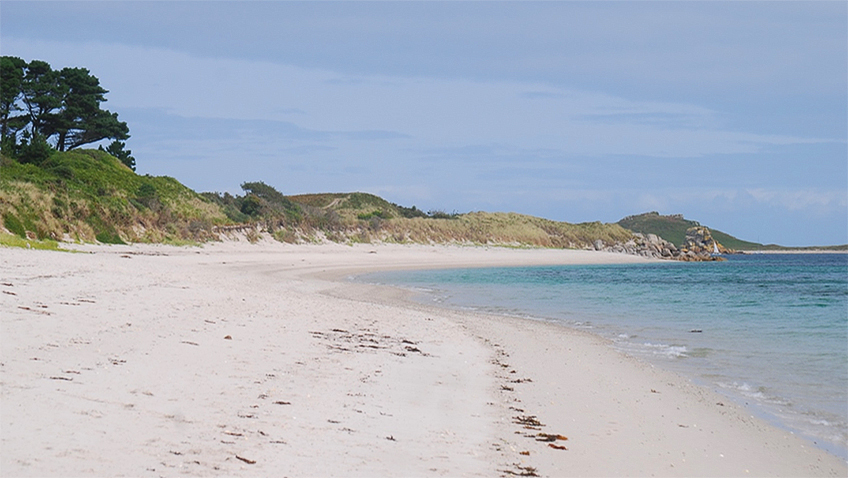 For me it’s boarding a sturdy launch from the Hugh Town quay and sailing over the waves, often with seabirds skimming on the wing, to one of those enchanting little off islands of Bryher, St Martins, St Agnes and Tresco.

You and your shipmates are then cast away for a few hours to wander, along mostly deserted beaches or around quiet lanes and sandy tracks because apart from you and a hundred or so islanders, and those lucky few in limited holiday accommodation, there’s nobody else about.

The sub tropical island of Tresco is a small exception because of its famous Abbey Gardens that are a must to visit but even here one can escape the madding crowd.

Scilly also has a quirky charm with lots of surprises just around the corner like the little wooden stalls filled with small items made for sale by the children of St Martins and Tresco schools. 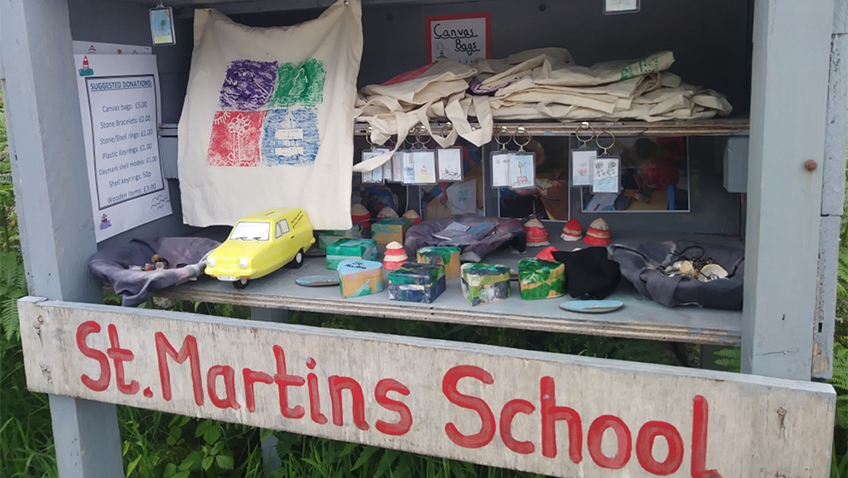 She’s only six but she’s been growing plants in the family garden to sell in aid of island good causes since she was three and raised an amazing £300 for the RNLI last year.

Other little ‘come across’ stalls around these lovely islands sell home grown vegetables, plants and exotic looking succulents, locally produced honey and often sea urchin shells and most have honesty boxes so you simply help yourselves.

On one very early morning ramble I met ornithologist Viv Jackson who was born on St Martins and while also being a fisherman and farmer has also been responsible for planting trees all over the island.

The time comes when most island youngsters have to leave to start careers or further their education in the ‘real world,’ but some like Clive ‘Tregarthen’ Momford return in later years.

He spent most of his working life as a journalist and returned to Scilly in the 1980’s to take over Momfords, the family newsagents established by his grandfather 114 years ago.

His father was also called Tregarthen because the Momford family and that of that enterprising Scilly sea captain had been linked by marriage in earlier times. 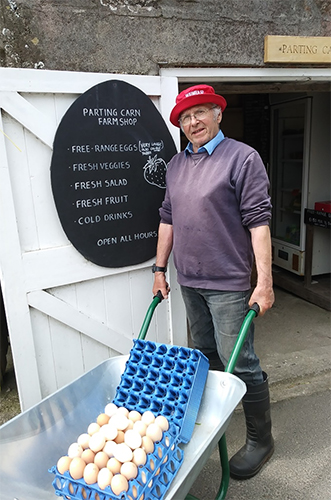 Today the business is still in the family and being run by his daughter Victoria Tregarthen Hitchens.

Another returnee was islander Paul Watts, whom I met wheeling a barrow full of new laid eggs outside Parting Carn Farm, which surprisingly has been in his family since the thirteenth century and is the longest held Dutchy of Cornwall tenancy on St Marys.

Paul, 75, sailed away to New Zealand where he was a sheep farmer for sixteen years but returned when his father wanted to retire but now the farm is run by his son and daughter -in-law.

While some, who grew up in the islands have returned, others have found their way to Scilly by marrying island boys and girls like enterprising little Chloe’s mum Rhiannon who first arrived on a working holiday.

One such was Juliet May who ran a London advertising agency before marrying island famer Andrew and returning with him to live on St Marys where she opened a tea garden on one of his old flower fields bordering the coast path.

She started serving teas from a wooden shack with tables knocked up by her husband and some old chairs rescued from a dump. From those small beginnings, over thirty years ago, Juliet’s Tea Garden, now features a fine restaurant serving fresh produce grown on the farm and terraces overlooking the sea and is one of the islands main attractions.

Like Juliet May, Sabine Schraudolph also had a high powered job in London but she arrived in the islands on holiday and was so taken by their beauty that she decided to make a big change in her life by moving to St Marys, opening a small guesthouse and coffee shop.

Again like Juliet’s Tea Garden her enterprise has steadily grown and readers can learn more about it by visiting http://www.julietsgardenrestaurant.co.uk/.

While Tregarthens is Scilly’s oldest hotel and the magnificent Star Castle, opened to guests since 1933, is the most historic and a memorable place to stay, the newest to be opened on an off island in 1989 is the Karma St Martins. 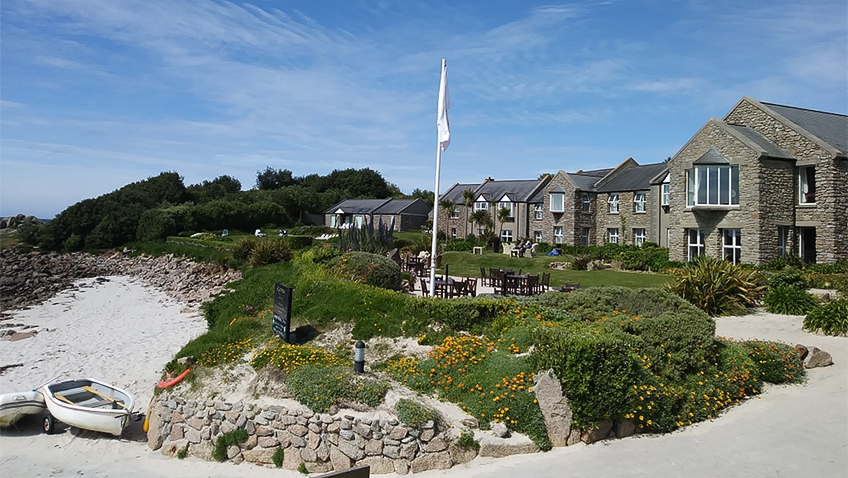 Built to look like a row of old stone cottages with terraces overlooking a lovely sandy beach it offers a quality and a most friendly service which in our case included the gift of a most magnificent chocolate cake for my wife Jenny’s young granddaughter.

Boarding an inter island launch from the quay outside the hotel, I met Manchester construction project manager Andy Trollop, his wife Nina and youngsters Rowan and Faith who are so typical of Scilly visitors because they first came four years ago and have returned every summer .

“We’re tired of explaining how wonderful it is here but people don’t seem to get it that you can have somewhere as beautiful as this in the British Isles,” he said.

For passage on MV Scillonian contact Isles of Scilly Travel 01736 334 220 or visit www.islesofscilly-travel.co.uk/plan-your-trip

The company also operates a Skybus service from Lands End, Newquay and Exeter.