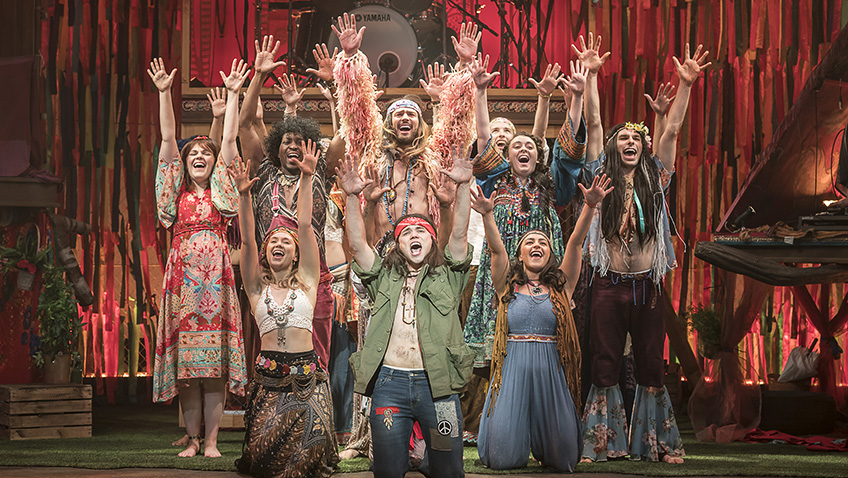 It was over fifty years ago that Hair first burst out onstage to shock the world, honing in on some of the seismic events and social changes that peppered the 1960s. Homosexuality was at last decriminalised; strict theatre censorship was at last lifted; the first contraceptive pills were being swallowed and leading to “free love”, especially amongst hippies and drop-outs and those who were busy newly discovering the merits (and draw-backs) of getting high on drugs like marijuana and LSD. At the same time, young Americans were being drafted to fight, kill or be killed in a horrendously inhuman war in Vietnam, over which protests and draft refusals were increasing. Performers and audiences were living in the midst of all this, of course, and at a time when older members of society were still often absolutely outraged at the sight any young man whose defiant hair deviated from a respectable short back ‘n’ sides. 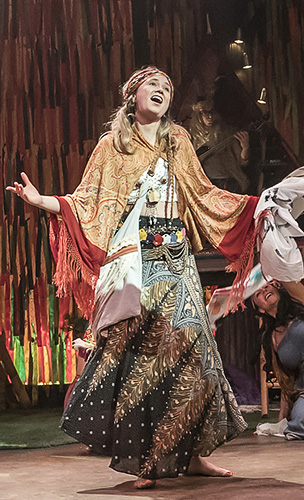 Yet for all its shock value – the greatest of which was its onstage nudity – many who saw the original show claim they remember little. The words and songs have gone through revamps and rewrites over the decades (we now even get an anachronistic mention of warmonger Trump at the start) but, apart from big anthems like Aquarius, Ain’t Got No, Good Morning Starshine and Let the Sun Shine In, there’s still little that’s truly memorable, and this will be all the more true, perhaps, in the much changed world of today.

In Jonathan O’Boyle’s production, which doesn’t quite evoke the authentic atmosphere and characters from a past era totally devoid of information overloads and frenetic social media activity (and widespread tattoos), the sparse dialogue is often proclaimed rather than imparted as one song leads into the next. This means little is properly or continuously engaging until surreal hallucination hits the brutal reality of war in the second act, when long-haired hippy Claude (Paul Wilkins) is finally forced to become, in stark contrast, short-haired, uniformed fighting soldier.

Yet neither cast nor musicians can be faulted when it comes to passion and exuberance in song and dance, their fine singing voices taking turns in strong solos as well as in impressively sung ensemble numbers. Forget languid, lethargic, spaced-out, laid back, unwashed hippies like Neil in The Young Ones; this is a commune of intense, energetic, committed youngsters, fresh, alert, fit and wonderfully coordinated – with just the odd, indulgent episode of druggy haze. Playing without scores, the five musicians on guitars, drums and keyboard are also long-haired hippies, sitting at locations around the set, some in elevated tepee style structures bedecked with wafting ad hoc awnings. In a show that’s more spectacle than message, everyone is wonderfully clad in motley, jumble-sale collections of garments made from multi-patterned, multi-coloured fabrics, floaty, baggy, hairy, fringed or ripped and teamed universally with headband bandanas, a style reflected in an unchanging set of multi-coloured, dangling fringes and streamers. 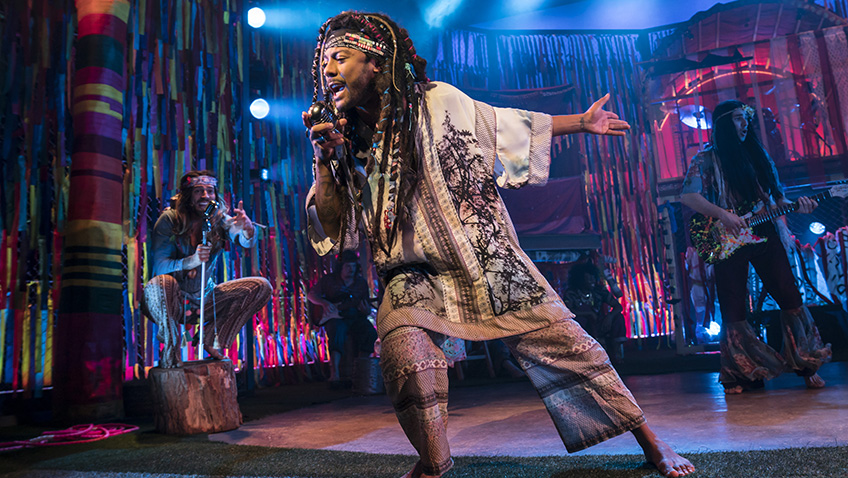 The audience enjoys the cart-wheeling, hand-standing athletics of big singer Jake Quickenden as Berger, whose in-your-face-buttocks greet them early on in the show, while there’s fine singing from one and all, ranging from operatic contributions to Aiesha Pease’s (Dionne) full-throated Gospel moments. By the end, cast members spread into the auditorium to standing whoops, as join-in choruses of Let The Sun Shine In lead into other rousing encore numbers.

The nude scene, by the way, is all over in a very neatly presented, subtly lit flash.

The show now goes on to Brighton, Milton Keynes, Wolverhampton, Cologne and Glasgow.