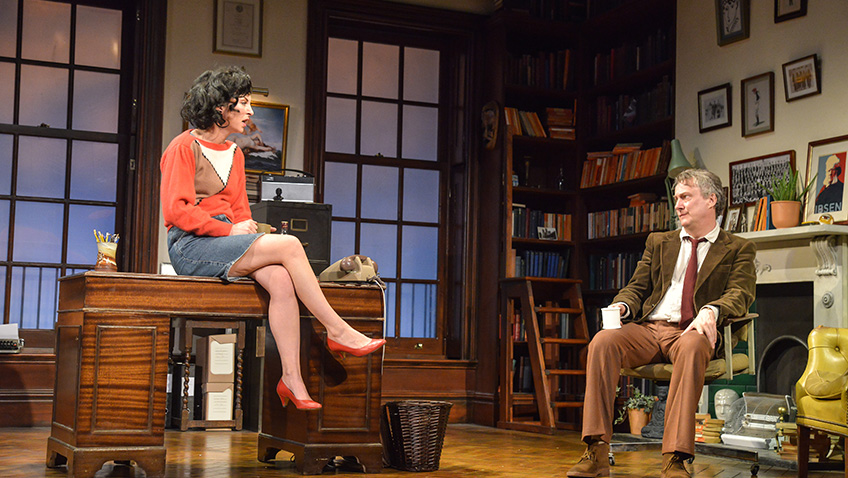 For many, a mention of Educating Rita instantly conjures up Julie Walters and Michael Caine winning multiple best actor and actress awards in the BAFTA best film of 1983. The screenplay for the film was adapted by Willy Russell from his own 1980 stage play.

Forty years on from that stage premiere, the piece still works beautifully. As with other works like Blood Brothers, Shirley Valentine and Our Day Out, Russell creates warm, real characters whose lives, relationships and stories straightaway connect with the audience, bringing them both tears and laughter and making them care passionately from start to finish. All the time, wit and humour bubble through the carefully crafted dialogue, making it flow and sparkle while at the same time revealing the deeper, pithier, more intimate, more philosophical, thought-provoking meanings and motivations that lie beneath. 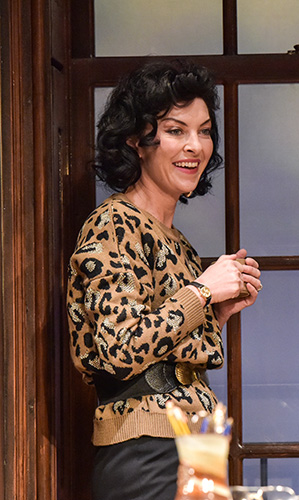 Onstage, the two acts and two characters operate entirely within one space, yet via superb dialogue and masterful acting, the world outside the room is brought inside and we travel mighty distances as characters develop and lives change. Patrick Connellan’s set evokes splendidly the authentic feel of a university lecturer’s study of the day, albeit a generously spacious one, with bulky, dark-wood bookcases, desk and door, metal filing cabinet, tall windows, old-style phone, radio, electric-bar fire and vast clutters of files, pictures and books. Costume changes, and fine music choices from David Flynn serve to separate scenes, giving breathing spaces and moving time on.

In his study, middle-aged, middle-class Frank Bryant, frustrated poet and washed-up lecturer in English Literature, heads repeatedly to his hidden stashes of booze. Seeing himself as a failure and loser, bored and boring in both his personal and professional life, he has no hope or ambition left and wallows in self-loathing. As slouching, dishevelled, disgruntled, cynical, drink-befuddled Frank, whose academic and personal sparks are a tad rekindled, at least, by the phenomenon that is Rita, Stephen Tompkinson is totally engaging. Fully complemented by Jessica Johnson’s terrific, charismatic performance as Rita, the pair elicit delighted whoops and joyous applause all round.

The tender warmth and realism in the two characters and their relationship is a little more subtle than in the film and all to the good. Rita (29) feels desperately trapped in her job, her marriage, and in her expected role in 1980’s life but, unlike weary Frank, she musters the courage and determination to try and break away. She sets out to “better” herself through education, “improve” her class and culture and “sing a better song”. Abandoning her identity as compliant, working-class Liverpudlian hairdresser Susan, she becomes feisty, optimistic Rita, the would-be student who bursts into tutor Frank’s study to embark on an Open University English Literature course (well, sort of), a situation that brings together two fallible, vulnerable, funny, likeable human beings of very different class and culture.

Jessica Johnson evolves brilliantly as she travels from nervous, garrulous uncertainty and uneducated, rebellious ignorance into the hunger and excitement of discovering infinite joy in literature and drama. Eventually, she becomes the more measured, thoughtful, independent, educated woman she longed to be and even has the newfound confidence to be Susan again. In the process, though, her initial wild, irrepressible spirit and vivacious, spontaneous bounce are tamed and she looks down now on her former self. She may think she’s singing a better song but Frank knows it’s really only a different song, a song he once sang himself. Where their new paths will eventually take them is, of course, uncertain.

Merseysider Willy Russell, a hairdresser himself for six years, has created such a compelling story of universal human flaws and delusions, of dreams, strivings, ambitions and complicated relationships that it still works today even though the world and our society have moved on in many ways, while fabulous performances from the Tompkinson-Johnson combo add their own magic to the mix.

The show moves on next to Cambridge, Malvern and Darlington