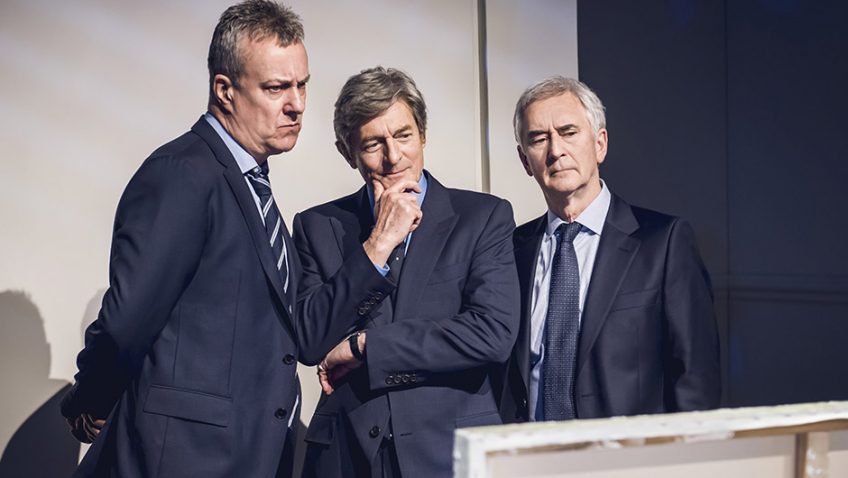 For the full ninety minutes of this one-act play, Nigel Havers, Stephen Tompkinson and Denis Lawson carry their audience smartly and stylishly through a series of fast-moving ups, downs and round-and-rounds, keeping them laughing all the way. Playwright Yasmina Reza, though, sees her play, which premiered in France in 1994 and won an Olivier award in 1998, as more of a tragedy. And so it is, for just like the controversial artwork at the centre of the play (a painting of white lines on a white background!), the play itself says different things to different people, depending on the angle they view it from. Well, it’s a French play after all – so say no more! And it’s brilliantly translated by Christopher Hampton, into natural, pacy, modern English. 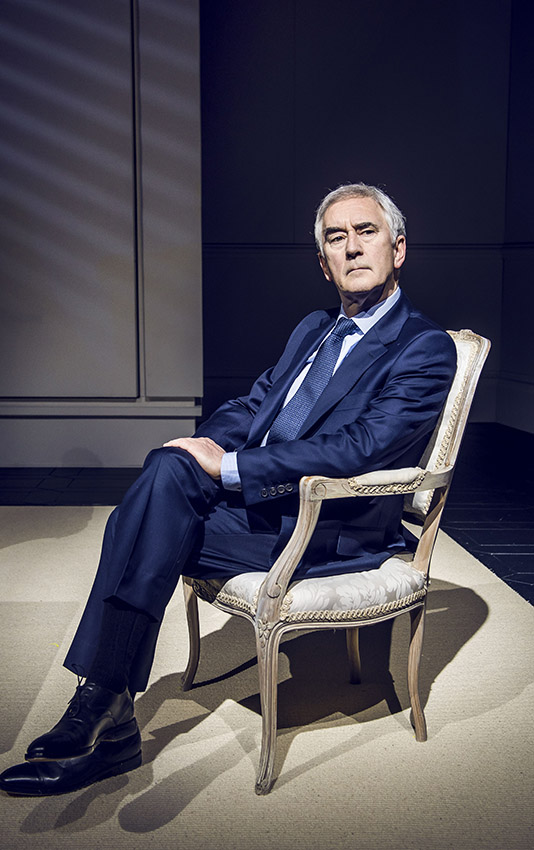 The three men have been friends for twenty-five years, but their views on this white painting, bought for £200,000 by Seneca-reading Serge (played with a privileged, superior air by – guess which one – yes, Havers) quickly has their relationships in meltdown. While Serge claims the white painting is full of nuanced lines and colour, an irritated, scornful, abrasive Marc (Denis Lawson) sees it purely as a piece of s**t. Peace-keeping, not-that-bothered Yvan (Tompkinson), sees it both ways at different times, or claims to. It’s the clever interplay of the bickering characters that maintains interest and momentum as they speak in fast-changing pair combinations, as a trio, or in interspersed solo bursts, in which each confesses his true feelings directly to the audience. In arguing over the painting, loyalties and perspectives swap back and forth, while personal arguments, insults and confessions on wider matters naturally spill out.

Big show-stopper is Tompkinson’s wonderful performance as stressed, depressed Yvan. The magnificent delivery of his protracted outpourings brings howls of laughter all the way and ends in well-earned applause as he relates every ridiculous yet true-to-life detail of the ludicrously escalating crises, caused by family in-fighting over… wedding invitations.

Yes, English audiences like to laugh, but that doesn’t mean they don’t appreciate, at the same time, some of the deeper, underlying seriousness. In fact, if we fancy, we can start unpicking a delicious philosophical knot even before the play begins. Onstage, the blackness of a black backdrop is sooty perfection. Beautifully installed at its centre is a lit window – wait! No, not a window, but the strutted backside of a canvas, a painting. Already a huge, universal question arises: how do we know what lies behind and beyond what we can actually see? Deep, or what!

As the play progresses and friendships buckle under squabbles over the merits and meaning of Serge’s plain white painting, Reza’s work prompts deeper ponderings – and not just on the value of friendship or whether the price put on a work of art is a deception that’s really all about the standing of the artist. Instead of art, these three friends might be arguing about anything at all – politics, climate change, a hairstyle, a trifle recipe, a world war, each offering conflicting interpretations and opinions. Something else with humans, too: do we all present different versions, different views of ourselves to different people, and they to us, just like that painting and those three men? And again as with a painting, do we read motivations and meanings into other people’s words, expressions and tones of voice that they simply don’t intend? Escalations in misunderstandings, frustrations and uncontrollable anger, as with these men, lead to tragic disintegration a trillion times a day the world over. But we’re still laughing at least.

So, as we ponder Reza’s skillful observations on human behaviour and interaction, and admire the fine set with its tall, crisp lines and pleasing interplay of light and shadow, subtly enhanced by brief, crisp musical offerings on the likes of the vibraphone, we can still primarily enjoy a jolly good laugh, courtesy of three greatly loved and revered actors.

From now until June, the show runs in Norwich, Nottingham, Bath, Northampton, Birmingham, Cardiff and Canterbury.