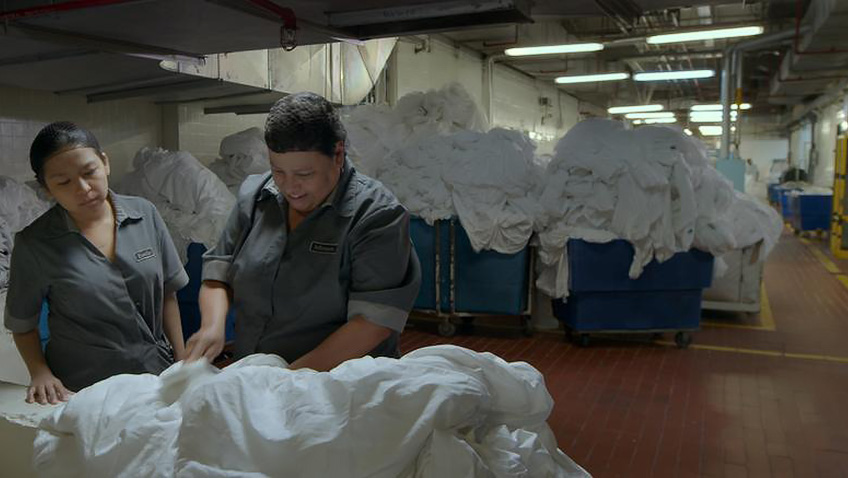 When watching The Chambermaid (La Camarista) most viewers will be reminded of Alfonso Cuarón’s awards’ sweeping and Oscar winning Roma, if not in style, scope, budget, time period or point of view, then in terms of the subject. Both films show us the daily life of a maid in Mexico City. Unlike Cuarón’s live-in, private housekeeper, however, first-time director and co-writer (with Juan Carlos Marquéz) Lila Avilés’ maid works for the high-end Hotel Presidente Intercontinental in Mexico City, one of those characterless and anodyne hotels that could be anywhere. If the plot is almost non-existent, and the dialogue is minimalist, Avilés’ curious camera, and the canny actress Gabriela Cartol, reveal a lot more than we realise.

Each time Eve (Cartol) enters a hotel room she resembles a horse trainer facing a new stud. She pauses long enough to take a good look and assess the situation before tackling the monster in her methodical, efficient but thorough manner.

Most of the time it is obvious if someone is still in the room, but not always. Facing a super king-size bed that looks like it was rummaged through for hidden cash, she eventually, and quite literally, stumbles across its frail occupant, hidden by the displaced duvet on the floor, and half under the bed. She helps him up only to be shooed away like a fly, either because the man speaks no Spanish, is spaced out, still asleep, too embarrassed or just plain rude.

Arguably the most interesting part of the film is these encounters with guests. Even stranger than the man with the traumatised bed is an unpleasant, pudgy, hirsute guest who is always in front of the TV and calling for extra amenities. Ever obliging, unquestioning and non-judgmental, Eve brings more packaged slippers, soap, shampoo, complementary bathrobes and towels to the man who seems to be stockpiling amenities. When she enters, the guest shuts out, ‘more toilet paper’ without even acknowledging Eve’s presence.

Some guests do notice Eve, and a couple are even civil. An elderly Jewish man waiting for a lift politely asks Eve if she would press the button for him, while a harried new mother from Argentina, in Mexico City asks Eve to watch her infant while she takes a shower. Apparently the woman’s businessman husband does not have the time to give his wife a break. If the annoying mother never stops talking and puts Eve off her tight schedule, at least she pays her and is sincerely grateful, even mentioning (the unrealistic) idea of working for the family back to Buenos Aires.

In a startling scene a window-cleaner notices Eve, too, through the large glass windows that afford phenomenal views of the smog covered city. Eve decides to reward his gaze with a sexually alluring performance on the perfectly made bed.

While we are observing Eve, she is observing the personal belongings of the guests, all of whom can afford things that she cannot. Her interest is less in the material worth of the items than as aides to imagining the lives that rich people lead. 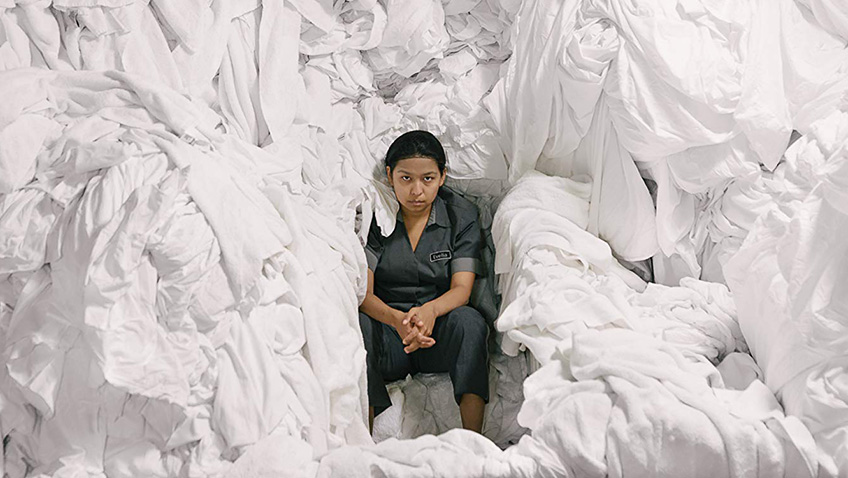 Gabriela Cartol in The Chambermaid

Eve, is 24, ordinary looking with a lovely smile, short, of medium weight, and extremely economical with words, is invisible in the teeming city hotel and easy to take advantage of. Even the hotel staff try to sell her things to supplement their wages. Eve is as vocal as she can be in asking for a red dress that was left in a room and which she returned to lost and found. Since no one has claimed it, the dress is now hers, but so too, Eve feels, is the higher paid job cleaning the 42nd (VIP) floor. If there is a plot, it revolves around this coveted job.

In a furtive phone call to her child-minder, Eve reassures her that she will be paid when Eve gets the 42nd floor job. She is hopeful as her supervisor, though nit-picking, informs her that she is a good worker.

In her study of a chambermaid Avilés also provides a fascinating glimpse at the inner workings of the hotel and the interaction between the service personnel. The union apparently sponsors English and maths classes (Eve is given Jonathan Livingston Seagull, presumably because she might identify with the bird who is frustrated with the materialism, conformity, and limitation of a seagull life). Toward the end of the film it seems the classes have been abruptly cancelled right before the exams that would deliver a certificate or degree.

In one class Eve meets the gregarious, laughing and outgoing Miriam (Teresa Sánchez) who amuses Eve with her nickname, Minitoy. We have seen the way the maids help one another by filling in for them, and when Eve leaves a period stain on a bed she should not have been sitting on, she seeks out Minitoy on the second (laundry and services) room. But trading jobs has its consequences as Eve discovers when Minitoy repays a debt cleaning some of Eve’s rooms and Eve receives her first poor report.

This report, coupled with the news that Minitoy has been called to the 42nd floor on an emergency because she speaks English does not bode well for Eve’s promotion.

The Chambermaid is an unpretentious, well-made and astutely acted film, but it may be a bit too understated for its own good. While The Chambermaid overlaps only slightly with two other South American maid films, Sebastian Silva’s The Maid and Anna Muylaert’s superb The Second Mother, these films have more of a dramatic narrative and are true character studies that also touch on exploitation and insurmountable class divides with humour and insight.