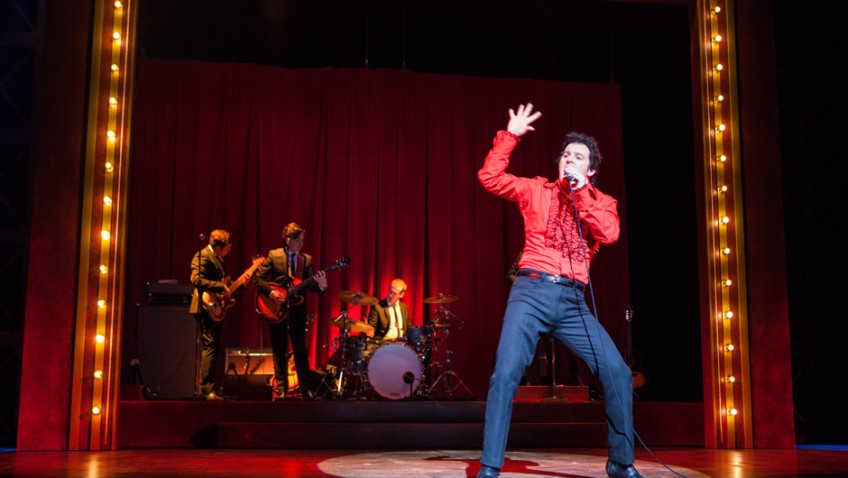 A story of Tom Jones – The Musical

As a youngster, Tommy Woodward was a scruffy little ‘erbert. Eventually, though, that scruffy little ’erbert became a big Welshman with a tiger in his tank – Sir Tom Jones aka The Voice. For this volatile, hard-drinking, fist-fighting son of a hard-working miner (a dad he greatly admired) the road to fame and stardom was full of struggles and setbacks. It was as much a struggle, too, for his wife Linda, pregnant by him at 15, married to him at 16 and right through to her recent death. Without Linda’s long-term support and self-sacrifice, it’s quite likely Tommy would never have made it.

Theatr na nOg (Theatre of Eternal Youth) tells their story in a simple, straightforward manner, narrator Jack (Phylip Harries) always on the sidelines to pop further facts, comments and quips into the drama, as well as to add his saxophone skills to the final, exhilarating musical numbers.

Projected backdrops carry the audience nicely from pithead and mill to working men’s clubs, to the kids’ family homes in Pontypridd and off down to London. Still, handsome though the backdrops be, it’s a bit discombobulating, in a seasick sort of way, to watch wallpaper rippling and entire rows of terraced houses wavering and rolling in the breeze before your eyes.

Far more solid is the music played on the onstage stage. Vibrant, exciting musicianship comes courtesy of drummer Kieran Bailey (Chris), bass guitarist John McLarnon (Vernon), rhythm guitarist Tom Connor (Dave) and lead guitarist Daniel Lloyd (Micky) who together back Tom as The Senators. To recreate the commanding presence, charisma and powerfully strong voice of the main man is, of course, nigh on impossible, but Kit Orton does a fine job. His voice tone is spot on at times, and he can certainly gyrate his nether regions in effective directions. When, under streams of coloured lights, he lets loose on It’s Not Unusual, Delilah and Sex Bomb in the big finale, fans, both young and more mature, spring up all over to sing, wave, whoop and dance.

This is not (thankfully) a musical where all and sundry burst into unnecessary song at the drop of any hat that’s not kept on, but, to the obvious delight of fans and music lovers, it’s still very big on the music front. Meanwhile the story of Tom’s success in fulfilling his dream of singing to all the world – and just about to all the universe – pays fitting tribute, too, to his late wife, Lady Melinda.