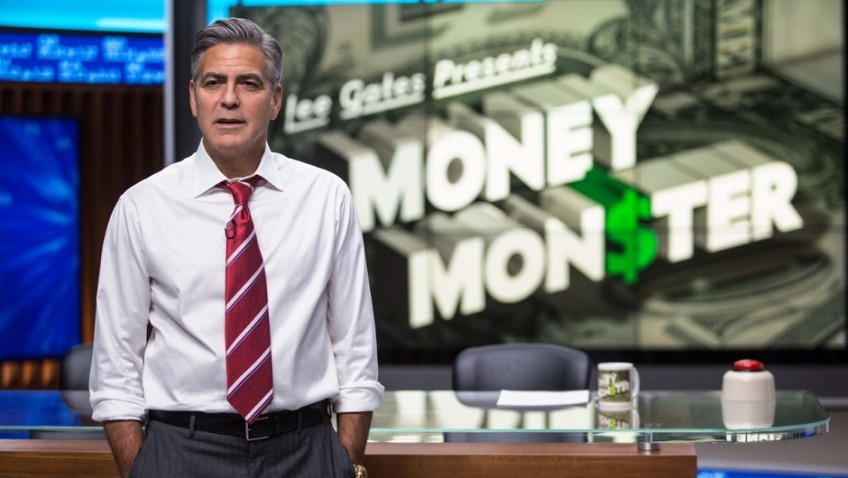 The prospect of a new film directed by two-time Academy Award winning actress Jodie Foster is still a draw, despite the fact that her talents as director (The Beaver, Home of the Holidays) have yet to reach the heights of her acting. This is where George Clooney, Julia Roberts, Dominic West and up-and-coming British sensation Jack O’Connell come in. Combine that cast with a crowd-pleasing story about a little guy who confronts Wall Street on live television and any director will look good.  And, for a while it works. Then you start to realise that you are not all that engrossed in this far-fetched and surprisingly lacklustre satire on corporate greed.

Financial guru Lee Gates (Clooney) is the Jerry Springer of financial cable television with his popular programme, Money Monster.  His showmanship (he dresses up, he dances, he prances) might discredit his credentials in the eyes of the well-informed businessman and Wall Street investor, but when lorry driver Kyle Budwell (Jack O’Connell) inherits $60,000 from his late mother, he buys IBIS Clear Capital stock, Lee’s top tip for a safe, sure winner.

Just as Kyle is making his way past the security guards carrying two boxes for delivery to the show, Lee is putting a gloss on the news that IBIS’s stock was wiped out due to a ‘glitch in a trading algorithm.’   Kyle has come on the show to represent the little guys who collectively lost $800 million while IBIS CEO Walt Camby (West) is nowhere to be found. Kyle pulls out a gun on live television and straps a dodgy looking bomb to Lee’s body.  Kyle announces that he will keep his hand on the detonator until he is given a satisfactory explanation.

Lee turns to IBIS chief communications officer Diane Lester (Caitriona Balfe) who was waiting to go live on air, but her rehearsed, hollow company line that blames ‘an algorithm’ only winds Kyle up. Nor he is placated by an offer of full compensation. A humiliated Diane silently agrees with Kyle verdict that’s it’s too little, too late.

Naturally, there’s a lot of panic and fast thinking going on as police snipers circle the building and Money Monster director Patty (Roberts) ushers to safety all but the core crew, including the publicity hound cameraman, Lenny (Lenny Levito).  Patty, the long serving director, must be regretting that she hadn’t taken up her new job with the competition earlier.  But for now, Patty and Lee decide to do some proper investigative reporting and give Kyle what he, and increasingly, what Lee, Patty and Diane want: the truth.

All this sounds like it must be a thriller. The script, by romcom writer Jamie Linden (Dear John, 10 Weeks), comic buddy movie star Jim Kouf (Rush Hour) and TV episodic writer Alan Di Fiore, plays like a black comedy in which you never believe that Lee’s life is in danger.  If the film had focused on the improbably rapid and easy investigation into conman Walt Camby’s business practices, the film might have had more tension.

While Clooney, and particularly Roberts, demonstrate why they are worth the percentage of box office deals, it might have been premature for Derby-born actor O’Connell (Starred Up, ’71) to travel to Hollywood, even under the wing of his Unbroken  director, Angelina Jolie.  The 26-year-old has been known for his natural, instinctive acting and nuanced characters in such films as Starred Up and ’71, but here he gives a flat performance with a sneer glued permanently to his face.

Money Monster has been compared with home/business invasion, hostage and financial greed thrillers from John Q, The Negotiator, Wall Street and Die Hard. But the film with which older viewers might compare it unfavourably is Dog Day Afternoon.  In that film, too, a young, unstable man (played by Al Pacino) enters a building with a plan involving the taking of hostages.  As with Money Monster, the police surround the building, a cheering crowd forms, TV cameras capture the events, and the police bring in the man’s wife to talk sense into him.

In Money Monster the police actually bring in Kyle’s pregnant girlfriend Molly (Emily Meade).  But here the police and the filmmakers get it all wrong as bringing in Molly is like a bringing a match to petrol. She’s a shrew who lashes out at Kyle in a one-sided conversation that needed a bit of tenderness and insight.  For unlike the young man in Dog Day Afternoon, Kyle is not a sympathetic character.  We understand his anger, but he wouldn’t have complained had he made a killing with IBIS, despite the money coming from the manipulation of the stock market through illicit mining operations in South Africa.   Molly needed to have a real conversation with Kyle so that we start to care when the snipers get trigger-happy.

In that way, too, Molly, who is, after all, pregnant with Kyle’s child, would have contributed to the feminist slant to the film. Patty (with whom Jodie Foster must sympathise) is the steady head and reliable-hand behind the attention-grabbing Lee Gates.  Diane, the abused, token woman at IBS and long suffering girlfriend to the duplicitous CEO, shows that hell hath no fury like a woman doubly wounded.

Foster keeps the film moving and Money Monster is never boring, though it loses momentum by turning into grand-guignol.  It lacks the satirical edginess and hard-hitting anger that would turn an enjoyable night out at the Cineplex into a memorable experience.