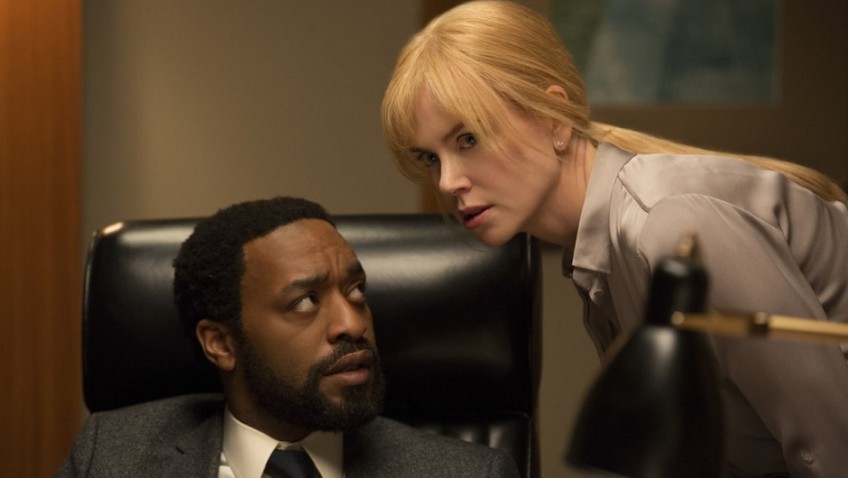 A trio of stars appear in a disappointing remake of a brilliant Academy Award winning film.

Joyce Glasser reviews The Secret in Their Eyes

If you are going to remake a great film, that also happened to win the Academy Award for Best Foreign Language Film, it’s wise to have a reason to remake it– beyond the inconvenience of subtitles.   Both during the film and for sometime after seeing it, I was a loss to find that reason.  What is most surprising about this misguided effort to remake Juan José Campanella’s 2009 masterwork, The Secret in their Eyes is that Writer/Director Billy Jay is a talented and intelligent man.

He wrote and directed two commendable, low budget films: Shattered Glass and Breach; and has written several top commercial screenplays, including Captain Phillips, The Hunger Games, and State of Play.  Moreover, the trio of A-list actors in his cast – all Oscar winning or nominated –Chiwetel Ejiofor (12 Years a Slave, Dirty Pretty Things) Nicole Kidman (The Hours; The Paperboy) and Julia Roberts (Erin Brockovich, Notting Hill) –– might sell the film, but are an awkward choice.

FBI counter-terrorism detective Ray Kasten (Ejiofor) works alongside an investigator from the DA’s office, Jess Codd (Julia Roberts). Ray is attracted to the new Assistant DA, Harvard graduate Claire Sloan (Kidman).  Jess pushes Ray to ask Claire out, but decides not to because she is engaged. Ray and Jess respond to a routine call about a dead body that proves to be anything but routine.  The brutally raped and murdered girl is Jess’s daughter Caroline (Zoe Graham) and Ray, who is a close friend to single mother Jess, was the last to see Caroline alive.  Significantly, the body is found near the mosque that Ray is investigating. Ray tries to prevent Jess from seeing the body as the sick killer has bleached it inside out.

Ray finds a picture Jess has in her home of the police picnic in which her daughter appears alongside a civilian suspect who does not really belong at the office picnic. Ray investigates as the man in the photo is looking at Caroline. When he and his sidekick (Dean Norris) come up with a plausible case, Ray is frustrated by DA Martin Morales’ (the wonderful Alfred Molina) refusal to prosecute due to the suspect’s status as an invaluable informer.

Jess, who has reacted to the trauma physically as well as mentally, decides to move out of LA to a secluded farm, and Ray leaves the FBI, taking a job in the private sector in New York. He returns to LA 13 years later after having worked doggedly to turn up fresh evidence against the original suspect, Marzin (Joe Cole) after his van was mysteriously burnt and vital evidence destroyed.

Jess, or so it seems to Ray, no longer has the will to fight, and rather curiously insists that the case is closed.  Things have, however improved with Claire. She is now the DA, unhappily married and can now admit her feelings for Ray.

The original film deftly juggles a gut-wrenching love story, a murder mystery and a tense political thriller between two distinct periods: the beginning of Argentina’s  ‘Dirty War’ in 1974 and the new Argentina of 2000.  The 25 year period of separation between the unrequited lovers is, in the new version, condensed to 13, during which time America has been attacked on 9/11.   But despite tightening up on security in the wake of terrorist attacks, the situation in the USA was nothing like the state sponsored terrorism of Argentina’s military death squads, and their unchecked political justice that compromises the murder investigation in the original.

Only someone like Julian Assange might argue that the situation in the USA is anywhere near the equivalent to Argentina circa 1974.  It is ludicrous to believe that a man who rapes and murders a cop’s daughter would be protected simply because he was an informant at a mosque.  And Marzin, a white man with no obvious religious affiliation who lives with a stripper is an unlikely Muslim informant.

So it seems that the film’s moral question is whether a criminal who could potentially provide information that might potentially save thousands of lives from terrorist attacks should be allowed to rape and murder with impunity?  It’s hardly a question worth asking in a civilised nation.

The weakest scene in the original is here played out in full when Claire intervenes in a police interrogation because (ready?) the suspect looks down her blouse!!!  Her psychological bullying tactics might work in Argentina, but in the USA, for someone from the DA’s office to extract (or attempt to) a confession out of a suspect without his lawyer present strains credibility.

Beyond the absence of a reason for remaking the film, we have the casting.  Ejiofor is a great actor. He has a certain physical resemblance to Darín and has, it seems, adopted some of his mannerisms, but in this film, he lacks the essential charisma.  He is also too young (Darín was 52 and Ejiofor is 38) for the role of a world-weary investigator (in the original, he had retired to write a book on the investigation) and he never earns our empathy.

Billy Ray makes a curious decision to invent a striking coincidence by turning the mother of the murder victim into Ray’s colleague, Jess.  Beyond the rather far-fetched coincidence, it is difficult to imagine how Jess would be a physical match for the culprit.  Roberts, with the natural look of August, Osage County, is very good, however, and it’s great to see her back on the screen.

The real casting issue, however, is Kidman and Ejiofor.  Far from being the slow-burning, gut-wrenching love story of the original, there is no chemistry between the two leads and no real reason for the two to have spent 13 years apart.  In the original what prevents the protagonist from expressing his feelings is that he is not only much older than the female DA, but intimated by her superior education and class.  Here, Kidman is 10 years older than Ejiofor (though age is never discussed) and neither her education nor her class is an issue.  When the two do get together, you cannot believe they have feelings for one another.   In fact, it is hard to believe in Claire at all, primarily because Kidman, in one of her only bad performances, looks wooden and doesn’t know what to do with the character.