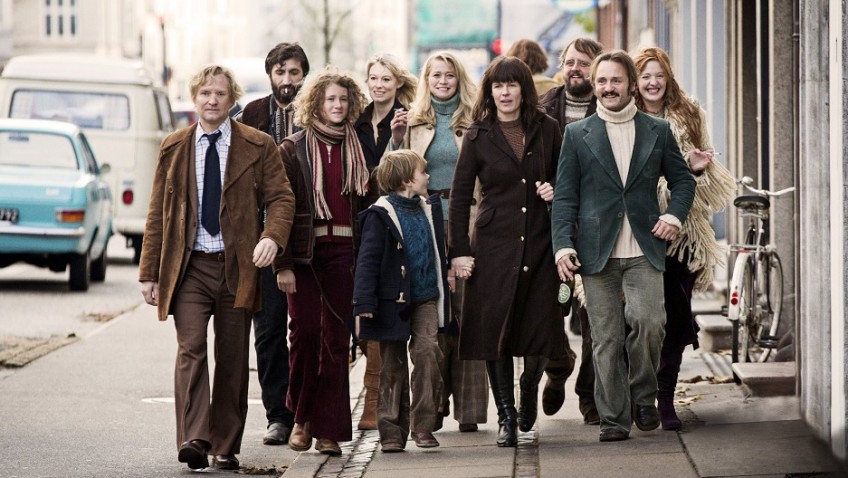 Danish filmmaker Thomas Vinterberg is back

Nowadays, there are not many people who would deliberately choose to share a house with half a dozen strangers or friends when they could live by themselves or with their immediate families quite comfortably.  Back in 1970s Denmark where Director/co-Writer Thomas Vinterberg grew up, things were apparently different.  Judging from The Commune, communal living was an overrated folly even back then.

Vinterberg, now 47, is the youngest of the four Danish exponents of Dogme 95 (Søren Kragh-Jacobsen (69); co-founder Lars von Trier (60), Kristian Levring (59)).  If the Dogme 95 school rules were never adhered to religiously, anti-Hollywood movement did produce several good films, including Von Trier’s Breaking the Waves and Vinterberg’s powerful The Hunt.   Most recently, Vinterberg directed a high profile, but disappointing, English language adaptation of a Far from the Madding Crowd last year.

That experience has sent him back to his roots in more ways than one.  For if The Commune is based in part on his childhood, Vinterberg is still perhaps best known for his 1998 ensemble film The Celebration (Festen) which won the Jury Prize at Cannes in 1998.  The film tells the story of a family gathering to celebrate their father’s 60th birthday that turns into something very different.  In the middle of the dinner, the eldest son, played by Ulrich Thomsen publicly accuses his father of sexually abusing both him and his twin sister (who has recently killed herself).

Like The Celebration, The Commune features Ulrich Thomsen and is an ensemble piece, or is supposed to be, set primarily in a family home where a gathering turns into tragedy.  The gathering, however, is not one of family members, but of close friends, a stranger, and a family of three. The family consists of former architect Erick (Thomsen), who now teaches architecture; his TV newsreader wife Anna (Tine Dyrholm) and their quiet, intelligent and independent-minded teenage daughter Freja (Martha Sofie Wallstrom Hansen), 14 but going on 20.

In 1975 that attractive family is touring a sprawling suburban villa on the coast outside of Copenhagen that Erik has inherited from his estranged father.   He wants nothing to do with it, but Anna takes him on a walk pointing out that they could have tennis and boating right on their doorstep.  Erik wants to downsize and is mindful of the cost of upkeep, but Anna looks at the house as an opportunity to change their routine, and alleviate the boredom of their marriage. She comes up with the idea of inviting friends to live in the house, each paying a substantial fee which will pay for the upkeep.

Rather unbelievably, they do manage to find a sufficient number of people to make Anna’s dream a reality, and at first everyone seems to be happy with the novelty of the idea.  Everyone, perhaps, but the overlooked Freja, who has her eye on an older, very wealthy young man she spots on the bus going to school.

But soon Anna learns that you should be careful what you wish for.   It’s not the squabbles about chores and contributions to costs that begin to affect her work, but the announcement that Erik is seeing a pretty, young student and might be in love with her.   At first Anna, trying to maintain her liberal-mindedness, prides herself at her mature response to the announcement, particularly when Erik reassures her he has no plans to leave the marriage.

But when Erik invites Emma) Helene Reingaard Neumann) to live in the house, Anna begins to have a nervous breakdown. The nature of the story, unity of place and time, handheld camera and vintage palette of colours reminds us that we are not only in the 1970s, but in the hands of a Dogme 95 founder.   The film works best as a straightforward drama about a woman who realises that the ties that bind are not as flexible as she had imagined. It becomes clear that this is Dyrholm’s film and performance, which won the Best Actress Award at the Berlin Film Festival, is faultless. Her performance reminds us of a Cassevetes film, and Dyrholm even resembles Rowlands in her slightly younger days.  But Cassevetes would not have constructed an ensemble cast only to ignore them.

We never get to know any of the housemates, and even Erik is only semi-fleshed out.  Was it the fact that Anna made the decision against his will that caused him to stray as a kind of vengeance? Did he, perhaps, realise that their marriage was in trouble, or is this his way of making himself feel more important now that he realises he will never be a great architect, or even, perhaps, a great teacher?

Of course another problem is that Erik does not have to live in a commune to have an affair with a younger woman, particularly a student.   There is no indication that anyone within the house is having sex with anyone other than their partners.   The Commune serves as the proverbial can of worms that a restless Anna has opened.

There are a few quirky touches, including a young boy who announces he is going to die before he is 9 and the relationship between Freja and the stranger she picks up.  We fear for the worst, but perhaps Peter (Rasmus Lind Rubin) is the best thing to happen to Freja.  The script, co-written by Vinterberg and his regular co-writer Tobias Lindholm, is entertaining but seems to get sidetracked on the way to exploring its premise.