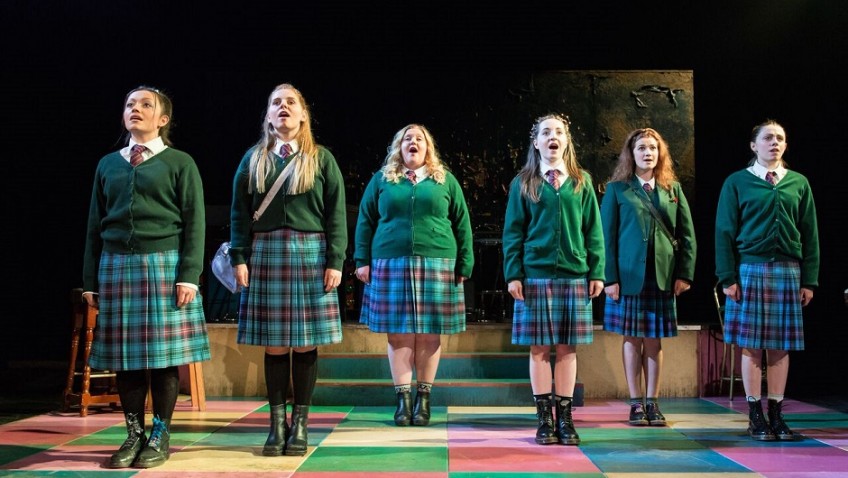 For many readers stories about schoolgirls  will bring back happy memories of Enid Blyton, Angela Brazil, Muriel Spark’s The Prime of Miss Jean Brodie and perhaps, Mary O’Malley’s Once A Catholic. When I think of schoolgirls, I think of Ronald Searle’s St Trinian’s, not the films, but the actual spiky, anarchic cartoons.

Vicky Featherstone directed the play for National Theatre of Scotland and Live Theatre at The Traverse Theatre at the Edinburgh Festival Fringe last year. It won an award and has been on tour in England, Scotland and America since.

Six 17-year-old Roman Catholic schoolgirls come to Edinburgh to take part in a school choir completion. Sex-obsessed, they are determined to get drunk and lose their virginity.

The six actors play all the parts, including the men, and they sing religious choral music by Bach and Handel as well as a selection of ELO covers. There is an all-female three-piece band.

Lee Hall admits that his play is more like a gig than a play.

The most serious and affecting moment is when one of the girls describes an encounter with a young Swedish sailor who is in hospital and dying of cancer.

The play, the production and the acting have a raw energy. Some audiences may find 1 hour and 50 minutes without a break just a bit too exhausting.